Following weeks of testing, Samsung began rolling out the official Android 7.0 Nougat update for the Galaxy S7 and Galaxy S7 edge on January 17.* With the release of the update, new and improved features promise to let Galaxy users get more out of their devices. The update also enables faster speeds for downloading apps and system software updates. Learn more about the major UX changes below. 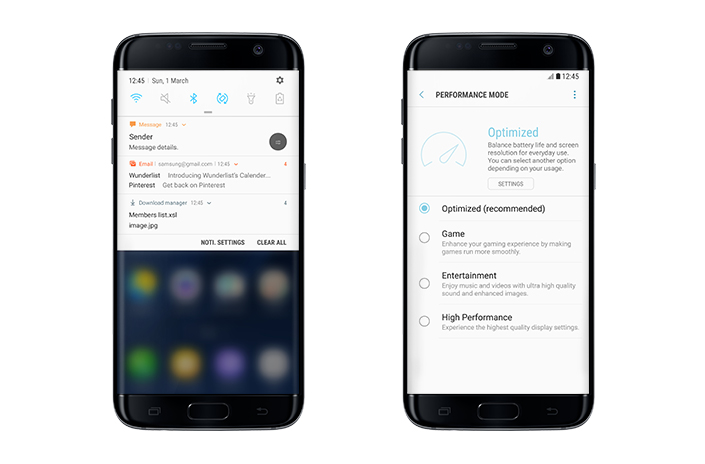 The Quick Panel features a cleaner aesthetic, as titles have been removed from the icons in the panel’s first depth. Icons in the second depth are organized into groups of nine, making them easier to locate.

Users can also utilize the integrated S Finder to locate what they want on their smartphone or the web straight from the Quick Panel. Notifications are now grouped to display information more clearly and also support Direct Reply.

An improved controller allows the window size to be more easily adjusted in split screen view. Also, with a new pop-up window function that supports up to five separate windows in addition to the two in the split-screen view, users can access up to seven apps at the same time.

Samsung Pass, the feature that works as a master key for website login on Samsung Internet, is now supported on the Galaxy S7 and S7 edge. Users can use their fingerprint to log into selected websites and apps with Samsung Pass.** The feature will soon be expanded to support mobile banking app integration.

* Android 7.0 Nougat will be expanded to additional countries on the following devices within the first half of this year: Galaxy S6, Galaxy S6 edge and S6 edge Plus, Galaxy Note5, Galaxy Tab A with S Pen, Galaxy Tab S2 (LTE unlock), Galaxy A3, and Galaxy A8.

** The available functions, features and compatible applications for Samsung Pass may vary by country due to differing regulatory and legal environments.