Samsung announced the launch of its ‘Samsung Paralympic Bloggers Program’ designed to help strengthen London 2012’s legacy. The Program will see 50 Paralympic athletes from 19 countries representing 17 sports and competing in a variety of sporting disciplines, share for the first time their personal behind-the-scenes London 2012 experience; from life in the Village, to training with their coach, to how they pursue excellence and embrace the Paralympic spirit. 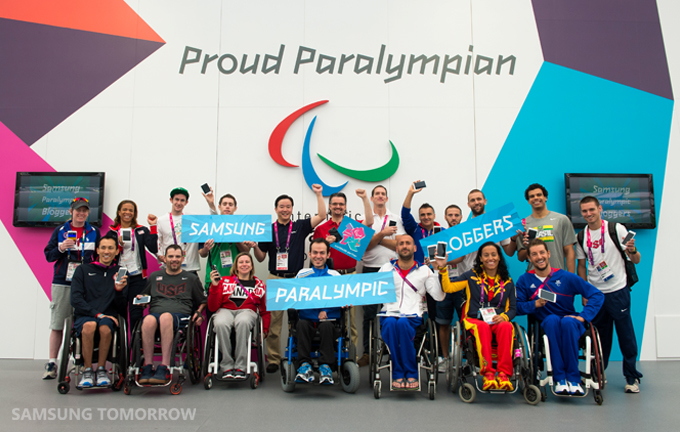 The Samsung Paralympic Bloggers will be equipped with the GALAXY Note that were used in the  Opening Ceremony of the Olympic Games and the application which has been specially developed by LOCOG with all capabilities and needs in mind for all Paralympic bloggers, allowing for all moments to be easily captured using the GALAXY Note’s 1080p Full HD video. The unique content generated by the athletes can then be effortlessly uploaded to the Samsung Digital Hub and across all IPC and LOCOG social media platforms at just the touch of a button. For the first time the public can engage with a number of Paralympic athletes – and take part in the London 2012 Games.
Samsung has designed a pioneering initiative – the ‘Sport Doesn’t Care Who You Are – Everyone Can Take Part’ campaign – to encourage the public to rethink their attitudes towards Paralympic athletes and to get them to engage in London 2012. The Samsung Paralympic Bloggers program is part of this campaign, which challenges spectators to focus on ability not disability and simply to engage with the sport.

Visit the Samsung Digital Hub to follow the personal stories of the Samsung Paralympic Bloggers and find out more about the’ Sport Doesn’t Care Who You Are – Everyone Can Take Part’ campaign [www.samsung.com/london2012]

Samsung, the Worldwide Olympic and Paralympic Partner for Wireless Communications Equipment, will be demonstrating the latest Smartphones technology in the Olympic Village and throughout London for the duration of the Paralympic Games.