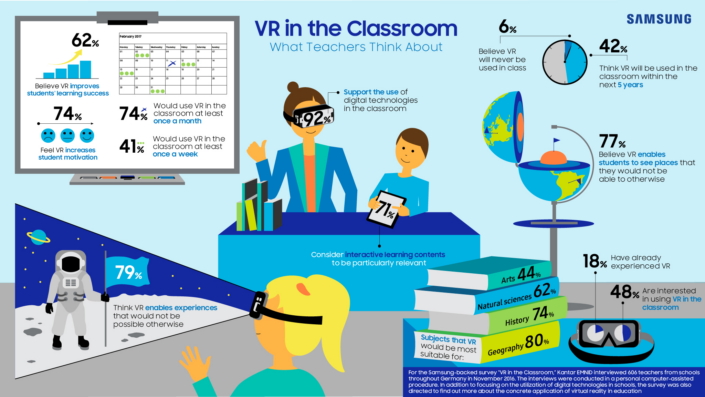 Germany – Digital technologies take education to an entirely new level, opening new doors and possibilities for teachers and students alike. As part of its citizenship initiatives, Samsung Electronics Germany has explored how these possibilities can help reshape education for a better tomorrow.

A recent survey, conducted by Kantar EMNID, a German research company, asked 606 teachers from schools throughout Germany to better understand what educators think about the application of new technologies – particularly virtual reality – in the classroom.

The Samsung-backed survey  “VR in the Classroom”* revealed 92 percent of the educators surveyed support the use of digital technologies in the classroom, while 99 percent of teachers under 30 years of age are in favor it. According to the survey, many teachers already use devices like computers, projectors and laptops when they are available, and the majority of teachers (67 percent) have no difficulties in integrating such devices.

Moreover, there is a great interest in the use of virtual reality (VR). Although only 18 percent of the respondents have already used VR in private or professional contexts, and the technology is only available at 4 percent of the schools, almost every second teacher (48 percent) stated a willingness to try it out in the classroom. For teachers under 30, the figure is relatively higher at 58 percent.

“The survey clearly shows that teachers are very open-minded when it comes to the implementation of new media in school. They recognize potentials unfolding with digital technologies such as VR,” said Steffen Ganders, Director Corporate Citizenship & Public Affairs, Samsung Electronics GmbH. “Therefore, it is necessary to follow their readiness. It is now a matter of enabling teachers to integrate them into the classroom.”

It is commonly believed that experiencing something, rather than just reading about it, greatly enriches a class and improves students’ overall performance. More than three thirds of the teachers interviewed (79 percent) agree that VR enables experiences that would not be possible otherwise. Relatedly, 77 percent believe that VR is an appropriate way for students to explore places they would not usually be able to go to.

In addition to enhancing the educational experience, the majority of teachers believe that the use of VR in class can increase students’ motivation (74 percent) and improve their learning success (62 percent). 58 percent of educators also feel that the use of the technology can help students better understand learning concepts. According to respondents, the subjects that VR would be most suitable for are geography (80 percent), history (74 percent) and natural sciences (62 percent).

Despite the fact that virtual reality is a very new technology, almost half of the teachers surveyed (42 percent) believe it will be used in the classroom within the next five years. If the equipment were accessible to them, 74 percent of educators claim that they would integrate VR into their lessons at least once a month, while 41 percent say they would use it at least once a week.

A New Way to Learn

“To integrate the emerging value of new technologies into teaching, it should now be the top priority to develop concepts in cooperation with teachers for educational policymakers,” Ganders stated.

To better understand what these educational VR concepts might look like, Samsung has collaborated with Cornelsen, a Berlin-based schoolbook publisher. In the joint project, educational VR contents were developed to help students visualize the complex biological processes of the human body. The project was tested by 150 students in Berlin, Lower Saxony and Baden-Wuerttemberg in late 2016.

With VR devices, students will be able to experience firsthand a wide range of educational concepts like these, all while learning in a fun and engaging manner.

* For the Samsung-backed survey “VR in the Classroom,” Kantar EMNID interviewed 606 teachers from schools throughout Germany in November 2016. The interviews were conducted in a personal computer-assisted procedure. In addition to focusing on the utilization of digital technologies in schools, the survey was also directed to find out more about the concrete application of virtual reality in education.