The Story Behind the Galaxy Z Fold2’s Multifaceted Design

If the concept of ‘ability’ is about having the capacity to accomplish something, ‘attitude’ is the mindset that makes that accomplishment a reality. When it comes down to it, the attitude of the Galaxy Z Fold2 can be summed up as a combination of three elements: determination (to redefine what smartphone users can do with their device), flexibility (to seamlessly alternate between work and play), and last but not least, the confidence to stand out. 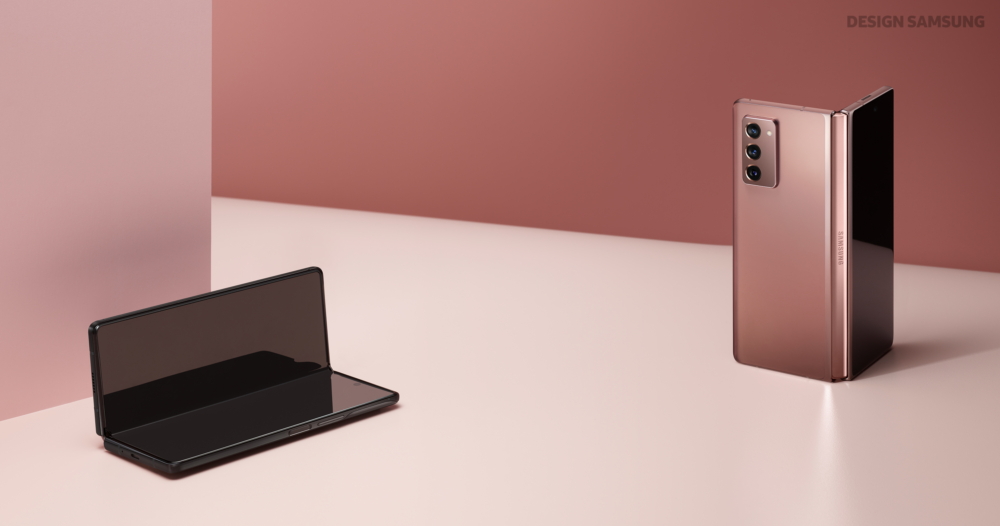 The Galaxy Z Fold2 was designed to empower users to be just as determined, flexible and confident as the smartphone itself. Samsung’s latest flagship device unfolds an entirely new way of life – one that transcends the limitations of yesterday, makes it easier to juggle more roles than ever, and allows you to focus on being yourself.

Follow along as we examine each fascinating facet of the Galaxy Z Fold2’s design.

The Galaxy Z Fold2 has been optimized, inside and out, to take the foldable smartphone experience to the next level.

The device’s delicately refined UI elevates the quality of the overall user experience, while its expanded Cover Screen further enhances usability. The Cover Screen itself has been made larger, measuring a full 6.2 inches, and its bezels have been made thinner. The combination of a 6.2-inch Cover Screen and a 7.6-inch Main Screen makes the Galaxy Z Fold2 similar in size to a typical smartphone when folded, and a small tablet when opened. When viewing content, the thinner bezels and notch-less Infinity-O Display maximize immersion, allowing users to enjoy the full benefits that come with a bigger screen.

The smartphone’s expanded Cover Screen unlocks a variety of convenient experiences. Now, users can do just as much on the Galaxy Z Fold2’s Cover Screen as they could on a typical smartphone’s screen. When folded, the display makes it easy to do everything from viewing content to taking pictures or replying to messages. When unfolded, the device’s Main Screen is handy for capturing and viewing photos and videos.

The Galaxy Z Fold2’s enhanced UI offers users a variety of ways to divide up the Main Screen for seamless multitasking. When texting with friends, attaching photos is as simple as dragging an image from one window to another. Thanks to a newly introduced feature, users also have the option to utilize a single app in multiple windows. This means that you can load an article in a browser in one window, and search for more info on the subject of the article in another. You can also save your split screen configurations to the Multi-Window tray as an App Pair, so you won’t need to go through the hassle of setting up separate windows each time you’d like to launch your apps.

In these uncertain times, more individuals are learning to accept change and broaden their horizons. The Galaxy Z Fold2 is the embodiment of this kind of progression, designed for those who are constantly defying limitations, seeking out new experiences, and boldly facing the challenges of tomorrow.

The Freedom of Flexibility

The Galaxy Z Fold2 adds a bold new chapter to a category that Samsung pioneered with the launch of the original Galaxy Fold. Like its predecessor, the Galaxy Z Fold2 was designed with an emphasis on flexibility and versatility. It adjusts its form to suit the task at hand, perfectly complementing the many roles that users juggle throughout their daily lives. 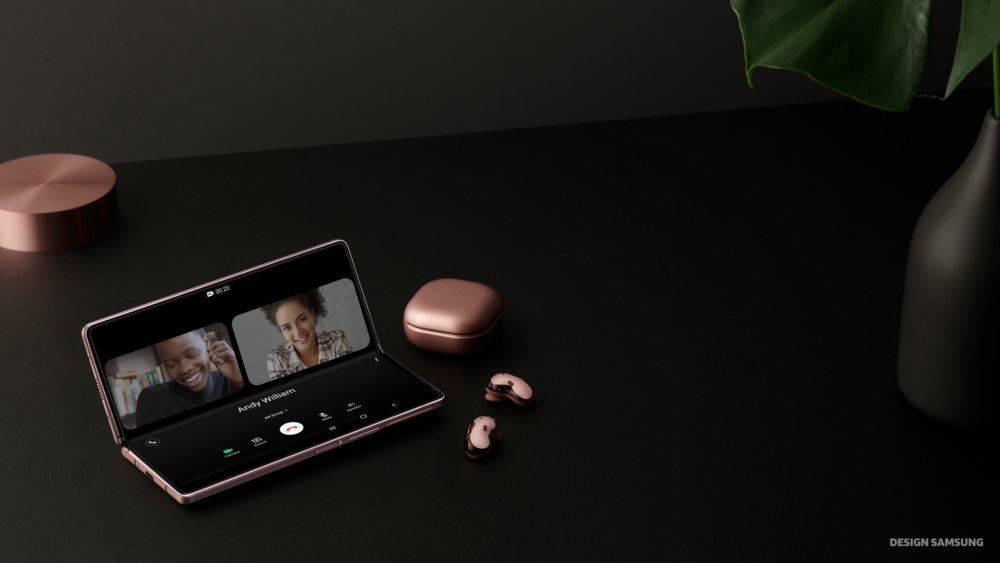 The Galaxy Z Fold2 can be used at a variety of angles to suit users’ needs – opened wide, opened just enough for comfort, or even standing upright in a folded position. The available Aramid Standing Cover takes this convenience a step further by enabling you to prop up your Galaxy Z Fold2 like a picture frame, in addition to allowing you to use your device at any angle you desire. When taking pictures or recording videos, you can fold the device so the camera meets your eye level and view a preview of your shot using the top part of the screen, which gives you a wider field of vision for a much more comfortable experience. 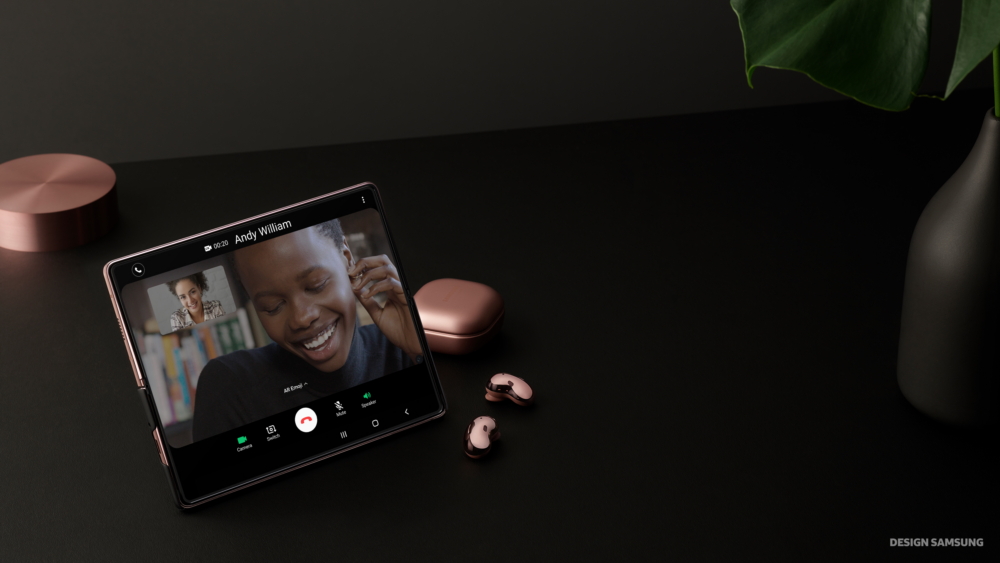 The key here is the Galaxy Z Fold2’s convenient Flex mode, which automatically splits the Main Screen into two sections, allowing you to comfortably view content on the top half and control it on the bottom. The smartphone can also be held upright when partially folded, freeing your hands to handle other things. That’s the beauty of the Galaxy Z Fold2’s flexible design: it offers complete freedom to multitask. This includes everything from displaying videos while folded to enabling users to execute video calls on one side of their screen while taking notes on the other.

We live in a time in which people wear many different hats, as the saying goes, and identify with various personas. Our behaviors and attitudes can vary depending on whether we’re working, resting or having fun, and we may express ourselves differently in our everyday lives and on social media. The fact that our characters and behaviors are so multifaceted and nuanced underscores the idea that none of us can be easily defined with a single identity. The Galaxy Z Fold2 and its many forms and functions cater to modern users’ many personas, offering the perfect tool for tackling the wide range of tasks that we manage every day.

The Confidence To Be Different

With its simple form, consisting of straight lines, and colors that exemplify modern elegance, the Galaxy Z Fold2 exudes a kind of confident and premium style that captures the attention of everyone around it. 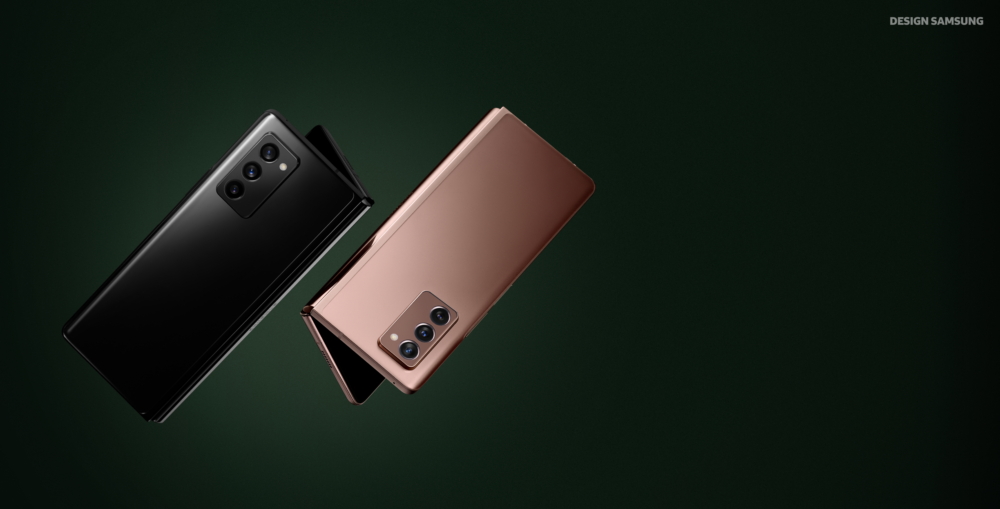 The smartphone comes in a choice of two colors that are sure to strike a chord with all kinds of users. The sensational Mystic Bronze radiates confidence with its alluring and textured haze effect, while Mystic Black features an elegant hue that’s designed to recall the atmosphere of the city.

The Galaxy Z Fold2’s refined form is neat and composed, and characterized by seamless lines coming together to create a whole. Its body and hinge share the same texture and hue, enhancing the device’s unified design – a design that’s not only slim, sturdy and appealing to the eye, but also fits comfortably into your hands for an exceptional tactile experience.

The Tools to Conquer What’s To Come

At the end of the day, our self-worth should not be defined by others, but by ourselves. We all want to stand out from the crowd, but there is a difference between meeting the standards of others and meeting our own. The confidence that comes from knowing who we are and being positive enhances our sense of worth and adds conviction to our every move. Going forward, those who possess a strong sense of identity will be the ones who endure – who navigate evolving trends, and boldly announce their presence.

Just like these individuals, the Galaxy Z Fold2 dares to write its own story and forge its own path. It will do so by offering users as much flexibility as possible, and by enabling them to discover an inner self that’s more confident than yesterday, and possesses the courage to conquer what’s to come.

* The images shown are for illustration purposes only, and may differ from the actual product. Product specifications may vary by country, region, model, and carrier.