5G Is Now, Part 2: High End Performance From Equipment to Devices and Chipsets

At Mobile World Congress 2018, which kicked off on February 26, Samsung Electronics cemented its status as an industry leader by introducing a full lineup of products that will be vital for the commercialization of fifth generation (5G) wireless communications. At the root of this achievement are Samsung’s end-to-end solutions spanning network equipment, devices and chipsets, not to mention a commitment to R&D investment that began in 5G’s infancy, six years ago.

A Strong Foundation Lays the Groundwork for Convenient 5G Technology

Unveiled at the event was a chipset supporting 28 GHz, a 5G spectrum, home devices, base stations and network core equipment. Samsung’s 5G devices, when installed in homes or enterprises, will automatically be recognized by 5G base stations and provided with ultra-fast broadband service of up to 1Gbps, while the network core equipment is responsible for resource management and real-time data traffic distribution.

Central to the initial phase of 5G is the notion of an ecosystem – an ecosystem that covers manufacturers of chipsets, devices and other equipment. Samsung stands out as a key player in the industry with end-to-end solutions that deal with each aspect of this 5G network cycle, enabling early 5G commercialization and stable service quality. This is precisely why Verizon, the largest mobile network operator in the U.S. and an industry leader when it comes to 5G commercialization, has selected Samsung as its vendor. 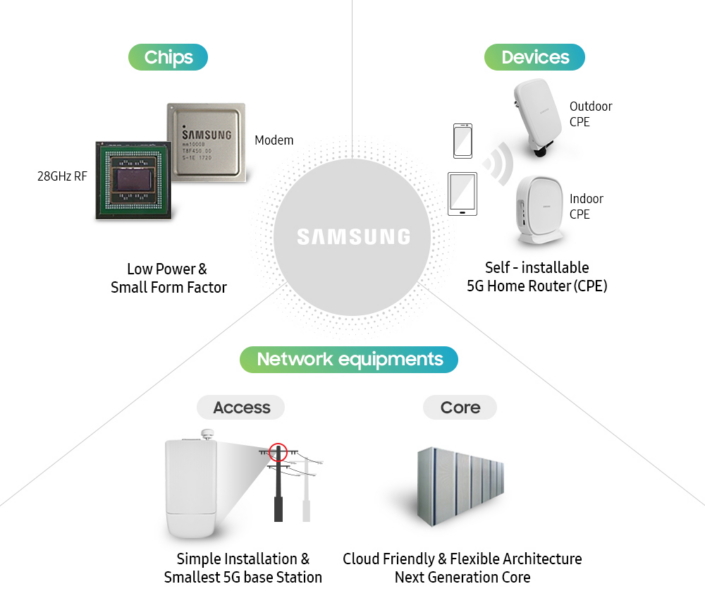 “What it means for a single company to be able to provide chips, devices and equipment is that it can optimize 5G and bring out the best of this new exciting technology all by itself,” said Tim Baxter, President of Samsung Electronics America. “Beginning this year, we plan on peeling off the layers, one by one, to show how a connected world built by a full 5G commercial product lineup will unfold before our eyes.”

Samsung has demonstrated its technological expertise throughout the evolution of communications – from 2G to 3G and 4G. Indeed, the company was the first to commercialize CDMA (Code-Division Multiple Access) during the 2G era. Samsung was also at the forefront of 4G LTE (Long-Term Evolution) innovation as a key vendor in technologically advanced markets such as the US, Japan, Korea and the UK. Its business has now expanded into rapidly developing India, where Samsung is the sole vendor of the country’s 4G LTE nationwide network.

Samsung has been convinced of the potential that the millimeter wave spectrum holds since 2012, and has been investing in 5G R&D ever since. These efforts have resulted in the successful development of beamforming technology that supports directional signal transmission or reception. Based on this achievement, a technology that enables transmission speeds of over 1Gbps and is capable of covering distances of up to 2 kilometers using a 28 GHz band was developed and demonstrated in May of 2013. 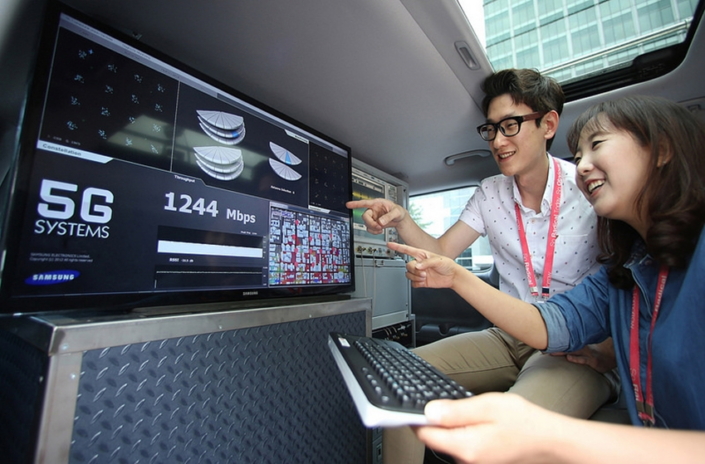 In October of 2014, for the first time in the industry’s history, Samsung Electronics took 5G technology out of the lab and demonstrated its use in a vehicle moving at 100 km/h

In 2014, a seamless data transmission speed of 1.2Gpbs was achieved during a demonstration held in a vehicle moving at 100 km/h. It was the time that 5G technology had reached Gbps-level speed in a mobile environment. When the vehicle was stationary, the speeds reached 7.5Gbps, which was another new record.

That was directly followed by the first successful demonstration of 5G handover technology, which has allowed Samsung to further accelerate 5G’s commercialization. Handover is regarded as a critical technology for networks as it signifies seamless coverage for smart devices when a user moves between base stations. In March of 2016, Samsung became the first in the industry to successfully accomplish a multi-cell handover demonstration by achieving Gbps-level connectivity while a vehicle moved across three 5G base stations at 25 km/h.

In September of 2017, Samsung demonstrated seamless connectivity with a vehicle traveling at over 200 km/h, as well as a successful handover with a vehicle moving at 192 km/h. These remarkable achievements proved that the application of 5G on high-speed trains was a feasible concept.

Around this time, Samsung also successfully proved the capabilities of a 4G-5G intertwined network that binds together three spectrums by linking a 4G LTE network that utilizes the 2.6 GHz band with a 5G network that uses the 28 GHz and 3.5 GHz bands. Interworking between different-generation networks is recognized in the industry as a prerequisite for fostering 5G commercialization. 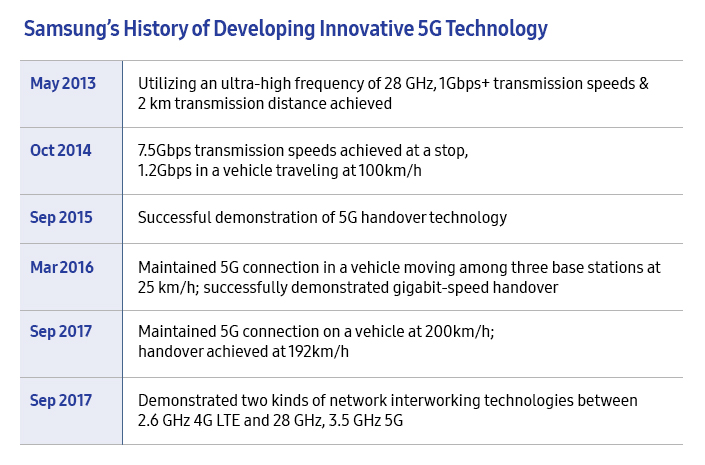 By nature, telecommunications service can only begin once an operator has acquired the rights to use a particular spectrum from its government and established infrastructure with its vendor. It is absolutely crucial that the service allows multiple users to simultaneously enjoy seamless connection anywhere and anytime. 5G commercialization is no exception to this rule; cooperation between operators, equipment vendors and device manufacturers is a must.

Samsung has been focusing on intensifying its technical and business bonds with operators in markets with advanced 5G adoption such as Korea, the US and Japan. The US is the first country to have acquired the 28 GHz spectrum, and it plans on launching FWA (fixed wireless access) service using 5G technology in the second half of this year. Samsung is in the midst of carrying out 5G trial services in key US cities together with Verizon and has already deployed 5G networks in seven of the eleven cities – Sacramento included – where Verizon provides its service. To add to the list are the 5G trials being carried out in Indiana with AT&T, as well as another with T-Mobile. 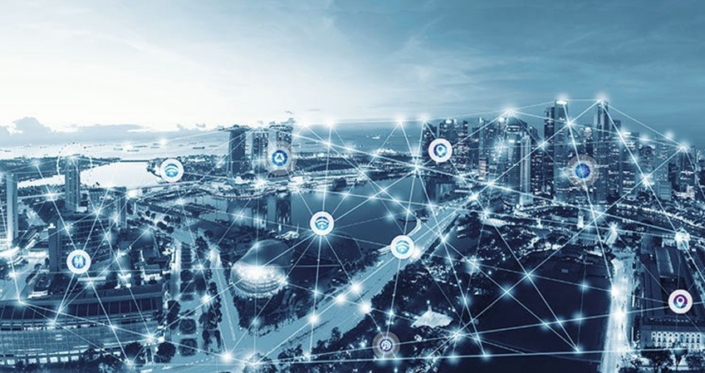 Korea is quickly gaining recognition as a testbed for the latest technologies. In September of 2017, together with the Korean telecommunications operator SK Telecom, Samsung successfully demonstrated, for the first time ever, how 4G and 5G networks can interwork with one another.

Japan has targeted the year 2020 for 5G commercialization, to coincide with a large-scale sporting event that will be held in Tokyo. Together with the country’s leading operator, NTT DOCOMO, Samsung successfully demonstrated the 5G technology in a vehicle traveling at high speed in November of 2016. With KDDI, another key operator in Japan, Samsung conducted a 5G demonstration on a Tokyo highway in February of last year. In December of the same year, the joint efforts extended into a 5G test held on a high-speed train.

Also collaborating with Samsung to accelerate 5G commercialization is the French operator Orange. Together with Korea Telecom and Verizon, Samsung has also established the specifications required for 5G trial services in Korea, as well as commercial FWA service in the U.S.

“Samsung has always been an active promoter of international cooperation with its 5G total solutions at the root,” said Wonil Roh, Vice President and Head of the Technology Strategy Group, Networks Business, Samsung Electronics. “These experiences are a validation of why operators worldwide find Samsung to be the most ideal partner for 5G network establishment.”