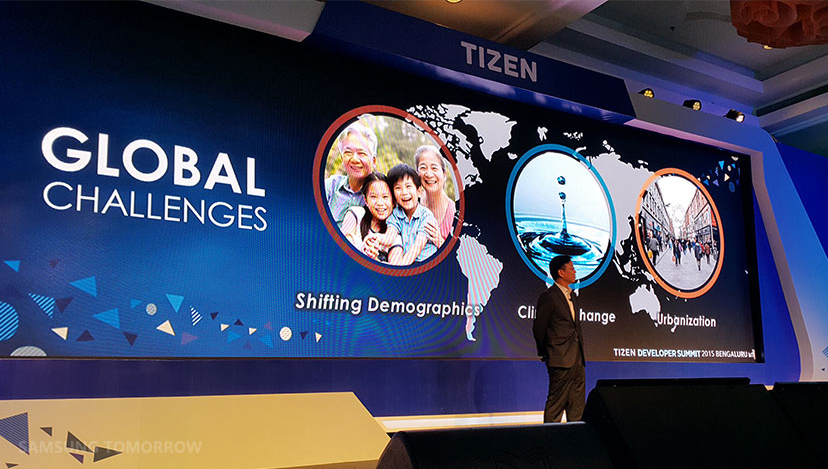 TDS is an annual global event sponsored by Samsung Electronics and Tizen Association to assist local app and platform developers interested in contributing to the growth of the Tizen ecosystem. TDS has also attracted companies and organizations such as InMobi, Unity, Airtel and Nasscom.

TDS offers an excellent opportunity to learn from core Tizen developers and understand the technology behind the Tizen platform, app development, porting, and monetization through the Tizen Store. The two-day event consists of keynote speeches, technical sessions and workshops for app developers, platform designers, and Independent Software Vendors (ISV) to understand the technology in the Tizen platform. Multiple discussions and knowledge sharing sessions are being held to educate, engage and excite existing and potential developers.

“TDS 2015 Bengaluru is significant as nearly half of the apps in the Tizen Store are created by developers from India. This reflects the enormous opportunity in India where a large base of platform and app developers continues to show significant interest to develop Tizen OS and high-quality apps,” said Dr. Aloknath De, Chief Technology Officer and VP-Samsung R&D Institute India Bangalore.

“This is also the first Summit which is being organized in the backdrop of commercially available products, for example, the Samsung Z1 smart phone, which sold over one million units since its launch and Tizen Operating System powered SUHD TV which was recently launched in India.” Dr. Aloknath De added.

The keynote speeches was delivered by Dr. Aloknath De on Tizen platform upgrade features, the need for open platforms, current Tizen devices and the new opportunities in the Internet of Things (IoT) space. Ajay Kumar, Joint Secretary of the Department of Electronics and Information Technology, Government of India, addressed the audience on the ‘Digital India’ initiative and how open source is playing a crucial role in e-governance, entrepreneurship and transforming India into a knowledge economy.

Other keynote speakers included Naveen Tewari, CEO of InMobi, who spoke on the evolution of mobile monetization from banners to native advertising to more advanced feature advertising and its impact on Tizen developers. Sanjeev Kashyap, CTO and Head of Satellite Network Group at Airtel, spoked about the growth and change in Indian DTV viewership patterns, the unique application demands of Samsung Smart TV and plans for upcoming applications on the Tizen platform.

The Tizen OS offers application capability across mobile devices, wearables, TVs, and other home appliances, and this potentially paves the way for incredible convergence opportunities across device categories. TDS offers unique and innovative solutions for a wide range of content creators and it is the best way to interact with local developers and companies working within the Tizen ecosystem.

It was also announced that the next Tizen Developer Conference (TDC) will be held September 17-18, 2015 in Shenzhen, China. TDC is an annual event for open source and app developers who are interested in contributing to the growth of the Tizen ecosystem worldwide.

Tizen is open source and provides an excellent experience for both native and HTML5 application developers. For additional details about the conference and sessions, please visit http://tizendevsummit.com/index.html