Galaxy Note 4: What we know so far

The new Galaxy Note 4 is here and we already know that there is a lot to love about it. For example, if you are a selfie (or wefie) advocate, you will love the 3.7MP front facing camera with f1.9. It has a default 90-degree shooting angle and up-to-120 degree wide angle, meaning there is no need to reach your arm out like a stretchy superhero to get everyone in the picture.  But there is more. Here is what we know about the Galaxy Note 4 so far.

“Ba de ya, never was a cloudy day” Actually, 2011 could have been a risky year to introduce the Galaxy Note considering the general consensus for smart devices with larger displays. However, Galaxy Note ushered in and established the identity of the new term “phablet”, not for its display size, but instead for its functionality. Following its predecessor’s spirit, Galaxy Note 4 is all about experience and usability, but with some additional upgrades.

2. Galaxy Note is a series

Galaxy Note has been here for a while. The first model being introduced in October 2011, Galaxy Note 2 hit the market in 2012 and Galaxy Note 3 in 2013.  With the launch of Galaxy Note 4 coming soon, will it live it up to its reputation? Click the link above to check out the key specifications of the Galaxy Note series so far. 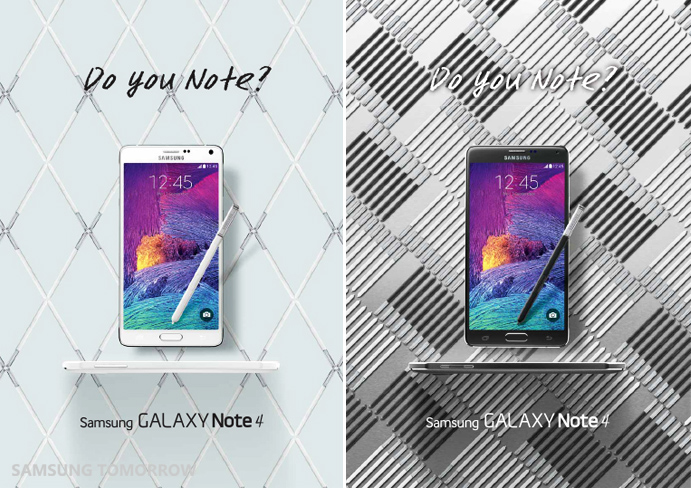 The sole reason Samsung decided to implement S Pen in the Galaxy Note series is to provide the best way to utilize the big screen. The sharp end and thin and solid stick of the pen enables users to be more accurate and efficient, and have more control when using the Galaxy Note devices. Once you go S Pen, the fun never ends.

You might already know that many Galaxy devices have been supporting Multi Window, a feature that allows users to work in multiple open windows at once; so you can watch a video clip and take notes at the same time. With the Galaxy Note 4 you can multitask better than ever with all the right features, such as 5.7″ Quad HD (2560×1440) Super AMOLED display, 3GB, Fast Charging & Ultra Power Saving and S Pen.

As we said, these are just what we know so far. We plan to bring you more about the 4th generation of the Galaxy Note. If there is anything more you want to know in detail about the Galaxy Note 4, leave a comment below!