Billiards, a sport dating back to the 15th century, has been enjoyed by a variety of famous faces over the years, including Elvis Presley, Marilyn Monroe and even George Clooney. But one lesser-known lauded billiards player is Woojin Park of the Samsung Electronics Semiconductor R&D Center. A qualified nuclear physicist working in big data engineering, Park has won billiards titles around the world.

To have achieved such accomplishment in not one, but two, demanding fields is an admirable feat. It is through hard work and perseverance that Park has obtained a synergy in his work-life balance – his contribution to his role at Samsung has led the team to win seven major awards to date since 2015. The not-so-secret recipe to achieving this balance? “Practice makes perfect.” 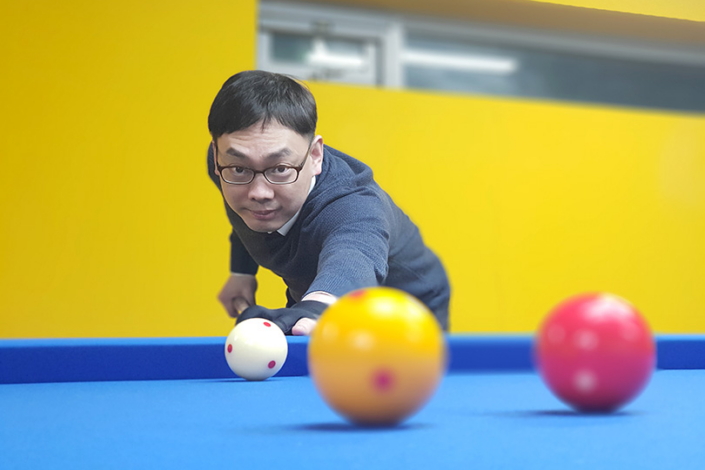 Despite the achievements he has accrued over his 20-year billiards stint, Park in fact did not pick up a cue stick until he had finished high school, when his father – the owner of a billiards club – taught him the basics. “It runs in the family,” jokes Park. Upon entering university to study nuclear physics, he quickly excelled at the sport, averaging a 300 score (30 points) – an incredible score for a beginner where a 500 score is considered expert level.

After two years of improvement, Park turned to focus on 3-cushion billiards. This popular form of carom billiards is played on a championship level, where the rules stipulate that a player must hit the rail cushions on the table at least three times during each shot.

As a sophomore, Park was managing a 400 score in his games, and took the opportunity on his breaks from study to tour Korea challenging the best players in different regions. During this time, he earned himself a reputation as a leading player and had the opportunity to study under the world-famous billiards player, Sang Lee.

Park’s involvement in international billiards playing came about through a happy coincidence. In 2007, Park was living in Germany working for a research center, and so joined the Deutsche Billiard-Union. Whilst playing a match there, he accidentally – due to his then rather weak German skills – entered himself into a national 3-cushion championship and ended up winning the title. 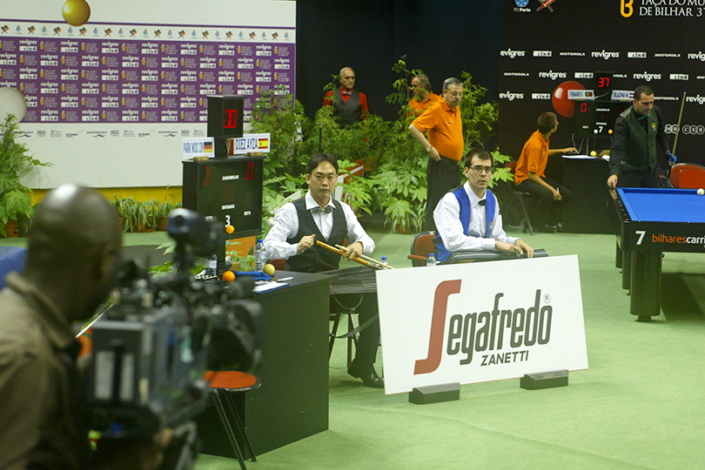 Park represented Germany at the Billiards World Cup in Portugal, 2010

This victory inspired him to work harder at his hobby and, in 2010, his cumulated world ranking qualified him to take part in the Billiards World Cup, in which he represented Germany. Now competing on an international level, Park was averaging a 2,000 score (200 points) in his matches.

Whilst working in Germany, Park’s impressive skill level caught the eye of carom billiards professional Torbjörn Blomdahl, whom Park respected hugely. Realizing that they were living close to each other, the two became good friends. 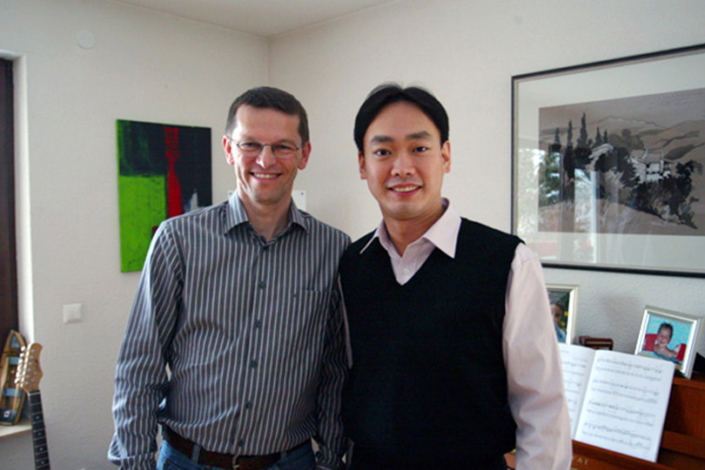 Park during his time in Germany, with mentor and friend Torbjörn Blomdahl

Returning home to Korea, Park continued his pursuit of the sport. “I didn’t enlist in the Korea Billiards Federation as a player as training to do so would take too much time away from my day job. But I did play a role within the federation.” This role includes coaching fellow Korean players. His colleagues joke about how he plans his annual leave around major international competitions.

Though Park currently enjoys billiards just as a hobby, he still aspires to one day make the final selection of the 3-Cushion Billiards World Cup. Park’s passion for the sport is reflected in his impressive list of honors; he is still currently a Pro at the Deutsche Billard-Union and the vice chair of the gameplay development committee at the Korea Billiards Federation, as well as a member of its Future Innovation board.

When Park joined Samsung, his move meant that he would now have space for a billiards table in his basement, along with an array of billiards equipment. Park plays billiards 3 or 4 times a week, often inviting his colleagues over for friendly matches. Though this is by no means close to the routine a training player would go through, this pastime has a way of keeping Park performing his best during working hours; “a game of billiards forces you to concentrate on only the game. This has a meditative effect, clearing your head to relieve stress at the end of a day,” he notes.

While the global recognition Park has received is indicative of his passion for billiards, his respect for the sport goes beyond this. What he enjoys most about billiards is the due diligence required of an individual when playing; “when you reach a certain level, practice is the only weapon you have,” he notes. It also requires its players to be strong, both physically and mentally, a honing technique that has helped Park with his professional as well as his personal development. 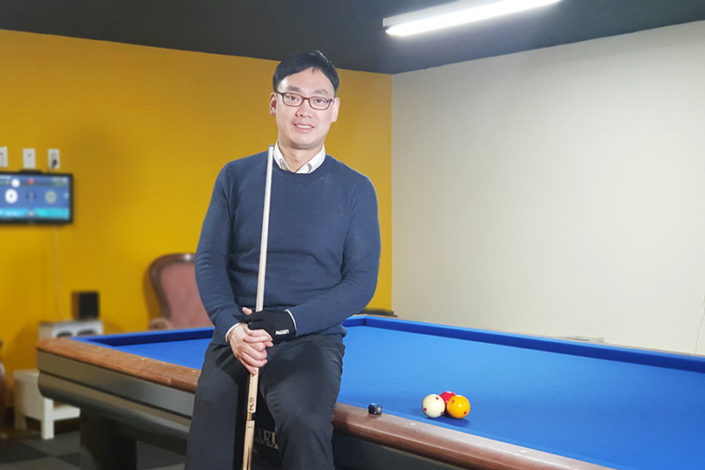 Park’s is a story of dedication and balance, and an enviable one at that. To have become so successful in both fields, Park has worked hard at both of his chosen disciplines, and it is clear that he brings the passion he has for billiards to his work at Samsung – as well as vice versa.

Park is not afraid to combine his knowledge of billiards with physics and big data. Based on his experience in nuclear physics, a field of study that necessitates the use of massive data, Park’s role at Samsung involves big data analysis to the end of enhancing productivity and managing processes in semiconductor manufacturing.

Park, leveraging his expertise in computer technology, was also one of the driving forces behind modernizing the carom billiards scoring system – turning the traditional flip-over cards to a digital board. The system has since been adopted by UMB and is in use in major tournaments including the World Cup and World Championships.

“Billiards is a personal life goal,” Park says. “Like the work that I do, billiards makes me push myself to keep studying, practicing and analyzing.” Throughout the endless collisions Park seems to keep running into – whether it be atomic nuclei, billiard balls or streams of data in the semiconductor production process – he keeps plugging away, lining up his tasks and tackling them one focused stroke at a time. 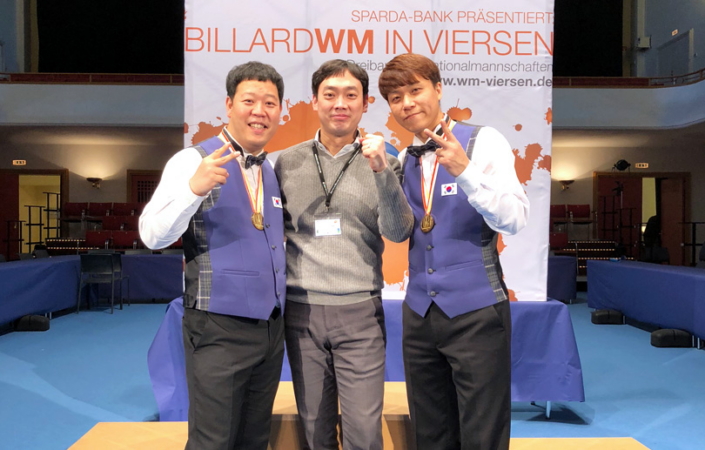 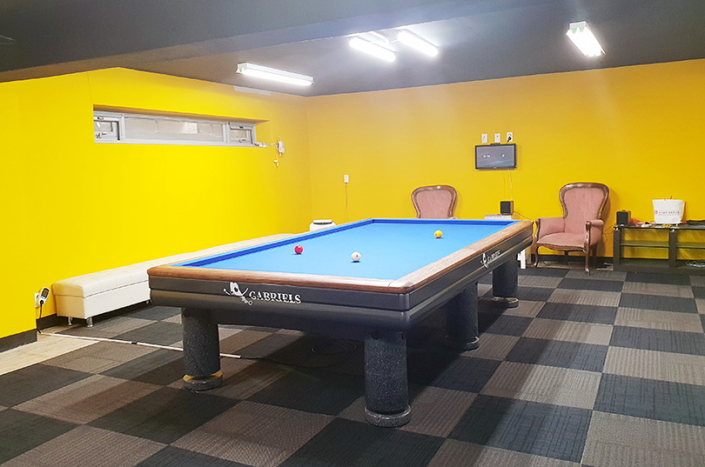