[Interview] Behind the T7 Shield: Samsung Electronics’ Most Durable and Reliable Portable SSD Yet 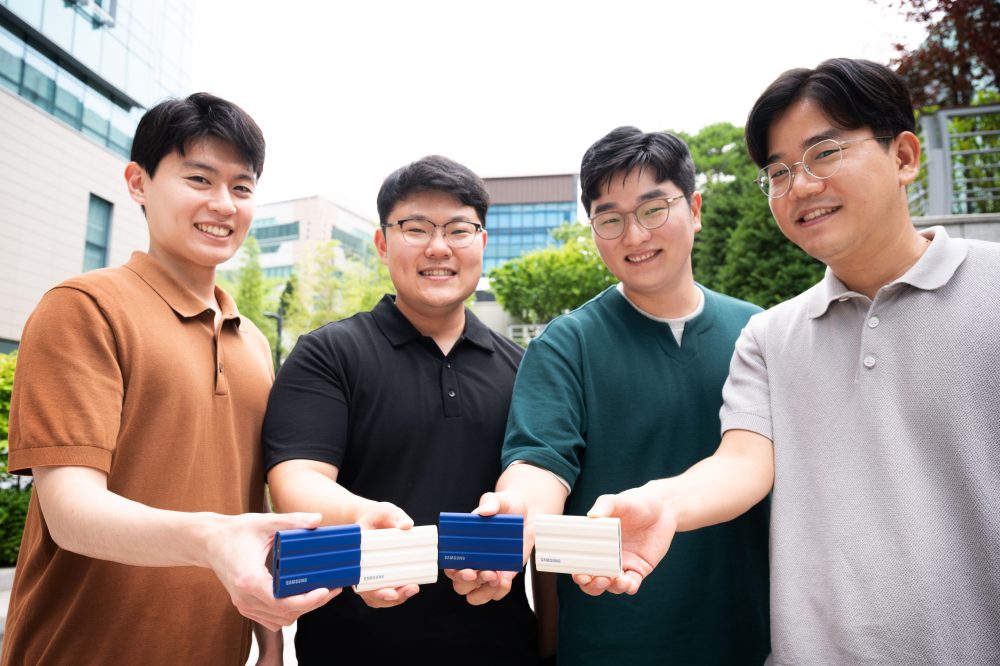 As video creation has become a sought-after profession, and high-resolution cameras and high-definition video have become the norm, storing data safely, easily and conveniently has become more important than ever.

In the past, external hard disk drives (HDDs), also known as hard drives, were the main type of storage device used for saving data. Nowadays, solid-state drives (SSDs) have become the preferred device for external storage due to their fast speeds, increased security, as well as their small size and light weight compared to HDDs.

Samsung Electronics, the world’s No.1 NAND flash manufacturer, has set a new standard for portable SSDs with the launch of the T7 Shield: the company’s newest portable SSD with exceptional performance, reliability and security.

To get the inside story on the development of the product, Samsung Newsroom met with the four developers of the T7 Shield: Minseok Kim, the circuit designer, Hanhong Lee, the mechanical designer, Sangjin Jung, the product planner, and Gyejin Jun, the product designer.

An SSD Above All: A Device Boasting the Industry’s Highest Level of Performance

The T7 Shield Portable SSD is equipped with the latest V-NAND technology and ultra-fast interface Non-Volatile Memory express (NVMe) controller. The main part of SSDs is the memory semiconductor, and more specifically, NAND flash memory. NAND flash is a type of non-volatile memory in which saved data is not lost even if the electricity is cut off. Since the T7 Shield is an SSD product made by Samsung, the top NAND flash manufacturer in the world, consumers can be confident in the product.

The T7 Shield is a follow-up to the T7 Touch, which was an honoree at the 2020 CES Innovation Awards. Not only does it support USB 3.2 Gen2 interface, the most commonly used interface, but it also boasts the best performance in the industry. The 2TB model’s read speed is 1,050 megabytes per second (MB/s). Similarly, the device’s Turbo Write technology provides sequential write speeds of up to 1,000 MB/s, delivering fast transfer speeds all in a device the size of a business card. “These fast speeds enable 1GB of data to be transferred in a second, so transferring a full movie file, around 4GB, with full HD picture quality only takes 4 seconds,” Jung explained. 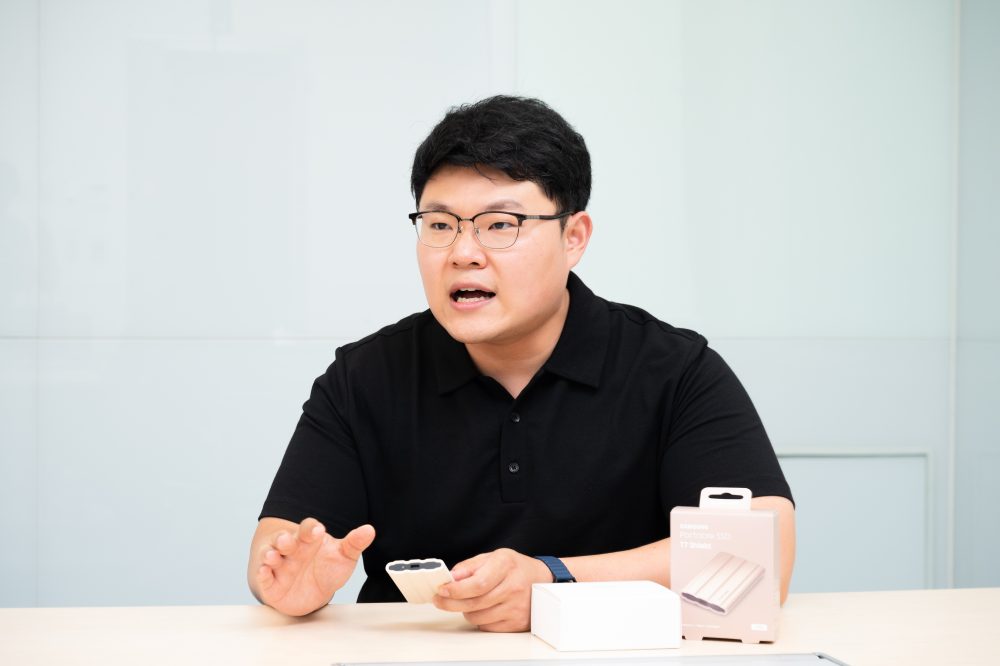 The T7 Shield securely protects data even if the device is lost thanks to its 256-bit Advanced Encryption Standard (AES) hardware encryption. In addition, the T7 Shield comes with Samsung’s Magician software, giving users the ability to manage their device settings. This software allows users to check the performance and status of their device (such as the amount of storage used and temperature), conduct firmware updates, initialize the device and more.

One of the characteristics that sets the T7 Shield apart from others is that it’s waterproof and dustproof. The T7 Shield is a portable device, built to be taken wherever the user may need it. Due to potential exposure to outside elements in different environments, it’s important that the user can take their data anywhere without fear of it being lost or damaged. The T7 Shield is the first Samsung SSD that is IP65-certified as waterproof and dustproof. “An IP65 rating means that the device has an IPX5 waterproof level and an IP6X dustproof level,” Jung explained. “This means you don’t have to worry when using the T7 Shield, even if you accidentally spill water on it or if you are outside on a rainy day.”

“We were able to increase its level of waterproofing by designing the device to have silicon rubber on the exterior with a separate seal,” said Lee. “In order to provide an equal level of performance compared to our previously released products, we conduct total inspections using air pressure. The unique features of the T7 Shield will be even more noticeable in different environments.” 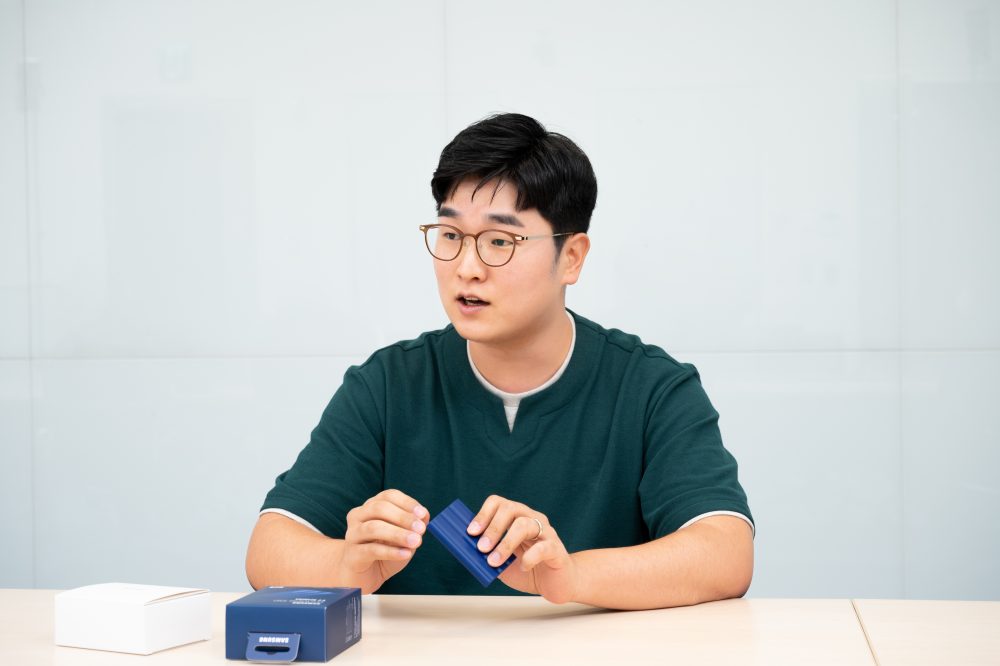 Even though portable SSD products are meant to be carried around, when dropped, data can sometimes be lost from the shock of the fall. However, the T7 Shield is durable enough to withstand a drop shock of up to 3 meters, 1 meter higher than the previous model. “All 4 corners of the T7 Shield have been designed to be protected with rubber, so it is more resistant to external shocks,” Lee said. “There’s no need to be afraid of your data being damaged even if you accidentally drop it while using it in your daily life.”

When using an SSD, there are two issues that may go unnoticed by most users, but pose an inconvenience for heavy users who often transfer large files: lowered performance and overheating. “Consumers were inconvenienced by the lowered performance when working with large files, but the T7 Shield has addressed this through power optimization,” Kim said. “Now, consumers can use the device without experiencing much difference in performance even when storage is full.”

Usually, when a device provides high speeds, it heats up as a result. Some may think that in order to maintain performance when transferring large files, the device needs to generate more heat. However, this is not the case with the T7 Shield. “We’ve minimized heat generation through an optimized power design,” said Kim.

Additionally, the surface of the device is made of a rubber material that has low thermal conductivity, helping users to comfortably handle the device with minimal heat transfer. “We’ve designed the device in line with safety standards so that the amount of heat the device produces is safe even when transferring very large files,” Kim said. 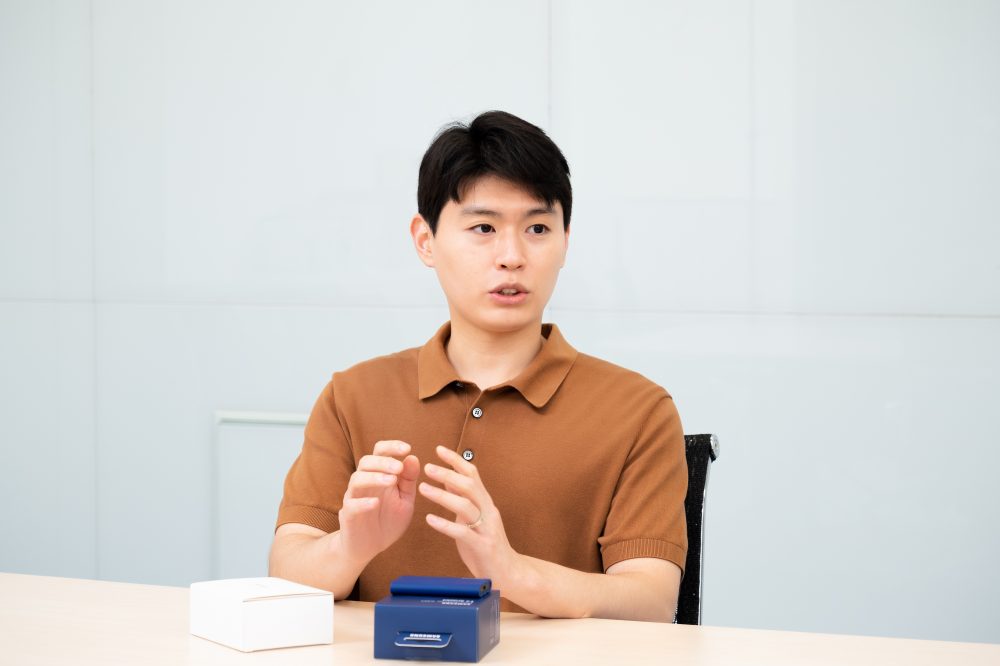 The T7 Shield is compatible with a variety of devices, including PC, Mac, Android smartphones and gaming consoles. It also comes with the two types of USB-C cables (C-to-C and C-to-A), allowing users to connect it to other devices. “Older device specifications, like USB 2.0, support lower electricity, so it was difficult to achieve compatibility across these devices,” said Kim. “But the T7 Shield detects the connected USB accessory and adjusts the device’s power accordingly.”

A Robust, Sophisticated Design and Various Colors for All Customer Preferences 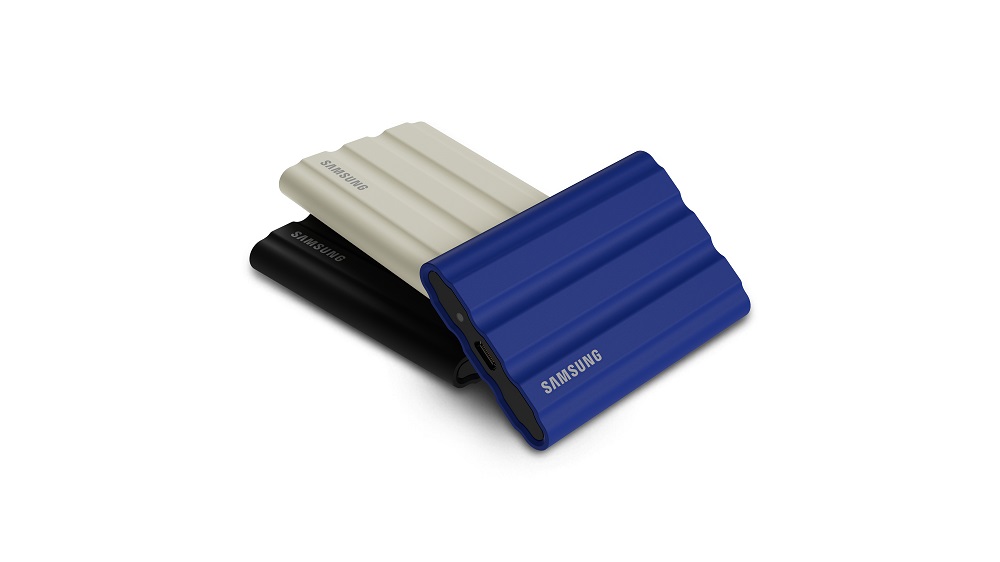 The main eye-catching feature of the T7 Shield is its robust and sophisticated design. In particular, the curves of the exterior and its detailed texture display a modern vibe, while the rubber surface makes holding the device feel more secure. Unlike other SSD products that are rough and hard to handle, the T7 Shield provides users with comfort and stability.

“Since SSDs are always used in connection with other devices, achieving harmony is important,” Jun said. “We tried to make the T7 series adaptable to any environment while maintaining the identity of the series. We tried to strike the right balance in order to make the unique charm of the T7 Shield stand out even more,” he explained. 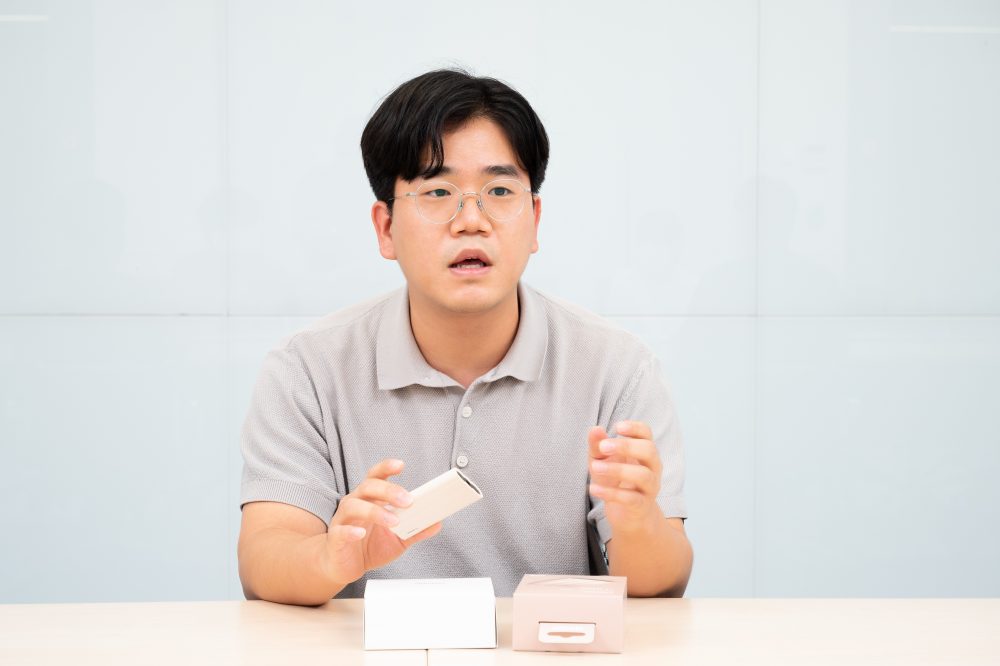 The T7 Shield comes in two sizes, 1TB and 2TB, and in three colors. “We offer the basic color black to represent the unique waterproof and dustproof qualities of the T7 Shield,” said Jun. “We also offer blue as it represents water, and we also offer beige, which represents soft sand. Users have these options to choose from according to their preference.” The product is also more eco-conscious. The amount of packaging materials used has been reduced by a third compared to those of the T5, the predecessor to the T7 Shield, and greenhouse gas emissions have been minimized during the manufacturing process.

When asked to describe the T7 Shield in one word, Lee chose “reliability.” He explained that the device is “reliable both in terms of convenience and durability, as it can be easily connected to other devices through its high performance and compatibility, and its shock-resistant design safely protects precious data.”

What kind of consumers is the T7 Shield best for? “It can be the best option for all kinds of consumers, including experts who often engage in outdoor activities, such as video producers and photographers, gamers who play the latest large-scale games, as well as consumers who deal with high-definition videos,” said Jung. “Personally, rather than singling out a certain consumer group, I’d like to strongly recommend the T7 Shield to all consumers who are very serious about data storage.” 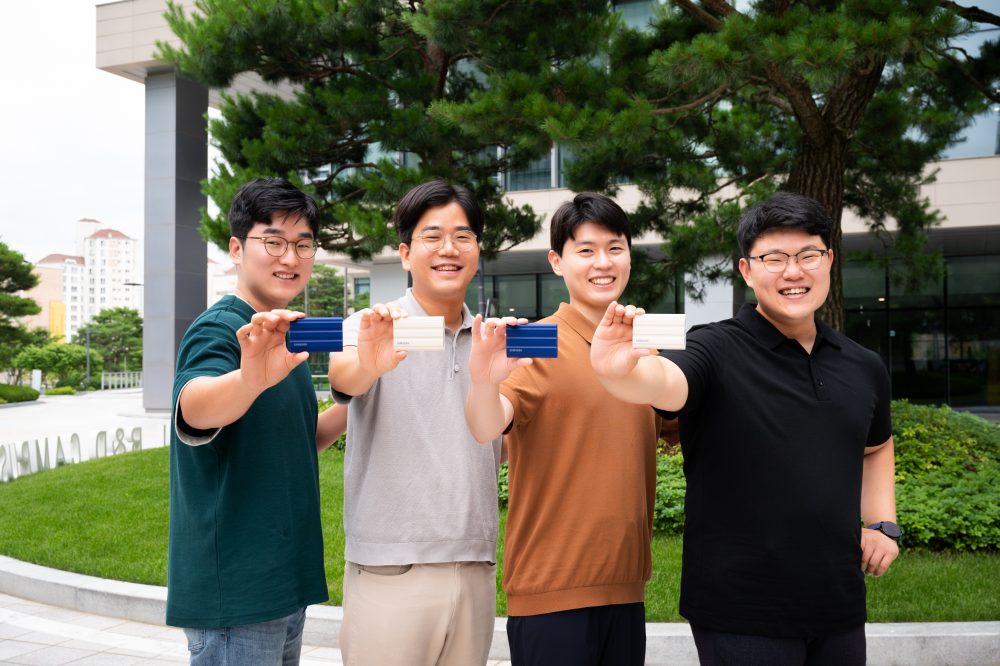 Safely storing data is the main function of portable SSDs, meaning the level of trust and confidence in the device among users is crucial. Samsung has built consumer confidence in its products in the global market and has led the portable SSD market. Stay tuned to see how Samsung continues to develop industry leading innovations going forward.