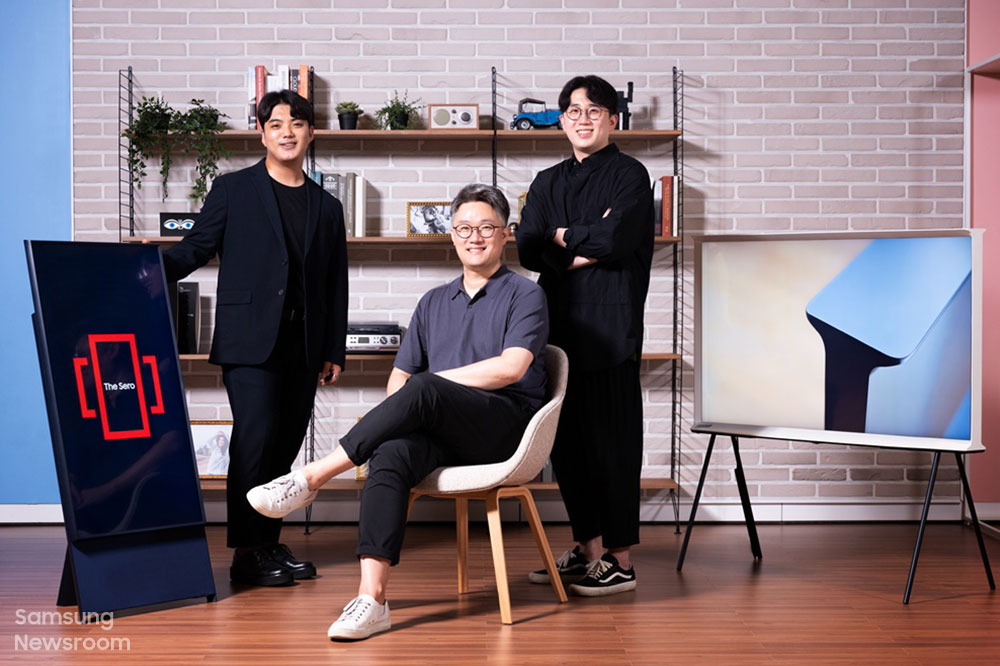 The characteristics of TVs are continuing to evolve in line with the latest trends and lifestyle patterns. Against this backdrop, the role of the television has expanded. Whereas it used to simply be a device for delivering entertainment, the TV has now become a central component of users’ interior design schemes.

To keep up with emerging trends, Samsung Electronics has continued to think outside the box as it explores new possibilities for TVs. Since 2015, the company has been continuously pushing the envelope to develop new looks and features on its televisions, and ensure that consumers can fit their TV to their lifestyle. So, how did Samsung come up with its lifestyle TV line, and what kind of consumer experience is it aiming to provide? To find out, Samsung Newsroom met with the company’s lifestyle TV product planners, who have contributed to solutions ranging from The Serif to The Terrace.

Lifestyle TVs: Becoming More Than Just a Fixture of the Living Room

Vivid picture and a sense of immersion are two fundamental elements that a television must provide, with a well designed product capable of delivering both. Nowadays, lifestyles are shifting, and viewing has moved out of the living room, with people preferring to consume their content in whichever room they are in at the time. 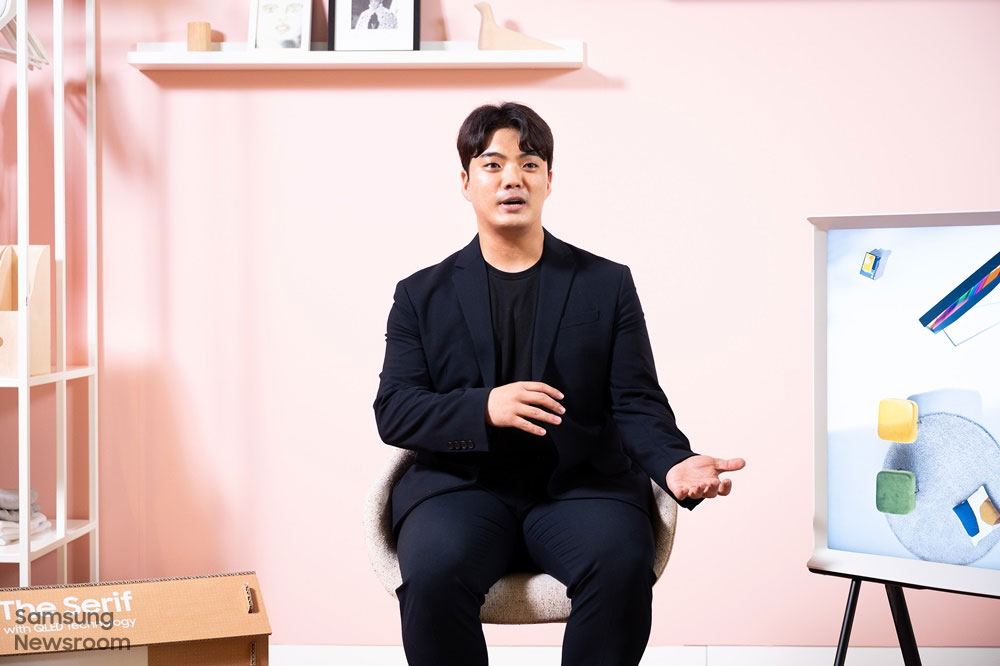 “Our goal was to allow consumers to have a range of different screens for the various spaces in their house,” said group leader Kang-il Chung. “This would allow them to enjoy whatever content they wanted, wherever they were, based on Samsung’s ‘Screens Everywhere’ philosophy.” Chung’s work involves analyzing tech trends and usage patterns, which allowed him to start determining which new features users want from their television.

“In order to establish concepts for new TV products and functions, we look at things like how televisions are being used, interior decoration trends and the overall cultural and lifestyle preferences of our users,” explained product planner Kyuseong Lee. During the planning stage, the product planners focus on connecting the desired user experience to the essence of the product. By doing this, the team seeks to make it easier for the user to comprehend both the product’s story and the distinct experience it offers. Added Lee, “Rather than simply adding lots of different functions, we work to clearly define the main concept of the product, then make it different. In this way, we look to realize all aspects of the core experience to perfection.”

The Serif and The Frame: Bringing Classy Décor to Your Other Rooms

Since the time of its invention, the television has been considered a staple of the living room. But now, with a growing number of users also putting TVs in rooms like their bedrooms and studies, this is changing. In line with this trend, Samsung has expanded what it deems the ‘TV space’ from the living room to a range of other rooms. Along with this, the company has started to develop televisions that not only suit the interior aesthetics of those other rooms, but include features that match the needs and lifestyles of the people using the rooms.

In September of 2015, Samsung introduced its first lifestyle TV, The Serif, which was designed to contribute to users’ interior design schemes. The Serif’s iconic I-shaped design was created by the internationally renowned Bouroullec Brothers, and is an ideal choice for those who want an aesthetically pleasing television that goes well in any space. “We pursued a meaningful design that emphasized people and space, and tried to get away from the usual ‘TV look’,” said Chung. “A lot of consumers claim that The Serif looks more like a lifestyle product than a TV.” 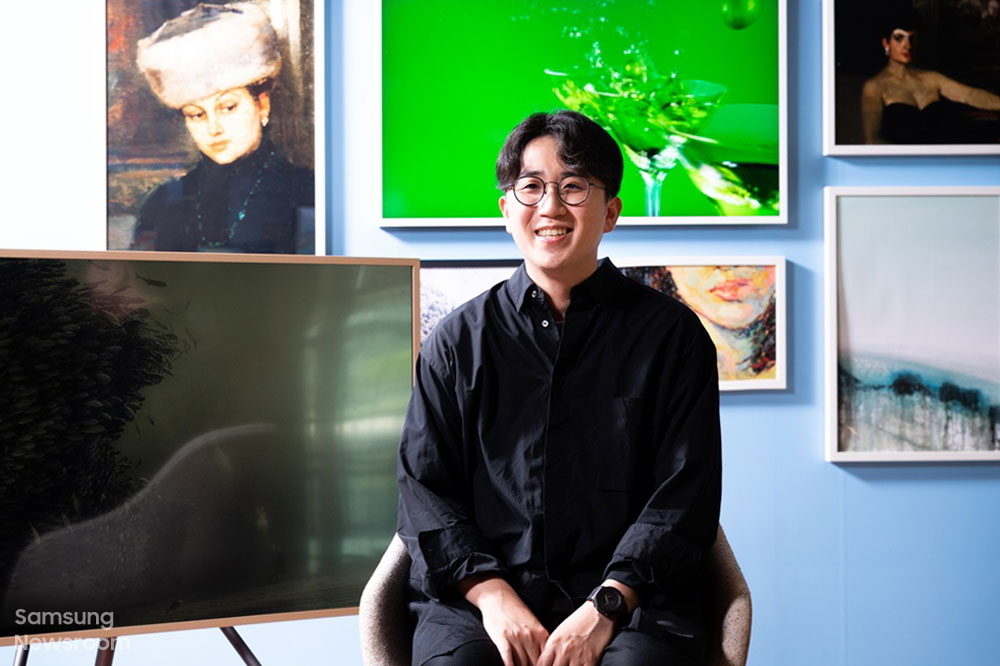 The product planning team’s ongoing efforts to develop new models that blend well with their surrounding environments also contributed to the development of The Frame. Looking like a modern picture frame, this television can be matched to any home décor style and features an ‘Art Mode’ that allows viewers to enjoy artistic masterpieces from the comfort of their homes. The TV’s sensors are also capable of automatically detecting illumination intensity and movement. “Samsung is collaborating with world-renowned curators, renowned art galleries, museums and artists to deliver a broad collection of art through the Art Store,” related Sunwoo Kim. “We will keep working hard to ensure that we are able to display an increasingly broad range of great artworks in stunning resolution.”

Thinking Outside the Box: The Sero for Millennials

And Samsung’s ‘think outside the box’ development philosophy goes beyond considerations of space and expands to form. Whereas a typical television has a horizontal, 16:9-aspect-ratio screen, modern viewers’ increasing use of mobile devices means that watching content on vertical screens is becoming more and more common. The Millennial generation’s tendency to watch things on their smartphones, in particular, has contributed to the increased prominence of vertically displayed content. Thus, The Sero was developed as an answer to the question, ‘what if we could make the TV screen rotatable so that it could better match the lifestyles of Millennial users?’ 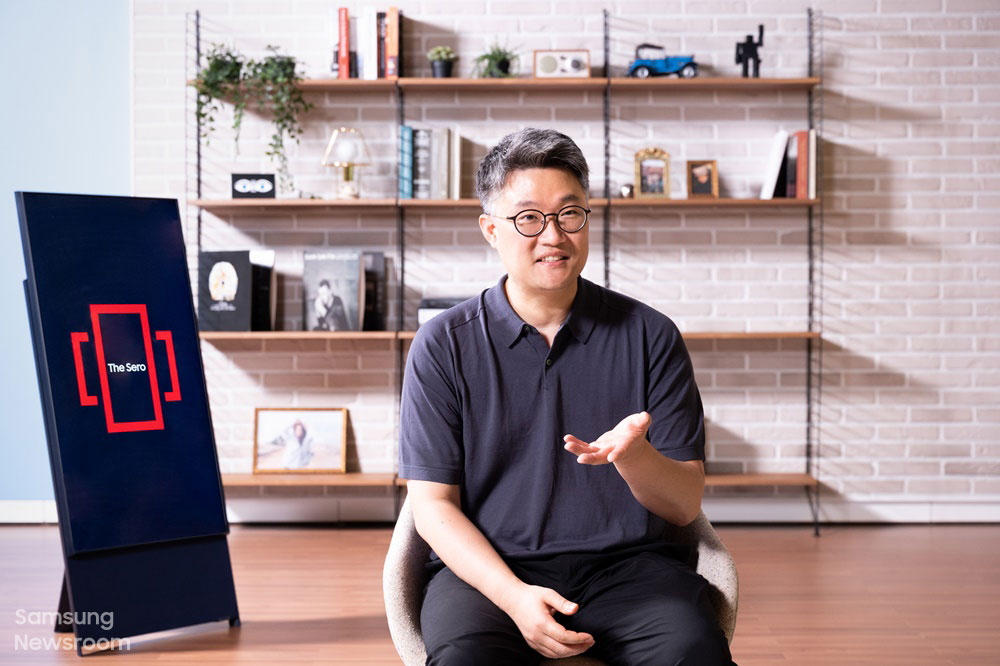 The Sero is the result of this bold idea. “Developing the Sero with a rotating screen was a long and challenging journey, as it was like we were exploring unchartered territory,” said the product planners. The team had to consider a broad range of factors, such as whether the user would rotate the screen manually or whether it would rotate automatically. The project brought many different teams together as they set out to create a whole new consumer experience, with their efforts eventually culminating in ‘The Sero’. “We are witnessing an increasing amount of consumption of vertical, short-form content on social networking sites,” remarked Chung. “And The Sero allows viewers to use screen mirroring to watch this content in a full screen, immersive format.”

Expanding to Other Spaces: The Premiere and The Terrace

Over time, the focus of Samsung’s Lifestyle TVs has shifted again. Due to the pandemic, many people prefer watching movies at home to going to the theater these days. The Premiere is specifically designed for those who want to create a theater-like environment in their homes. This easy-to-install model boasts a large, theater-like screen with very sharp picture quality. “With The Premiere, you can enjoy your favorite content on an ultra-large screen from the comfort of your home,” related Kim. “With a premium fabric finish, The Premiere also serves as an excellent complement to your interior décor.”

In the current climate, more people are also making use of private outdoor spaces such as balconies. In line with such consumer lifestyle changes, Samsung has introduced its first outdoor TV model, The Terrace. With superior water and dust resistance, The Terrace delivers an outstanding viewing experience regardless of rain, heat or other adverse weather events. Said Lee, “Going forward, the outdoor TV market is expected to grow exponentially. The Terrace provides an optimal outdoor viewing experience, delivering exceptionally vivid and detailed images in both the sunlight and the shade.” 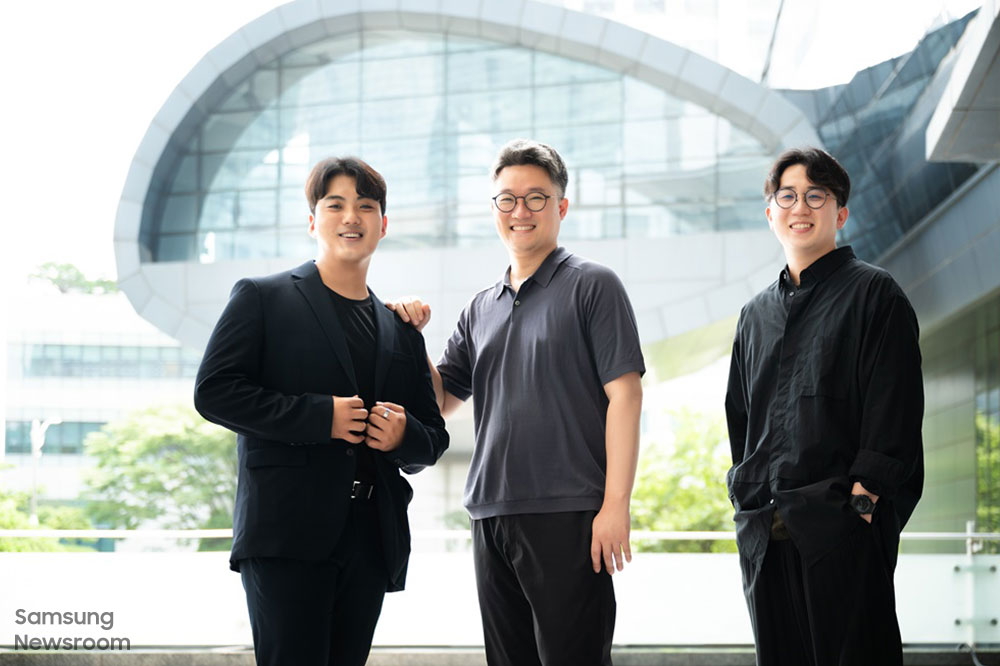 As our TVs become increasingly important parts of our lives, some argue that the evolution of the product is nearing its conclusion. But Chung thinks differently, claiming that, “There is still an unending range of possibilities for what our televisions might become in the future.” He expressed hope that himself and his team will be able to keep introducing new and varied lifestyle TV models to keep providing fresh experiences to consumers.

Samsung’s lifestyle TV product planners believe that TVs need to keep evolving in order to keep up with continuously changing lifestyles. “We want to develop TVs that people want to own, and that they’ll want to show off,” Kim stressed. “Our dream is to build a so-called ‘lifestyle universe’ where each space is equipped with a lifestyle TV that suits the function of the space.”