Kick might be an ultimate app for Fantasy Football League Players

Research suggests that football fans spend much more time engaging in content online than they do watching live games. Samsung wants to empower its consumers to become true football experts and this was the motivation behind our new app, Kick! With its simple and streamlined design, football enthusiasts have advanced information readily available at their fingertips. This is great news if you’re a fan of fantasy football; now you can pick your dream team with the stats to back up your choices.

Kick is the only app which combines in-depth football statistics and data with news and editorial all in one application. You can personalise the homepage to show leagues and teams that you care about the most. Kick is the ultimate football companion and is exclusively available on Samsung tablets and smartphones.

With several unique features, you’re bound to love this app and here’s why:

When you’re deciding on your fantasy team, you don’t need to have a lengthy debate anymore over who the best striker or defence is. Now you can set up a direct comparison on Kick.

This powerful feature allows you to compare any player or team against others that are competing in any of the supported leagues. In a simple head-to-head matchup displayed on a spider web chart, you can also compare seasonal stats against the league average. You can also share this visualisation with your social network, but be careful – you wouldn’t want everyone copying your fantasy football strategy!

The visually rich 3D Shot Map feature gives a snapshot of all goals and on-/off-target shots at any given time during a match. Remove any clutter from too many shots by disabling any shot type from the legend. As with the VS feature, you can also share this 3D shot map on your social media channels.

Want to see it all in one glance? Get a complete picture of what happened on the pitch in your league within a single screen. Kick shows you all the key events on a week-by-week basis, providing past match data and future fixtures. 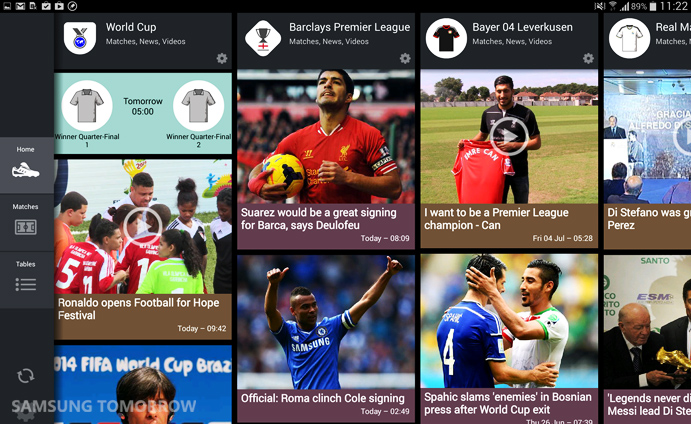 This might be the coolest part of the Kick. The app connects with your Smart TV to give you the ultimate football viewing experience.  The app overlays match stats and visualisations from your smartphone or tablet while you watch the game live on your Smart TV. This is convergence that only Samsung can offer.
Kick covers live scores, stats, news and editorial from World Cup 2014, Champions League, and the major European football leagues – English Premier League, Bundesliga, Ligue 1, La Liga and Serie A.

The app is available on a selection of Samsung smartphones, tablets and Smart TVs and is in the following languages: English, French, German, Italian and Spanish. Download it here if you live in Europe. Let your friends know about Kick to grant the power of football knowledge!