When you think of doodling, you probably think of mindless scribbles on a legal pad made during those long, afternoon meetings. But for Sam Cox, doodling isn’t for staving off boredom – it’s a dream come true. The 24-year-old British artist, known as Mr. Doodle, has earned a dedicated online following for his unique graffiti style doodles.

In 2015, he made a viral hit with Appear Hear’s pop-up store, which he transformed into a massive doodle art installation, garnering 36 million views. Since then he has created mrdoodle.com, where you can find information about his art and appearances as well as purchase prints and merchandise. But he’s not just an online sensation, he also draws a crowd at his offline events.

In one such event, Cox participated in a doodle marathon to raise money for sick children. He was also appointed the spokesperson for the Korea Foster Care Center in May 2018. His success has led to collaborations with brands like Macy’s, MTV, New Balance, and most recently, Samsung.

Cox opened the Doodle World exhibition this month at the Ara Art Center — his first in Korea — featuring artwork drawn with Samsung devices. For just a small fee, visitors can borrow a Galaxy S9+ to be their audio guide as they walk through a variety of doodle installations, including a wall with a screen made of 132 Galaxy Note 8s showing Mr. Doodle’s work created with the S Pen. In another S Pen gallery, guests can take selfies with the Galaxy Note8 and decorate it with Mr. Doodle’s artwork, which they can then send to themselves via email as a souvenir. Here are some highlights from the gallery. 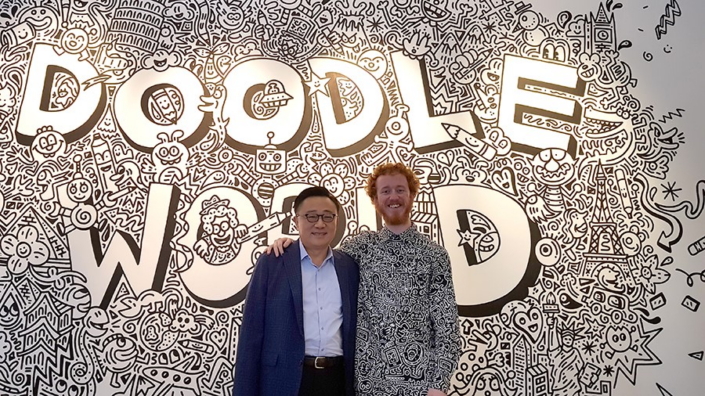 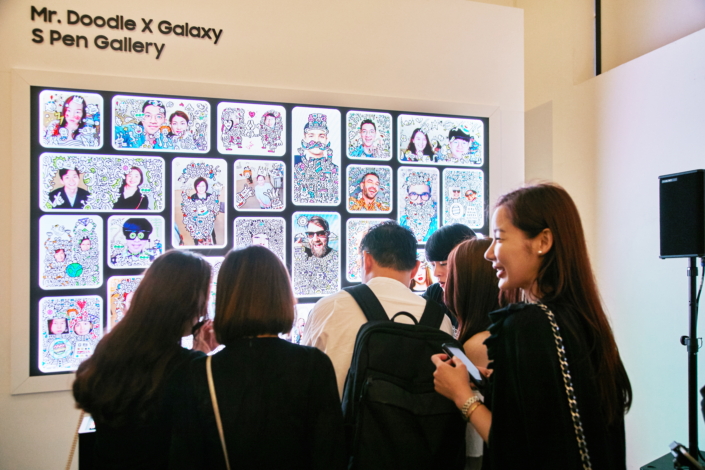 Guests take selfies in the S Pen gallery and decorate them with Mr. Doodle’s artwork. (Photo from Sinit) 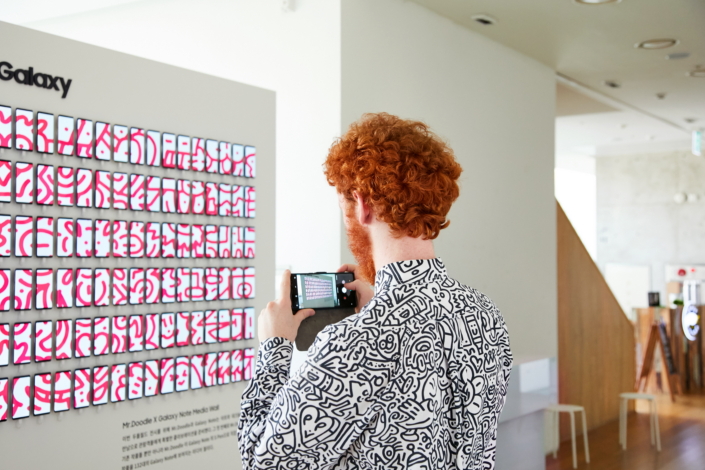 Mr. Doodle gets a quick snapshot of his handiwork on the media wall installation. (Photo from Sinit) 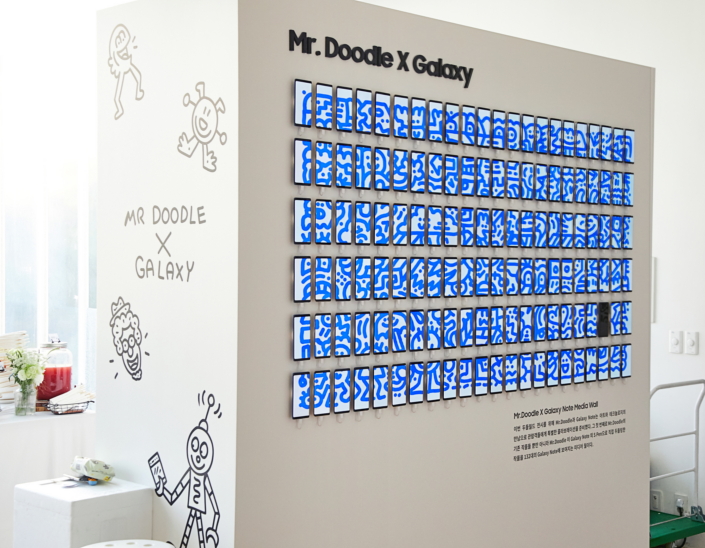 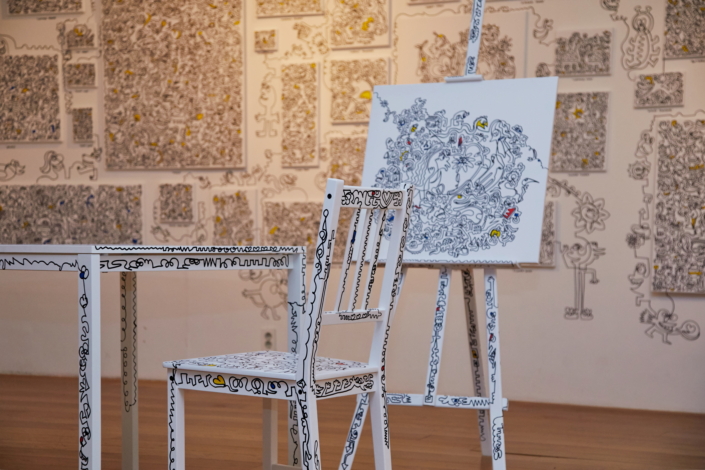 Doodles don’t stop on paper. Cox’s signature style is to cover every available surface in doodles. (Photo from Sinit) 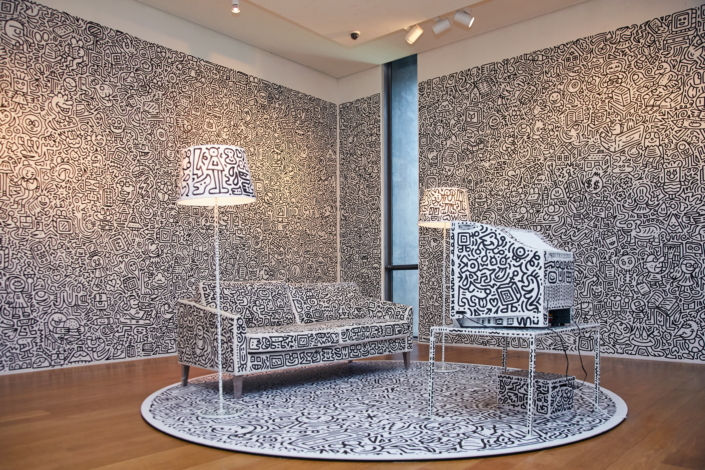 Yes, that means the walls, furniture, and even television get the Mr. Doodle treatment. (Photo from Sinit) 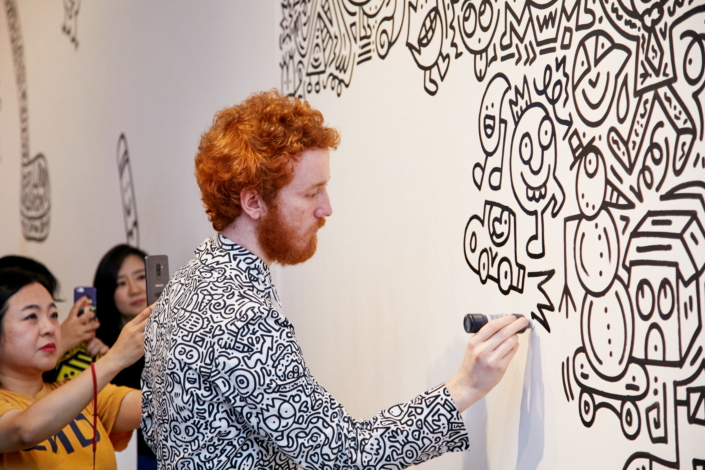 When you run out of clothing to draw on, the wall is the next best canvas! (Photo from Sinit) 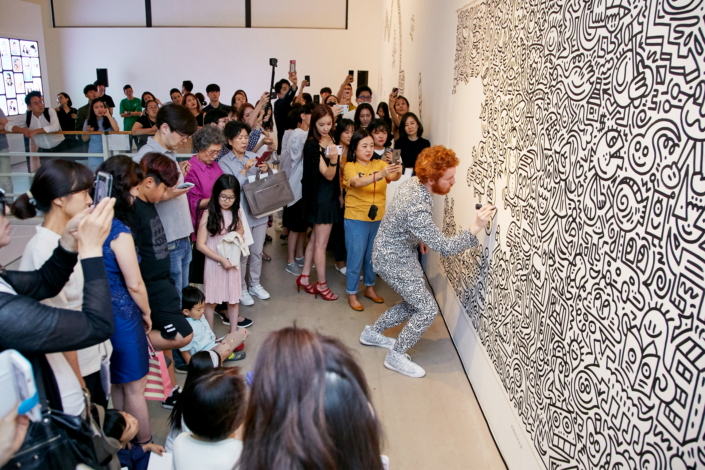 The crowd looks on as Mr. Doodle finishes a sprawling wall installation. (Photo from Sinit)

The Doodle World gallery runs from July 4 to September 9, and a portion of audio guide fees will be donated to the Korea Foster Care Center.