Samsung and Marvel Team Up to Create the Ultimate Fan Experience for Marvel’s Avengers: Age of Ultron

The entertainment industry is changing, and fast. Content consumption has shifted from analog to digital, and it’s clear that mobile users want access to content in never-before-seen ways that are more vivid, engaging and interactive than ever before. Because of this, Samsung and Marvel have been working closely together through a global partnership designed to connect two of the world’s most iconic multi-media entertainment brands. We’re giving our collective fan base the incredible power of Samsung’s Galaxy smart devices alongside Marvel’s unparalleled digital content.

This partnership goes beyond just the consumer experience, culminating in a series of stunning mobile devices designed especially for your favorite Marvel heroes. Harnessing the power of the Galaxy, Samsung has created a collection of Galaxy mobile devices that are featured in Marvel’s Avengers: Age of Ultron, ranging from the conceptual to Samsung products available on the market today. Watch closely and you’ll see the Avengers using a wide range of Samsung mobile devices, such as the striking Samsung Galaxy S6 edge and Galaxy NotePro. Conceptual Samsung technology used by the Avengers includes a futuristic Bluetooth headset and smartphone.

Fans can visit http://www.samsung.com/global/galaxy/ to learn more about Samsung’s line of mobile devices and Marvel’s Avengers: Age of Ultron, to be released in the US on May 1, 2015.

“Marvel is committed to bringing world-class content to our fans that will ultimately change the way consumers experience and enjoy their entertainment, said Mike Pasciullo, SVP Marketing, Marvel Studios & Television. “Samsung clearly shares our passion for creative storytelling and we are thrilled to be able to bring our comic books and movies to life through the breakthrough products from a global leader in mobile technology.” 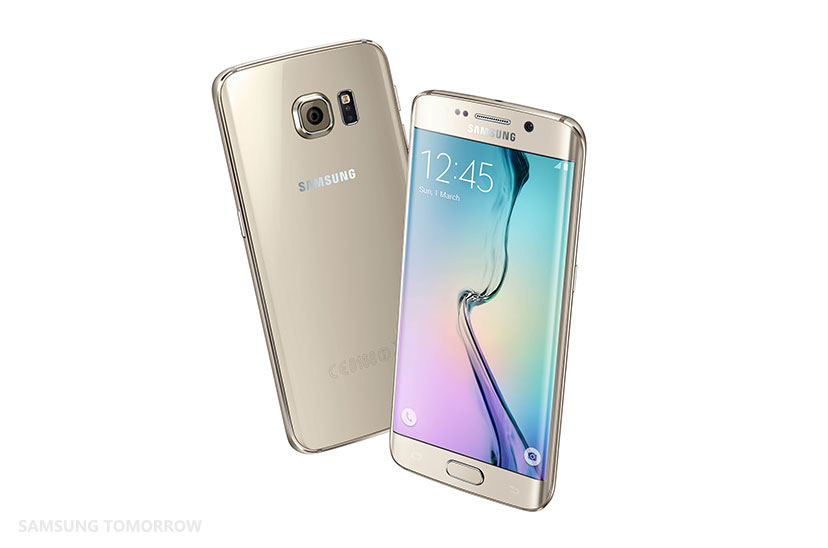 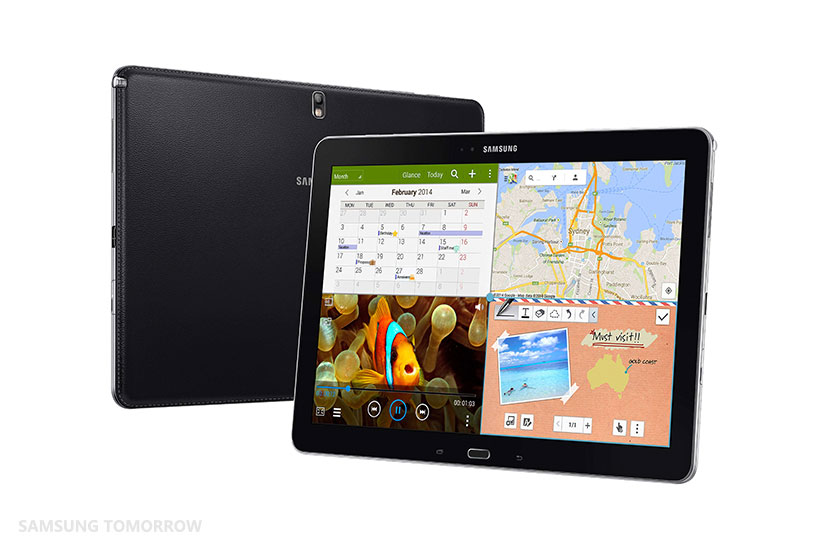 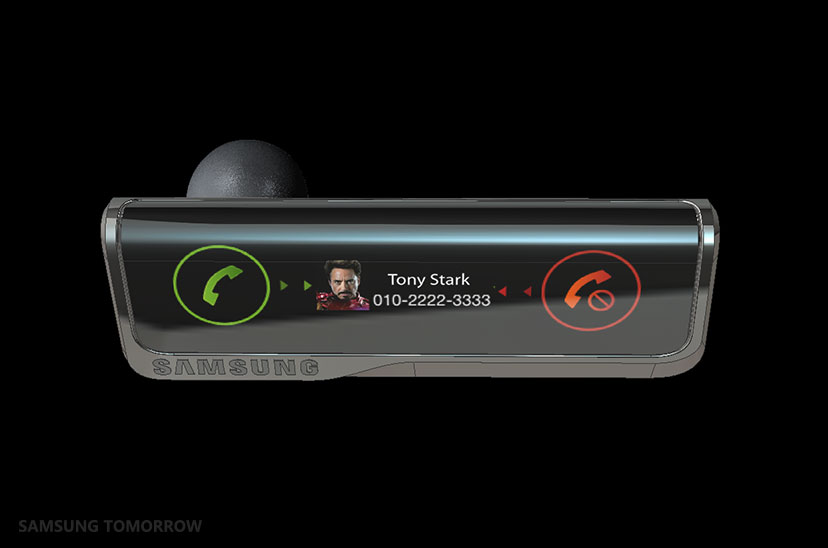 (Conceptual device) Bluetooth Earpiece: Protecting the world means that you need both hands free but you also need to communicate with your team. The Hero’s Bluetooth Earpiece is constructed for hands free efficiency with a metallic frame for combat ready durability, a curved screen, and simple touch controls. 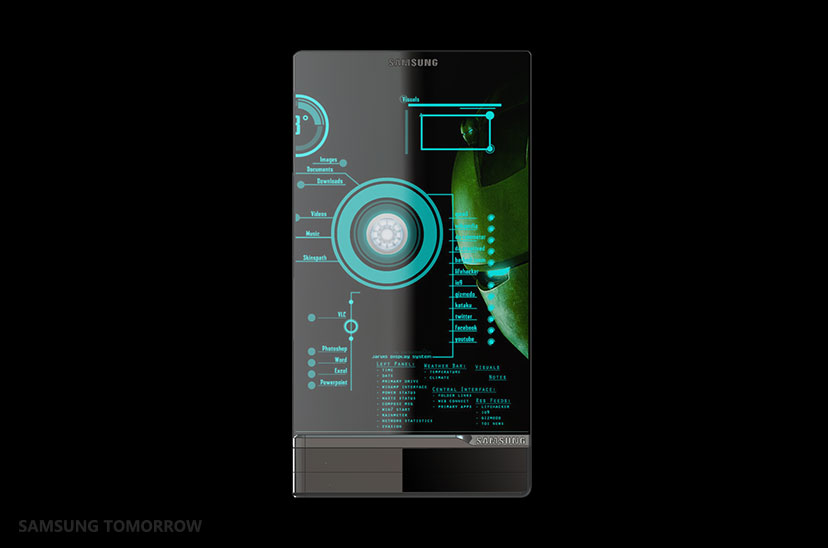 (Conceptual device) Smartphone: A sleek and metallic smartphone that features such cutting edge technology that Stark Industries is still trying to figure out how it was built. With a striking flexible display, the screen features two different curved panels, taking inspiration from Samsung’s Galaxy Note Edge so that important information is displayed separately from the main screen. The device also features a hologram glass user interface with finger print security via Accept Technology so that even if the devices gets into the wrong hands, Tony Stark’s personal data stays secure and out of the hands of the enemy.

About Marvel’s Avengers: Age of Ultron
Marvel Studios presents Avengers: Age of Ultron, the epic follow-up to the biggest Super Hero movie of all time. When Tony Stark tries to jumpstart a dormant peacekeeping program, things go awry and Earth’s Mightiest Heroes, including Iron Man, Captain America, Thor, The Incredible Hulk, Black Widow and Hawkeye, are put to the ultimate test as the fate of the planet hangs in the balance. As the villainous Ultron emerges, it is up to The Avengers to stop him from enacting his terrible plans, and soon uneasy alliances and unexpected action pave the way for an epic and unique global adventure.

Marvel’s “Avengers: Age of Ultron” stars Robert Downey Jr., who returns as Iron Man, along with Chris Hemsworth as Thor, Mark Ruffalo as Hulk and Chris Evans as Captain America.  Together with Scarlett Johansson as Black Widow and Jeremy Renner as Hawkeye, and with the additional support of Don Cheadle as James Rhodes/War Machine, Cobie Smulders as Agent Maria Hill, Stellan Skarsgård as Erik Selvig and Samuel L. Jackson as Nick Fury, the team must reassemble to defeat James Spader as Ultron, a terrifying technological villain hell-bent on human extinction. Along the way, they confront two mysterious and powerful newcomers, Pietro Maximoff, played by Aaron Taylor-Johnson, and Wanda Maximoff, played by Elizabeth Olsen and meet an old friend in a new form when Paul Bettany becomes Vision.

Written and directed by Joss Whedon and produced by Kevin Feige, p.g.a., Marvel’s Avengers: Age of Ultron is based on the ever-popular Marvel comic book series “The Avengers,” first published in 1963. Louis D’Esposito, Alan Fine, Victoria Alonso, Jeremy Latcham, Patricia Whitcher, Stan Lee and Jon Favreau serve as executive producers. Get set for an action-packed thrill ride when The Avengers return in Marvel’s Avengers: Age of Ultron on May 1, 2015.

About Marvel Entertainment
Marvel Entertainment, LLC, a wholly-owned subsidiary of The Walt Disney Company, is one of the world’s most prominent character-based entertainment companies, built on a proven library of more than 8,000 characters featured in a variety of media over seventy years.  Marvel utilizes its character franchises in entertainment, licensing and publishing.  For more information visit marvel.com.  © 2015 MARVEL