Plaza Norte, one of the iconic shopping malls in Lima, the capital of Peru, is now home to South America’s largest digital out-of-home (DOOH) LED signage created by Samsung Electronics. The two hundred thousand square meter shopping mall houses major shops and brands. Now the shoppers and visitors can also gather at the square in front of the mall to indulge in watching a major sports game or an exciting cultural event on the mega-sized screen.

The signage at Lima’s Plaza Norte is the latest example of Samsung’s recent LED signage endeavors, following the installation of South Korea’s largest curved SMART LED signage outside of COEX convention center in one of the most bustling areas of Seoul.

Samsung, the No.1 Leader in Global Signage Market

Samsung has held the number one market share of 24.9%1 in the global signage market for nine consecutive years and will likely continue its position as a world leader for the tenth year according to 2018 1Q data released by IHS Markit. The company has continuously developed innovative signage products such as ultra-large-sized LED Signage and The Wall Professional. Back in 2009, Samsung opened up the video wall signage market by introducing the thinnest 7.3mm bezel video wall ever; and in 2015, the company acquired the North American LED commercial display company YESCO Electronics to strengthen its B2B display business.2 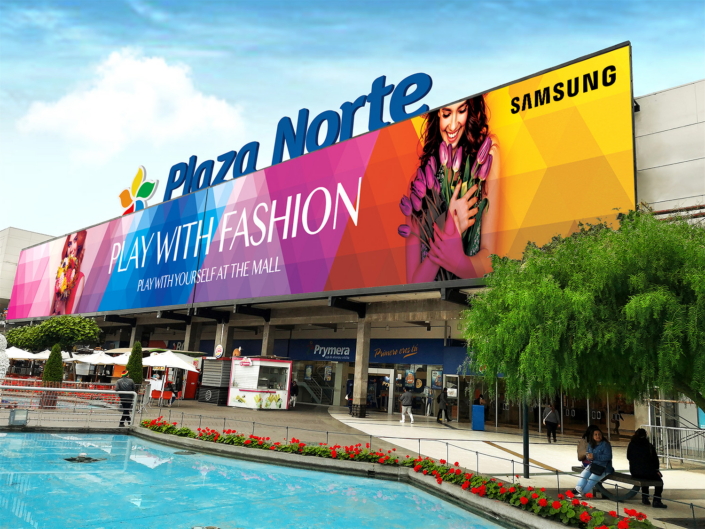 This year, Samsung Electronics is leading the market by focusing on large-sized LED signages, as showcased by record-breaking sizes of LED signages in Korea and Peru. Aside from the newest addition in Lima, Peru, Samsung also installed the longest ribbon-type advanced LED signage in New Zealand’s national stadium Eden Park as part of its official partnership with the Stadium. The curved LED signage outside of AFAS Circustheater, one of the most prominent theaters in the Netherlands, is another case where Samsung installed a large-sized LED signage custom-designed to meet unique needs.

To build the largest DOOH LED signage in South America, Samsung’s Enterprise Business Team collaborated with Plaza Norte’s marketing team for many months to launch the LED screen located on the outside of the Plaza Norte building. Building upon the previous experiences in the field, Samsung’s engineers decided that the ideal LED screen product for the mall would be the XA160F outdoor, which consists of 528 cabinets and has an area of 487 square meters. 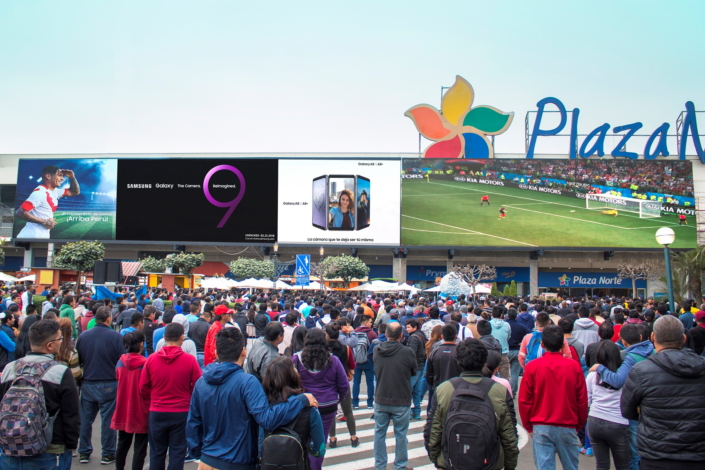 The Samsung XA160F SMART LED Signage outdoor display features a 16.0mm pixel pitch for enhanced resolution. The screen also comes with IP65 standards that ensure the screen holds up under all types of weather conditions, and the panels have an anti-UV treatment that prevents deformation and discoloration due to sun exposure. In terms of performance, its design and brightness level deter the interference of light, maintaining levels of 7,700 nits at all times.

As it’s the largest DOOH LED signage in South America, the 487 square-meter screen marks a milestone for Samsung. The company will now strive for even higher goals in product innovation and project development regarding its professional display business.

2 YESCO Electronics, a LED display manufacturing company based in Utah, US, was rebranded as Prismview in March 2016.