With a focus on craftsmanship, clever connectivity and championing the impossible across its new products and services, Samsung sets out to shape life’s “new normal”

Samsung Electronics today used its presence at IFA 2017 in Berlin to showcase its latest consumer products and innovative technology that are helping make the impossible tomorrow’s ‘new normal’. During its press conference, held at Tempodrom in Berlin, Samsung highlighted its focus on the craftsmanship and connectivity of its products, along with partnerships that are enabling its technology to rapidly set new standards. 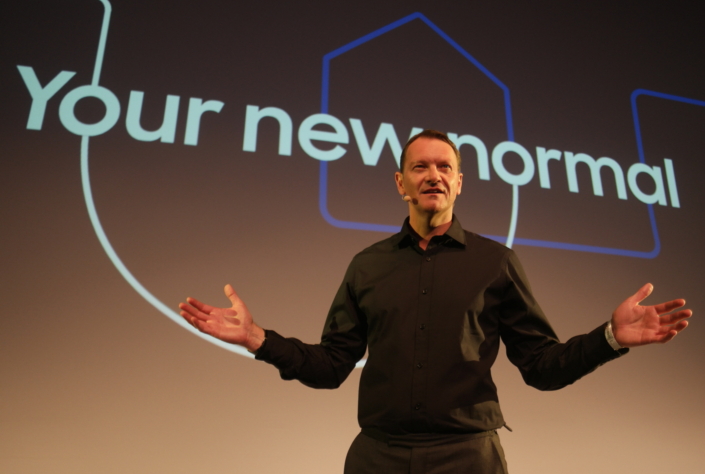 “Samsung’s innovation is inspired by consumers and designed to make an immediate difference,” said David Lowes, Chief Marketing Officer for Samsung Electronics Europe. “This innovation is based on craftsmanship, clever connectivity and championing the impossible. As technology increasingly plays a role in every part of our lives, we’re creating products and services that adapt to consumers and set the tone for what becomes their ‘new normal’.”

Samsung continued to revolutionise the visual display industry at IFA 2017, with the release of a new 43-inch version of The Frame that was first unveiled earlier this year. Previously available in 55- and 65-inch sizes, the design-led TV experience is the ideal fit for the living room or other sized rooms in the home.

Samsung has partnered with leading galleries and museums such as the LUMAS, Saatchi Art, and Sedition to further enhance The Frame as an art-centric device within the home. Samsung also announced a new partnership with the Prado museum, as well as plans to acquire approximately 1,000 prominent art pieces that can be enjoyed in The Frame’s Art Store in near future. Users will be able to choose from an expanded selection of art, making the most of their TV even when it isn’t in operation.

In addition to the Art Store, the Samsung Collection of specially curated art pieces and the My Collection feature, which allows consumers to project their own personal images onto the screen, gives consumers even more options to visually customize their space, wherever they choose to place The Frame within the home.

Along with The Frame, Samsung presented plans to expand the QLED TV line-up to Europe, as it continues to grow its leadership within the premium TV market. The Q8F model, a flat version of the curved Q8C model, will be launched in Europe in 55 and 65-inch sizes. This model will be a part of the largest TV line up in Europe, which consists of 14 full QLED TVs, in curved and flat models, ranging from 49-inch to an ultra-large 88-inch.To further amplify its premium line of QLED TVs, Samsung has also entered into a partnership with Panasonic and 20th Century Fox to proliferate HDR 10+ technology. In the months to come, Samsung will continue to expand partnerships to include Hollywood studios, content providers, and game developers.

Samsung also introduced the world’s largest QLED gaming monitor – the CHG90, which measures 49-inches, with a 178-degree ultra-wide viewing angle. The CHG90 offers a full and immersive view of gaming action, expanding the visual capabilities of a gaming monitor without sacrificing speed.

The Craftsmanship for Meaningful Innovation in Appliances

Samsung’s new home appliances introduced at IFA 2017 are designed with a single aim in mind: to make a meaningful difference in people’s lives with brilliant innovations they come to rely on. 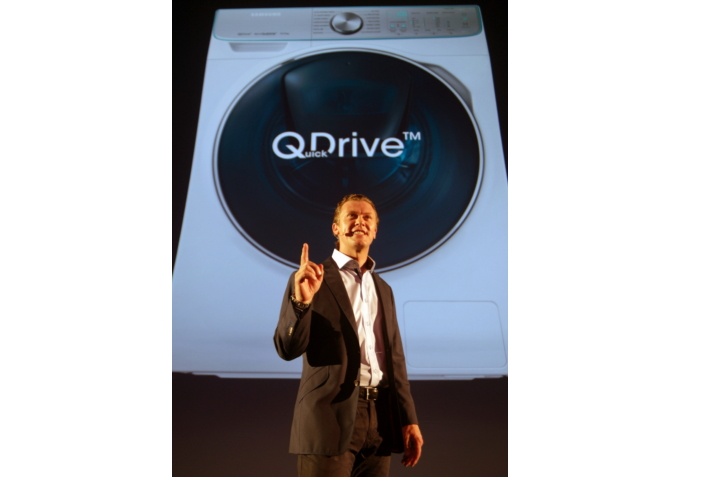 For example, the need to design around real-life problems was displayed with the launch of Samsung’s new washing machine with QuickDrive™ technology. Samsung’s QuickDrive™ technology cuts washing time by half and energy use by 20 percent*, offering consumers the time-saving solution, without compromising washing performance. Its unique Q-DrumTM consists of a large main drum and a plate in the back that rotates independently. Unlike conventional washers that move clothes repeatedly up and down over the course of the cycle, the QuickDrive™ moves clothes from top to bottom in the drum but with an added dimension. The plate in the back of the drum introduces a back and forth movement, making a dynamic action powered by double forces that quickly and gently remove dirt to deliver an intense and complete wash cycle.

Samsung introduced the innovative concept called AddWashTM at IFA in 2015, which allows users to add clothes to a washing machine during an active cycle. QuickDrive™ takes innovation one step further by offering a new level of convenience and performance. This is the type of technology that Samsung says will eventually become the “new normal” – technology we soon will be unable to live without.

In line with the key theme of Craftsmanship, Samsung also revealed the POWERstick PROTM cordless vacuum cleaner. Providing the ultimate cleaning solution, the POWERstick PROTM guarantees powerful cleaning performance, easy maintenance and a long-lasting battery. It features an industry-leading 150 watts of suction power and 40-minutes of battery time—twice as long as traditional batteries—with a battery lifespan of five years. It also boasts Flex Handle that folds up to 50 degrees, letting users clean hard-to-reach spaces, such as the below furniture, with less effort.

Samsung will also expand the voice capability of its Family Hub refrigerator to countries in Europe on a phased basis this year, starting with British English, German, French, and Italian. Family Hub will also be integrated with Samsung Connect, letting users control a wide variety of IoT-ready smart appliances regardless of their operating system.

Cleverly Connected for Life on the Move 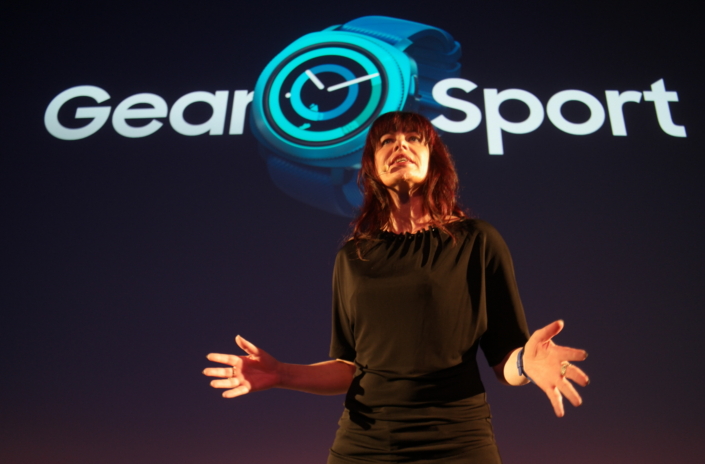 The versatile smartwatch, the Gear Sport, takes on board the functionality that users want from a fitness gadget today. It is packed with features for people who see no boundary between their life and their wellness. It includes built-in GPS, run-pacing features and nutrition tracking.

With a focus on connectivity, the ever-growing connected ecosystem also brings about the need for more control. The Gear Sport can control the Samsung IoT-enabled devices, act as a remote control for a PowerPoint presentation or Samsung Gear VR, and pay for goods via Samsung Pay (NFC Only).

Samsung also launched the Gear Fit2 Pro – an advanced GPS fitness band. It features a curved 1.5” Super AMOLED display and is able to track various activities – whether on land or in the pool. For the new swimming capabilities, Samsung partnered with swimming expert Speedo to create Speedo On, the first Speedo wearable app that accurately tracks pool exercises. Everything from measuring the number of strokes or lap times, to tracking which stroke the user is doing is all possible on the 5ATM certified** Gear Sport and Gear Fit2 Pro with the Speedo app.

Daily activity can be supplemented with updated Under Armour and Spotify partnerships. Both devices provide access to Under Armour’s fitness apps including Under Armour Record™, MyFitnessPal®, MapMyRun® and Endomondo™ for activity, nutrition, sleep and fitness tracking functions – these apps provide users with a holistic picture of their health and fitness. The Gear IconX (2018) cord-free earbuds complete the line-up of wearable devices launched by Samsung at IFA 2017.

Leading the Standardization of IoT Technologies; Convergence with HARMAN

Samsung has been leading the standardization of global IoT technologies as a diamond member of the Open Connectivity Foundation (OCF). Samsung is the first in the industry to receive the OCF certification for its smart TVs, Family Hub refrigerators and air conditioners, and intends to expand the certification to all of its home appliances throughout the year.

The OCF certification will allow for open compatibility between the different products of member companies. In addition to Samsung, more than 390 companies have joined the OCF, with 20 billion IoT products to be synchronized with the OCF standard in three years.

Samsung’s ongoing partnership with HARMAN is also fortifying its big picture for the new normal. Following six months of partnership, Samsung is now the global leader in connected car technology, with more than 50 million cars on the road worldwide powered by HARMAN and Samsung technology.

The partnership is focused on creating audio and visual experiences that just a short while ago, would have been considered impossible. For example, Samsung’s new HDR LED screen for cinemas, measuring more than 10 meters or 34 feet across, delivers unrivalled picture quality and is brought to life by the audio technology of HARMAN Professional Solutions, together with Samsung AudioLab. The powerful combination of Samsung and HARMAN aims to reinvent both mobility and entertainment, taking the new and making it normal.

Samsung Electronics’ booth will be open at Level 2, City Cube Berlin from September 1 through 6 for IFA 2017.

**Gear Sport and Gear Fit2 Pro have ISO 22810:2010 certification for 5 ATM rating of 50 meters (165 feet) under specific conditions. This means that both devices are safe to wear while walking in the rain or showering, and may be used for shallow-water activities like swimming in a pool or ocean. However, the Gear Sport and Gear Fit2 Pro should not be used for scuba diving, waterskiing, or other activities involving high-velocity water or submersion below shallow depth.