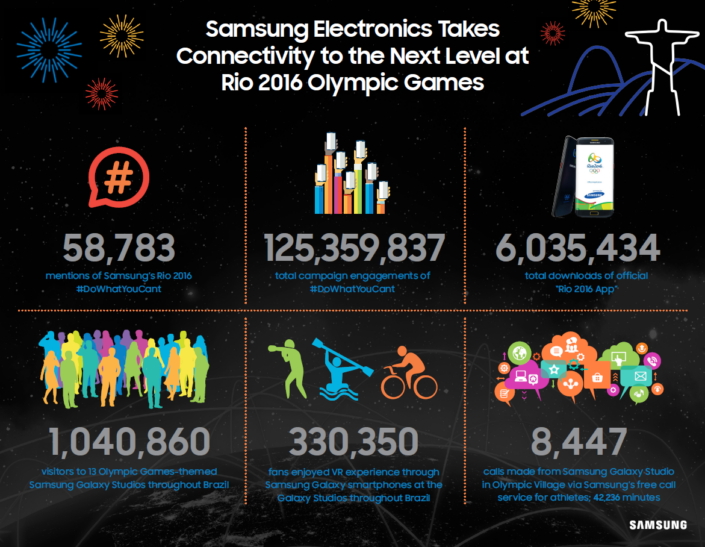 Samsung Electronics, Worldwide Olympic Partner in the Wireless Communications Equipment category, saw connectivity and digital interactions taken to the next level for athletes and fans during Rio 2016 Olympic Games. With Samsung Galaxy Studios spread throughout the Olympic Games footprint and beyond in Brazil, athletes and fans were able to demo the most advanced mobile technologies and stay connected with friends and family back home. Samsung today announced numerous metrics that proved Rio 2016 was one of the most connected Olympic Games in history.

Standing out was Samsung’s #DoWhatYouCant campaign, which achieved more than 1.6 billion social impressions and engaged almost 121 million fans. Based on the philosophy that the Olympic Games has never only been about sports, #DoWhatYouCant celebrates those who defy barriers to do the extraordinary, inside and outside of sports. Through its heralded documentary “A Fighting Chance,” along with advertisements and content like “The Chant” and “The Anthem,” the campaign tells the stories of those who push the limits to overcome obstacles, helping fans across the globe connect with what it means to “Do What You Can’t.”

Samsung reached many other milestones at Rio 2016, helping the brand achieve top marks. By the numbers, Samsung’s milestones included:

Samsung’s free call service at its Galaxy Studio in the Olympic Village proved to be a hit for athletes, helping them connect with their families back home as they prepared for competition. VR experiences were also immensely popular for both athletes and fans – with many of Samsung’s 13 Olympic Games-themed Galaxy Studios throughout Brazil offering SporTV’s VR livestream of events for thousands of fans.

To help make this Olympic Games more connected than ever, Samsung – in collaboration with the International Olympic Committee (IOC) – presented 12,500 Galaxy S7 edge Olympic Games Limited Edition mobile phones to athletes competing in the Rio 2016 Olympic Games. The commemorative smartphones were meant to help Olympians enhance their experiences in Rio and communicate with friends and family around the world more conveniently.

And with the help of the Rio 2016 Organizing Committee, Samsung also developed the official application of Rio 2016, “The Rio 2016 App,” that provides athletes, fans and consumers 24/7 updates on all of the latest Olympic Games news. And to have a home base for all of the digital interactions at the Olympic Games, Samsung last week opened its main Samsung Galaxy Studio Olympic Park right in the heart of the Rio 2016 Olympic Games, where fans and consumers can demo Samsung’s latest wireless communications products and immersive technologies.

“As a continuous contribution to the Olympic Games, Samsung creates immersive programs that unite the world through our mobile technology helping fans across the globe have access and enjoy,” said Younghee Lee, Executive Vice President of Global Marketing, Mobile Communications Business at Samsung Electronics. “Rio 2016 has proven to be a digitally connected Olympic Games. We are delighted to see the great connections of the athletes and fans, which we look forward to continuing into the PyeongChang 2018 Olympic Winter Games.”

For more information about Samsung’s involvement in the Olympic Games, please visit www.samsungmobilepress.com/Olympics/