Samsung Electronics to Donate Over $500,000 to Fisher House Foundation in Support of Military Service Members and Veterans

Samsung Electronics announced the establishment of a two-year, half million dollar financial and technology partnership with Fisher House Foundation. The Fisher House’s program just celebrated its 25th year of service, providing “homes away from home” to the families of service members and veterans who are receiving treatment at military or VA medical centers. The announcement comes just one month after Samsung’s one million dollar donation to the Korean War Veterans Memorial Foundation’s Maintenance Fund in Washington, D.C. The $500,000 commitment to Fisher House Foundation is comprised of corporate funding for the role of Principal Construction Donor for four (4) new home builds, product donations for new and existing Fisher Houses, and volunteer engagement from Samsung employees nationwide.

“It is an honor to tangibly demonstrate our gratitude to American service members, veterans, and their families for their sacrifice in defending Korean democracy, as well as the freedom and way of life enjoyed by our American employees, partners and customers,” said Won-Kyong Kim, Executive Vice President, Samsung Electronics, and Head of Samsung’s U.S. Public Affairs office. “Through this investment, Samsung remembers your sacrifice.”

As part of its partnership with Fisher House Foundation, Samsung will provide corporate funding to engage in the role of Principal Construction Donor for four (4) new Fisher Houses being built in 2016 and 2017 in Palo Alto, CA, Ft. Hood, TX, Omaha, NE, and one additional location to be announced. In addition, the overall donation will include refurbishing and outfitting older houses (among 60+ total) with brand new, state-of-the-art Samsung kitchen and washing appliances, televisions, tablets and other personal electronics. Samsung will also help curate a suite of apps for use on the Samsung devices that will equip families to more effectively communicate back home to loved ones, neighbors, employers, and teachers, as well as to assist in the management of medical care, finances, and education.

“Fisher House Foundation is eager and excited to work with Samsung,” said Ken Fisher, Chairman and CEO of Fisher House Foundation. “Our military men and women should know we have their backs. That the nation is there for them. That their sacrifice will never be ignored. Samsung’s efforts go a long way to achieving those goals.”

To further encourage the company-wide investment in this new partnership, Samsung employees will have annual volunteer opportunities to work with Fisher Houses in key U.S. locations where Samsung has a core footprint, including Palo Alto, CA; Washington, DC; Minneapolis, MN; and, Austin and Dallas, TX. Employees will be able to volunteer at specific Fisher House sites, including Samsung’s National Days of Service, cooking dinners at houses, fulfilling a House Wish List on Amazon Smile, donating air miles and hotel points to Fisher House Foundation’s Hero Miles and Hotels for Heroes programs, and participating in Giving Tuesday.

Above and beyond its umbrella $500,000 sponsorship, Samsung is also pleased to contribute $100,000 to Fisher House Foundation that will be specifically dedicated to its affiliated partner, the National Military Family Association, for a special Samsung-funded scholarship fund in support of military spouses. These scholarships will specifically support New Jersey-based spouses who serve alongside service members, providing essential funds needed to continue their higher education goals, including for STEM-focused academic programs. 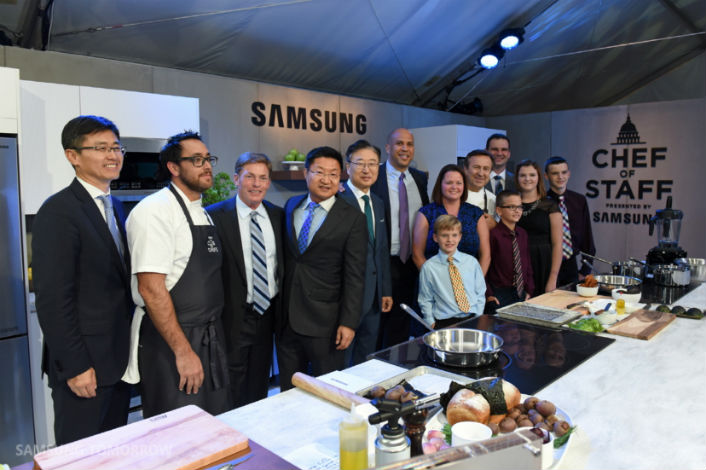 “Samsung shares our belief that caring for these families is the right thing to do,” said Ken Fisher. “Through their generosity we’ll be able to better care for our veterans, service members, and their beloved families for years to come.”

BK Yoon, President and CEO at Samsung Electronics, commented: “As we embark on this two-year partnership with the Fisher House Foundation, we celebrate the opportunity to help unite our military heroes with their loved ones, and bring them together through the power of food. Our products, such as the Chef Collection line, not only bring industry-leading performance and reliability, but ultimately aim to bring families and communities closer together by enabling people to maximize their experiences through technology.”

Preceding the cooking show, Senator Cory Booker (D-NJ), Senator Deb Fischer (R-NE), Chairman Michael T. McCaul (R-TX), and Congresswoman Anna Eshoo (D-CA-18) each provided remarks on how they have, and will continue to engage with Samsung through the company’s cash and in-kind product donations for existing and new Fisher Houses based in their respective states and districts. Additionally, the 200 guests – drawn from the public, private, government and non-profit sector communities – heard special remarks from Mr. Ken Fisher, Chairman and CEO of Fisher House Foundation, Inc., as well as New Jersey-based military spouses who were the first to be matched to Samsung’s higher education scholarship fund coordinated through the National Military Family Association.

Samsung Electronics, with its growing footprint of 17,000 U.S. employees is making the support of veterans and military family initiatives a major part of its social responsibility and citizenship efforts in the United States. Several of its efforts – such as Samsung’s 20 year partnership with the American Legion to provide college scholarships to descendants of American Korean War Veterans, and its support for the Korean War Veterans Memorial Foundation – are rooted in the company’s recognition of the importance of the U.S. military role in South Korea’s history.

Fisher House Foundation is best known for a network of comfort homes where military and veterans’ families can stay at no cost while a loved one is receiving treatment. These homes are located at major military and VA medical centers nationwide, and in Europe, close to the medical center or hospital it serves. Fisher Houses have up to 21 suites, with private bedrooms and baths. Families share a common kitchen, laundry facilities, a warm dining room and an inviting living room. Fisher House Foundation ensures that there is never a lodging fee. Since inception, the program has saved military and veterans’ families an estimated $282 million in out of pocket costs for lodging and transportation. Fisher House Foundation also operates the Hero Miles Program, using donated frequent flyer miles to bring family members to the bedside of injured service members as well as the Hotels for Heroes program using donated hotel points to allow family members to stay at hotels near medical centers without charge. The Foundation also manages a grant program that supports other military charities and scholarship funds for military children, spouses and children of fallen and disabled veterans. To learn more about Fisher House Foundation, visit www.fisherhouse.org.