Samsung Electronics today announced that it was named “Device Manufacturer of the Year” by GSMA, an organization that represents the interests of the worldwide mobile communications industry and hosts the Mobile World Congress trade show in Barcelona. This honor came in recognition of Samsung’s innovation in the mobile handset space, responsiveness to consumer tastes and preferences, and best-in-class products with quality at their core. 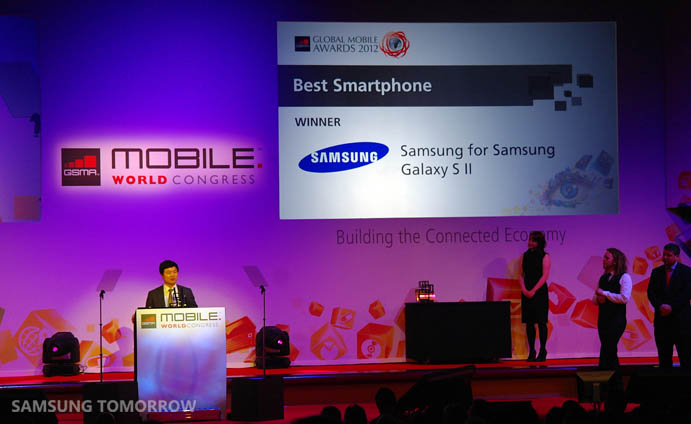 Samsung’s Mobile Communications Business offers the world’s widest range of mobile phones, tablets, multimedia players, and mobile related products and solutions from cutting-edge smart mobile devices to mass-market smartphones that have been successful in emerging markets. With a various product line-up that supports all major operating systems, Samsung gives consumers the choice to define their own mobile experience.

Highlights from 2011 include the launch of Samsung’s highly successful Android-powered GALAXY S II, GALAXY Note which introduced a new device category, and GALAXY Tab 10.1, one of the thinnest tablet devices in the world. Each of these devices has strengthened Samsung’s commitment to democratizing the smart mobile device era and bringing cutting-edge smartphone experiences to the mass-market.

Samsung Electronics also announced that GALAXY S II was named “Best Smartphone” by GSMA. This honor comes in recognition of the device’s powerful performance and overwhelming response from consumers. GALAXY S II, Samsung’s flagship smartphone, achieved worldwide sales of over 10 million units in only 5 months, quicker than any device in Samsung’s history and surpassed over 20 million sales in 10 months.