• The 1TB mSATA SSD’s thickness and weight are approximately 40 percent and a twelfth of a typical hard disk drive (HDD) respectively.

• The 840 EVO mSATA SSD line-up will be available this month globally, and exact launching date can vary depending on the region.

The Samsung 840 EVO mSATA SSD is an extension of the 840 EVO line-up which was introduced in July at Samsung SSD Global Summit. The new SSD features the compact mSATA form factor which is approximately a quarter size of a 2.5-inch SSD, and offers the same level of high density and high performance. 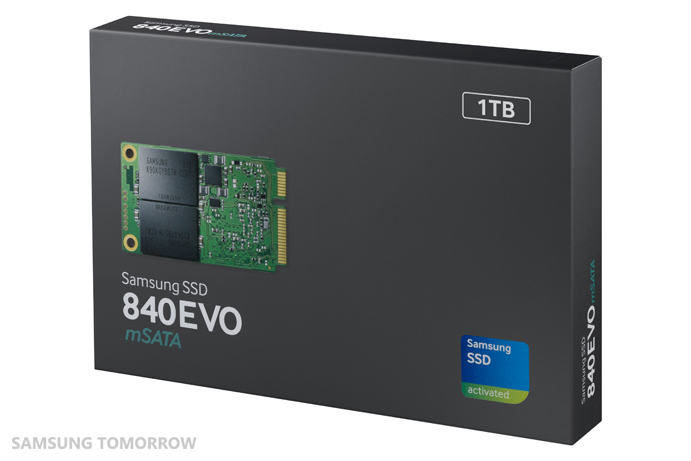 “With the new mSATA SSD line-up offering up to 1TB of memory and an optimized software tool, we expect that consumers can enjoy high storage volume and performance on ultra-slim notebooks besides desktop PCs,” said Unsoo Kim, senior vice president, memory brand product marketing, Samsung Electronics. “We will continue to bring leading-edge SSD products and software solutions with improved quality and reliability, while working on offering higher consumer satisfaction and strengthening competitiveness of our branded memory business.” 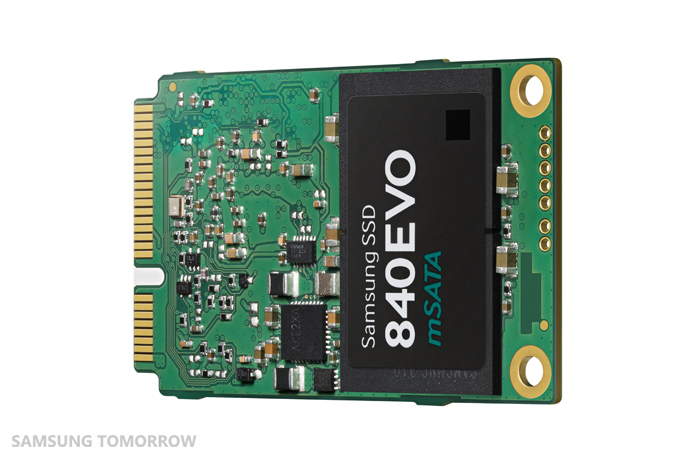 The new 840 EVO mSATA SSD utilizes Samsung’s advanced 128 gigabit (Gb) NAND flash memory based on 10 nanometer class* process technology. To form a 1TB version SSD, a total of four flash memory packages are used, each package having 16 layers of 128Gb chips. Based on the advanced memory technology, the 1TB mSATA SSD comes in a thickness of 3.85 millimeters and a weight of 8.5 grams, which are approximately 40 percent and a twelfth of a typical hard disk drive (HDD) respectively.

The 840 EVO mSATA SSD line-up is available in 120 gigabyte (GB), 250GB, 500GB and 1TB, and achieves the highest level of performance based on Samsung’s proprietary controller and TurboWrite technology. The 1TB version offers 98,000 random read and 90,000 random write IOPS (Input Output Operations Per Second), as well as sequential read and write speed of 540 megabytes per second (MB/s) and 520 MB/s, enabling complex multi-tasking for advanced users. 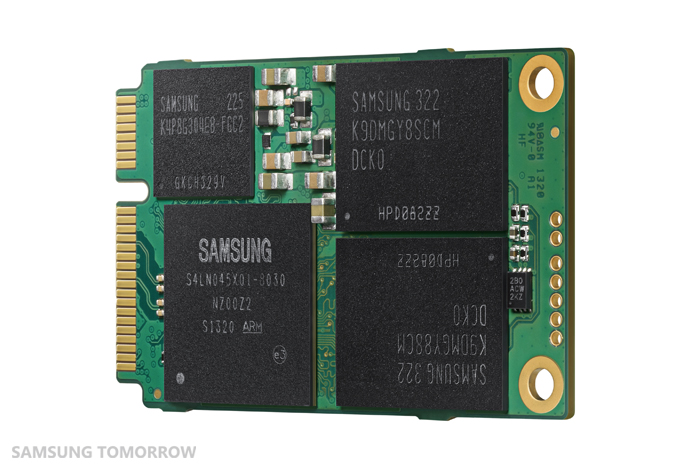 Especially, the new 840 EVO mSATA SSD can be used along with another data storage device embedded on a notebook, either HDD or SSD, as long as the notebook has the mSATA socket. The new mSATA line-up is also offered with Samsung Magician 4.3, a software solution that allows the maximum of over 1,000MB/s sequential read speed on RAPID ( Real-time Accelerated Processing of I/O Data) mode, which is a performance level of approximately twice that of a typical SATA SSD and ten times of an average HDD. Samsung also applied Samsung Magician 4.3 and the RAPID mode on its previous 840 PRO SSD line-up.

Applying 256-bit AES keys, the new mSATA SSD allows strong data security, and is compliant with TCG Opal and IEEE 1667 standards. Users can also easily move their data to the new SSD using Samsung Data Migration as well as Samsung Magician 4.3 which are compatible with Windows 8 and support 10 languages.

The 840 EVO mSATA SSD line-up will be available this month globally, and exact launching date can vary depending on the region. Samsung will continue to introduce leading-edge SSDs with higher performance and security level, and maintain its leading position in the global SSD market.