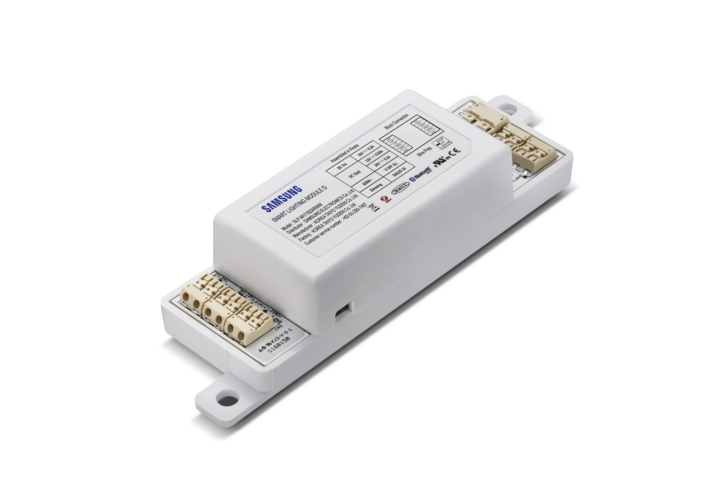 Samsung Electronics, a world leader in advanced components, today introduced a multi-purpose Smart Lighting Module (SLM) – the most fundamental IoT building block – for the fast-growing, smart building and smart city markets. By providing the core building block for a wide variety of potential smart lighting systems, Samsung’s SLM will play a key role in speeding up system development, lowering risk, improving system quality and reducing time to market for smart lighting manufacturers. The module will be sampled with Samsung smart lighting partners and will be shipped to OEMs in April.

“After announcing our smart lighting platform concept last year, we are now rolling out what can be considered the most critical component in a smart lighting system,” said Dr. Jacob Tarn, Executive Vice President, LED Business Team, Samsung Electronics. “Our SLM solves many of the problems that OEMs are finding in today’s smart building and smart city IoT applications.”

Samsung’s SLM is at the heart of the Samsung Smart Lighting Platform, which is designed for integration with LED lighting systems in order to easily transform luminaires into smart, digital nodes. This Internet of Things (IoT) platform incorporates processing capabilities, firmware, connectivity and an open architecture connected to sensors for collecting data and creating new applications.

As the core element of the Smart Lighting Platform, the SLM serves as the essential connector for all types of devices used in smart luminaires including sensors and drivers. The new smart lighting module offers several ports for greater flexibility in making hardware connections, and a script engine that simplifies firmware connections. These allow OEMs to customize a smart lighting device to their needs much faster, permitting development time to be 50 percent shorter or even better with the SLM than without it.

The new Smart Lighting Module also features wireless software update functionality (OTA) and power metering. The SLM enables most smart devices to talk to one another by supporting all open wired and wireless communication protocols, utilizing not only Zigbee or DALI, but also the Bluetooth protocol. It seamlessly connects to most sensor networks and effectively interacts with smart control devices such as mobile phones. This enables smart luminaires to serve as the nodes within a wide variety of smart lighting environments.

Samsung SLM comes in three different types, SLM-D, SLM-A and SLM-P. The SLM-D uses DC input voltage of approximately 12 to 24V from AUX power, while the SLM-A has full functionality with AC voltage from 120 to 277V, and the SLM-P is an upgraded version of SLM-A, which adds a power metering function.

Samsung will continue to expand its smart lighting partnerships to enhance the extent of its end-to-end connectivity solution. Samsung will demonstrate its SLM and showcase most of its LED component line-ups at Booth B04 Hall6.2 of the Light + Building 2016 trade fair in Frankfurt, Germany, March 13th – 18th.