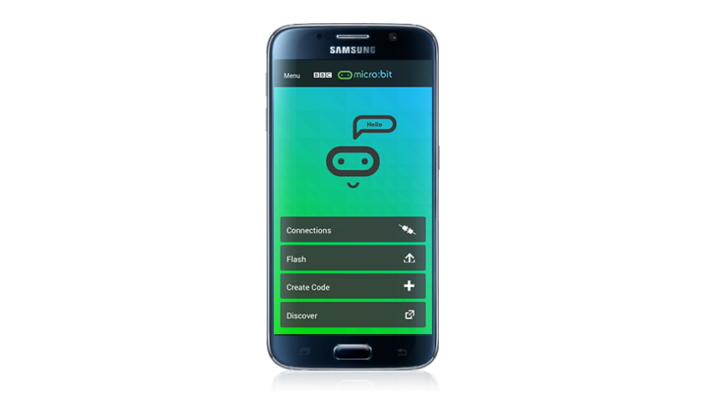 Ahead of MWC, Samsung has launched the official BBC micro:bit app for Android that will connect the micro:bit to smartphones and tablets, allowing young people to code their micro:bit on the go whether they are in the playground, on the school bus or at home with the whole family.

The BBC micro:bit, which will be delivered free to all year 7 or equivalent students this year, is a small programmable hardware device that aims to transform a new generation from passive users of technology to creators and innovators in today’s digital world. Samsung is a key partner in making this free drop of 1 million devices possible in the BBC’s most ambitious education initiative in thirty years.

Samsung will be demonstrating the micro:bit app at MWC. Developed by Samsung’s R&D team as a volunteering project, the app with its unique set of features will allow young people to learn how to code to control their phones and tablets via the BBC micro:bit. For example they can build their own selfie remote controller, launching their phone camera by pressing a button on their micro:bit, or even build their very own security alarm using the micro:bit’s sensors. The possibilities for creative applications are endless as young people can develop useful and fun technology solutions for themselves and their peer group inside and outside of the classroom.

By connecting the BBC micro:bit to smartphones and tablets, which young people are already very comfortable with, the app will introduce them to “connected technology” and the Internet of Things. This is important as coding becomes an integral skill in today’s job market, where code is not only at the heart of technology but also at the heart of products, for example, household appliances in the connected home.

Teachers have already begun to receive their devices which come with teaching resources, off-timetable STEM activity days and hands-on projects that complement the science, maths, design & technology (D&T) and computing curriculums. Samsung has also developed free resources and projects for both teachers and parents to use the app with their children. Samsung BBC micro:bit projects include ‘micro:bit hide and seek’, ‘Get out of my room’, a fun project to build your own security camera, and the ‘hi-tech selfie’. These projects are hosted on http://www.samsung.com/uk/microbit.

The BBC micro:bit is part of the BBC’s wider Make it Digital initiative, and has been made possible by a partnership between the BBC and over 30 partners. The project aims to improve digital literacy in the UK in light of alarming statistics, such as 1.4 million digital professionals will be needed in the next 5 years, and to inspire a new generation of digital pioneers.

Aleyne Johnson, Head of Government Relations and Citizenship, Samsung Electronics UK & Ireland said: “We’re very proud to bring the micro:bit to life in partnership with the BBC and officially launch the app at this year’s MWC. The combination of the micro:bit with the app will be a powerful learning tool for young people, inspiring them not only to use technology but to develop fun applications for themselves and their friends. As digital skills such as coding are increasingly important for all industries, we hope that the micro:bit will give year 7s a head start by putting them in the driving seat as developers.”

Sinead Rocks, Head of BBC Learning said: “We want children to be able to programme the BBC micro:bit from any device they want, wherever they want, whenever a moment of inspiration hits them. Pupils and teachers have told us they’d love to be able to code on the go, and we can’t wait to see the ingenious ways they’ll get creative with the app. It also means they can start controlling their handheld devices directly through the micro:bit, which is a hugely important part of understanding how the technology works.”

The Samsung micro:bit app is free to download from Google Play here: https://play.google.com/store/apps/details?id=com.samsung.microbit.