Samsung Rises to No. 7 in Interbrand’s ‘Best Global Brands 2014’ Report

Up one spot this year, Samsung recorded a brand value of $45.5 billion in 2014, a 15 percent increase over last year’s $39.6 billion. Since it entered into the Top 10 in 2012, Samsung continued to show significant growth in its brand value.

Samsung has maintained its No. 1 position in the smartphone market for two years, which was boosted by the launch of flagship smartphone products including new devices in the Galaxy S and Note series, while wearable devices like Samsung Gear and Samsung Gear VR point to new engines of growth. Collaboration with world-renowned fashion brands and sponsorship of the 2014 Winter Olympics also increased Samsung’s brand value with consumers.

In the television market, Samsung managed to extend its global industry leadership, which is now in its eighth year; this was helped by the introduction of the first Curved TVs. Samsung is also leading the premium market for digital appliances, with new product line-ups such as the Chef Collection. The company’s partnerships with Michelin-starred chefs and world class furniture brands underline Samsung’s innovative marketing.

Meanwhile in the memory business, Samsung has successfully maintained its No. 1 position for the 21 years, supported by its solid technology leadership and new consumer-centric marketing initiatives.

Samsung managed to improve its brand value by focusing across the company on one common brand ideal: ‘Accelerating discoveries and possibilities’, and making it come to life with a number of consumer engagement programs, such as the ‘Launching People’ campaign, which reached more than 100 million people globally.

“We want to continue our efforts to become an aspirational brand through innovative ideas and technologies that give people the power to discover new experiences and enhance people’s live,” said SP Kim, the Chief Marketing Officer of Samsung Electronics.

Samsung entered the top 20 Interbrand global brand list for the first time in 2009, and moving into the top 10 in 2012 – just three years later. 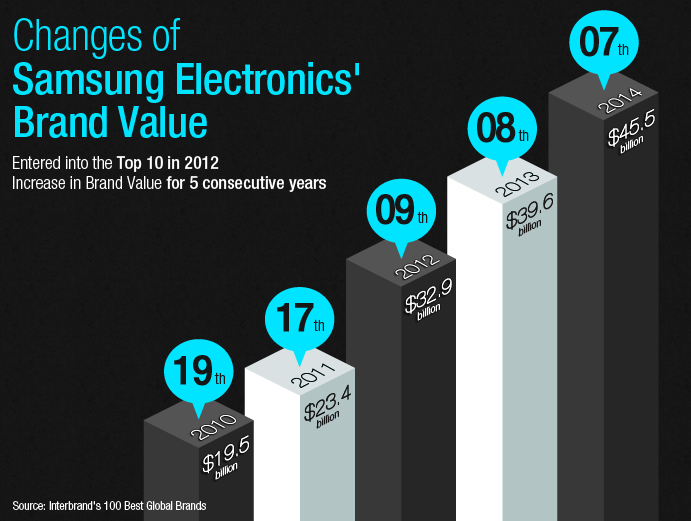