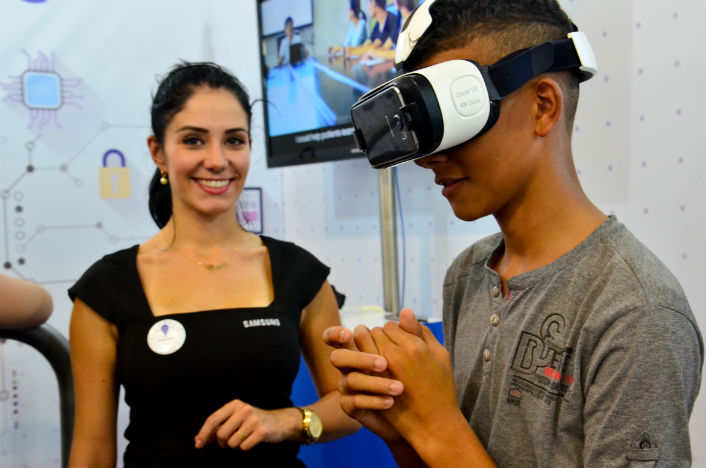 Samsung Electronics announced its commitment to education and presented its innovations including virtual reality devices at the Brazilian Fair of Sciences and Engineering – FEBRACE 2016, which was held during March , in São Paulo – Brazil. During the event, which was promoted by the Polytechnic School of the University of São Paulo (Poli – USP), students from high school and technical colleges from across Brazil presented more than 300 projects focused on several knowledge areas.

On the third day of the event, three Samsung executives, Gabriel Farias, Guilherme Selber and Antonio Marcon, gave lectures on the Internet of Things (IoT) and Samsung’s innovations. On the following day was an award ceremony, during which a project was awarded the “Samsung Internet of Things Award.” The project was recognized for providing the best solution—using connectivity and technology—to a local community issue. As recognition, the winning team received a trophy, medals and educational kits with electronic materials.

“Samsung uses its global network and its innovations to generate positive changes around the world,” said Helvio Kanamaru, Senior Manager of Corporate Citizenship at Samsung Latin America. “We believe that technology is an excellent mechanism for young people to have access to a world of possibilities and develop new opportunities.”

“FEBRACE invites and encourages students from high school to develop projects and exercise scientific research,” Kanamaru said. “It is an important convergence of social responsibility, education and integration with the academic world – topics that are very important in Samsung’s Corporate Citizenship platform.”

FEBRACE’s coordinator, professor Roseli de Deus Lopes, highlighted the expectations of the fair in relation to the students.

“The most important aspect is not the result of developing a prototype or product, but the whole process, the various stages of research, reflection, construction and observation required for projects development,” Ms Lopes said

Samsung has contributed to improvements in education through its own initiatives carried out in Latin American countries, such as ‘Respostas para o Amanhã’ (Solve for Tomorrow), a contest that encourages students and teachers from public high schools to develop projects that  benefit their communities, using the knowledge acquired in the classroom.

The company has also been developing the Tech Institute Program, which offers opportunities for young people to obtain technical training through the sponsorship of scholarships. Last year, Samsung promoted a special edition in Brazil – the Tech Institute Internet of Things, a course offered to high school students in order to encourage them to create solutions for a smart house using the Internet of Things. This edition of the program was held in partnership with the Integrated Technology Systems Lab (LSITEC) that is also responsible for organizing FEBRACE.

“We live in an increasingly connected world,” Kanamaru said. “Samsung’s electronic devices already offer great interaction between them, but we want to go beyond. Therefore, we are promoting the Tech Institute IoT with LSITEC and sponsoring FEBRACE. The new innovation-based labor market needs young professionals with solid training in those fields.”