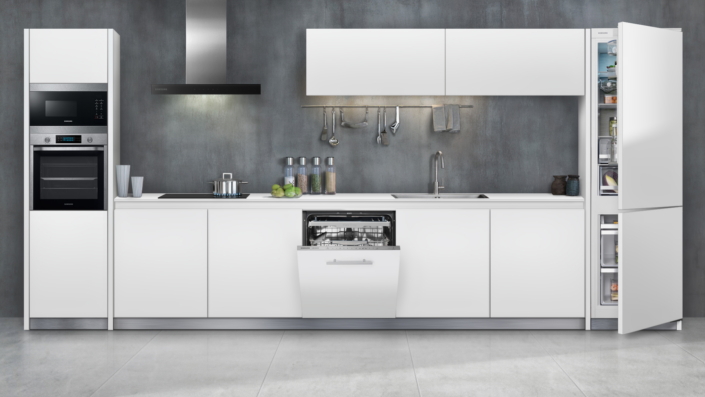 Samsung Electronics today announces three new built-in appliance product lineups, the Contemporary Line, the Black Line and the original Chef Collection, designed to meet the tastes of European consumers. All new models in the lineups balance function with bespoke design in ways that blur the distinction between home furnishing and home appliance.

The Contemporary Line is Samsung’s newest built-in lineup. It features many of Samsung’s highly regarded kitchen appliance technologies and innovations, and the new true built-in refrigerator unit is expected to perform as strongly as Samsung’s freestanding models, which currently lead Europe’s refrigerator market.

The new true built-in refrigerator unit from the Contemporary Line is backed by thoughtful and flexible internal compartments, and innovative technologies such as No Frost, Twin Cooling PlusTM, Cool Select Zone Plus. The No Frost feature addresses consumer demand to eliminate frost, which is an old problem of traditional built-in refrigerators, that can ruin food taste, cause bacteria contamination, and even harm fridge performance. Cool Select Zone Plus allows users to set freezer temperatures between -23℃ and 2℃ so they can customize their built-in to maximize food freshness. The refrigerator in the Contemporary Line can even be controlled wirelessly with Samsung’s new dongle, allowing owners to monitor and control settings from a distance.

The Black Line is introduced in Europe at the second half of this year with its refrigerator awaiting release early next year. The bold move to use an unconventional color to paint Samsung’s new built-in package reflects a shift in trend, which sees the kitchen as a central living space that is more than just a place for cooking and dining. The semi-matte black finish absorbs surrounding light and gives a modern and timeless look. The Black Line includes a refrigerator, oven, compact oven, induction cooktop, range hood, and dishwasher.

The Chef Collection is a premium lineup comprising a Kitchen FitTM design refrigerator, built-in oven, compact oven, warming drawer, induction cooktop, range hood and dishwasher. These units were inspired by insights from the Michelin-starred chefs who are members of Samsung’s exclusive Club des Chefs. The superior design and innovative technologies are geared towards maximizing the cooking and dining experience. The refrigerator boasts Samsung’s Twin or Triple Cooling technology, which cools the fridge and freezer separately with two or three different evaporators so each compartment maintains optimal temperatures and humidity.

“We see much potential for built-ins to meet customer demand in Europe and have invested aggressively to develop a thoughtfully designed and highly innovative lineup,” said Suh Byung-Sam, Head of Samsung’s Digital Appliances business. “We will continue to target the market here in Europe with unbeatable technologies and features that uniquely meet consumer needs.”

Samsung Electronics’ booth will be open at Level 2 of City Cube Berlin from September 2 through 7 for IFA 2016.