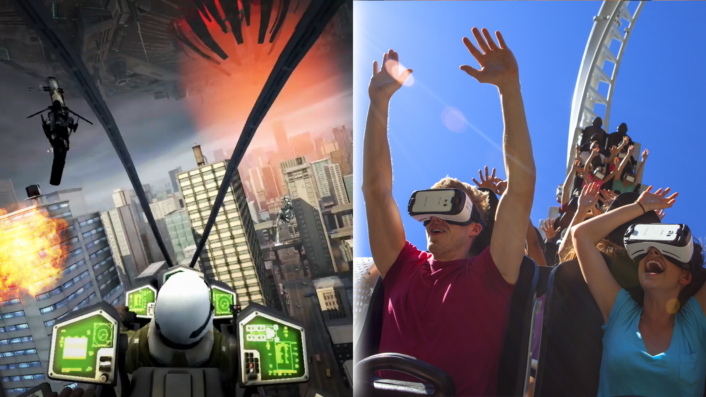 In partnership with Samsung, Six Flags is taking its signature brand of thrills to the next level and beyond in fully immersive, virtual riding experiences using Samsung Gear VR. Some of Six Flags’ most popular coasters will be equipped to allow riders wearing Samsung Gear VR headsets to feel the heart-pumping adrenaline of steep drops, inverted loops and powerful twists and turns as gyros, accelerometers and proximity sensors synchronize all of the action in an incredibly realistic 360-degree virtual reality world.

“This remarkable technology is a definite game-changer for theme park rides and represents everything our brand stands for—delivering the most thrilling and innovative rides and attractions in the world,” said John Duffey, Six Flags President and CEO. “With the addition of these virtual reality coasters, Six Flags will be introducing more than double the number of new coasters and rides than we did in 2015, and more than any year in the last decade. Innovation is part of our DNA, and news in every park every year is driving higher guest satisfaction and building strong momentum for our company.”

“What makes this partnership so compelling for consumers and the broader tech industry alike is that both companies are committed to pushing the boundaries of what’s possible – and bringing a VR coaster to life is certainly a new and thrilling proposition,” said Marc Mathieu, chief marketing officer at Samsung Electronics America. “Now, people can be immersed into a totally new universe while riding a roller coaster, powered by Samsung Gear VR virtual reality devices. This transforms the modern roller coaster into a totally new, one of a kind sensorial experience – powered by technology. We are excited to work with the premiere brand in theme parks to bring Samsung’s VR technology to nine Six Flags locations across the U.S.”

About the VR Roller Coaster Experiences

Six Flags and Samsung will launch the new VR Roller Coasters beginning this month and into the summer, totaling nine coasters across the U.S. On the six New Revolution Virtual Reality Coasters, riders are transported to a futuristic battle to save planet earth from an alien invasion. Riders are the co-pilots in their own fighter jets as they strap in for air-to-air combat. Taking in the view around them, riders will see other aircraft in an underground secret bunker. As the aircraft moves to a landing pad, it begins to launch its thruster engines, lifting the craft straight up through the roof. During the ascent, riders can test fire their weapons using the world’s first-ever interactive gameplay technology on a roller coaster. As riders clear the roof, they realize they are on top of a skyscraper and about to launch off the edge of the building diving straight down on the first drop of the ride. The aircraft races through the city until reaching the edge of the skyline where riders see the mother ship hovering above. The mother ship is heavily protected by drones and the mission is to get past the drones, fire on the mother ship and destroy it. This elite fighter squadron experience will make its debut on the following six roller coasters:

On Six Flags’ three new SUPERMAN Virtual Reality Coasters, once riders take their seats and fasten the headsets, they will be fully immersed in the 360-degree comic-book world of Metropolis. Guests will be taken on a leisurely (or so they think) tour of the city of Metropolis, courtesy of Lex Corp Sky Tours. Just after departing the station riders encounter Lex Luthor who uses an anti-gravity gun along with his army of Lex Bots to create chaos throughout the city with cars, taxis and buses floating in mid-air around the rider’s vehicle. As the Lexbots continue shooting at the vehicle, SUPERMAN uses heat vison to destroy the anti-gravity gun, causing all objects to suddenly fall, including the train as it takes the first giant drop of the roller coaster. Riders then soar alongside SUPERMAN as he battles the evil Lexbots through hairpin twists and turns, loops, dips and dives before ultimately defeating Lex and the Lexbots, and returning safely back into the station. This amazing adventure will debut on these Superman-branded coasters:

About DC Entertainment
DC Entertainment, home to iconic brands DC Comics (Superman, Batman, Green Lantern, Wonder Woman, The Flash), Vertigo (Sandman, Fables) and MAD, is the creative division charged with strategically integrating its content across Warner Bros. Entertainment and Time Warner. DC Entertainment works in concert with many key Warner Bros. divisions to unleash its stories and characters across all media, including but not limited to film, television, consumer products, home entertainment and interactive games. Publishing thousands of comic books, graphic novels and magazines each year, DC Entertainment is one of the largest English-language publishers of comics in the world.

SUPERMAN and all related characters and elements © & ™ DC Comics. (s16)