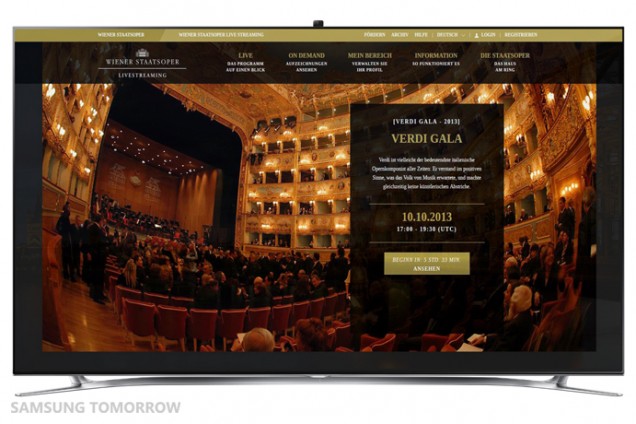 Starting on 27th October 2013, opera enthusiasts can watch selected performances and premieres from the world famous opera house live for only 14 EUR via an exclusive app for Samsung Smart TVs or via the Web. A second screen app for Smartphones and tablets also enables you to access subtitles and, starting December 2013, musical scores for the relevant works during the live broadcast. A separate programme booklet app offers further digital multimedia content with background information on the opera, the performers, and the composer.

“Throughout history, technology has provided art with new tools for expression. Today, art and technology, these two seemingly distinct worlds, are interlinked more than ever, with technology being a fundamental force in the development and evolution of art. At the same time, technology is strongly inspired to push its boundaries. In this regards, I believe this project will mark a significant milestone, helping people to engage with art in a smarter and more innovative way.” Explains Seok Pil Kim, President & CEO Samsung Electronics Europe.

It is possible in two ways to be there right up close for opera and ballet performances of the Vienna State Opera livestreaming: firstly via an exclusive Samsung Smart TV app; secondly via an online live stream on the streaming portal of the Vienna State Opera (http://staatsoperlive.com). Performances will be streamed in up to full HD resolution, depending on your Internet connection. The live transmissions begin 30 minutes before the actual curtain-up with images to get you in the mood as well as additional information about the State Opera or the work itself, usually at around 7pm (CET). For international audiences, a time-staggered live transmission at the respective prime time is also offered.

During the broadcast, you can change between two camera perspectives: the “total” view of the stage as well as a live-edited opera or ballet film. You can download the free TV app via the Samsung Smart hub in the section “Samsung Apps”.

Wide range of additional functions thanks to second screen app 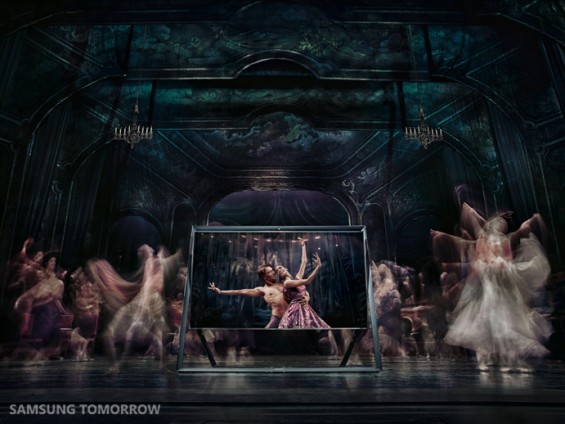 To round off the cultural enjoyment in your home, Samsung and the Vienna State Opera have developed an additional supplementary app for tablets and smartphones: the ‘Vienna State Opera second screen app’. This application, which can be downloaded for free via the Google Play store for Android as well as via the App Store for iOS devices, offers many additional functions. For example, during live transmissions you can follow the musical score (starting December) or the subtitles. Subtitles are already available in German, English or Korean; more languages are planned for the near future.

Using the supplementary app on the so-called ‘second screen’ parallel to the live broadcast is easy: when it starts up, the smartphone app synchronises with the app on the Smart TV, automatically recognising the current place in the opera/ballet broadcast via audio watermarking and displays the relevant subtitles or score. By the end of 2013, seven performances will be streamed, starting with “Der Rosenkavalier” by Richard Strauss on 27th October 2013.

The price for a Vienna State Opera livestream is 14 EUR (incl.VAT) via an on-demand store which is also integrated into the livestreaming portal and the Smart TV app. Productions already broadcast can be accessed for a price of 5 EUR (incl. VAT). The Vienna State Opera programme booklet app, giving users interesting background information about the respective work, the performers or the composer costs 2.69 EUR (incl. VAT). Payment takes place directly via the streaming portal of the Vienna State Opera (http://staatsoperlive.com). You can pay via credit card, direct payment or bank card (Maestro and similar systems). The payment process is currently available in German, English, Japanese and Turkish. Korean is to follow shortly.