These days, it’s easy to see why, when it comes to PC storage, consumers around the world are increasingly ditching traditional hard disk drives (HDDs) in favor of a faster and more reliable alternative: the solid-state drive (SSD).

As the world leader in advanced memory technology, Samsung Electronics produces a wide range of SSDs that offer users the performance they need to take their PC experience to the next level. In this article, we’ll walk you through the types of SSDs you’ll find in the company’s catalog – including consumer, portable and data center SSDs – help you pick the right one for your needs, and show you how a relatively small upgrade can make a big difference. 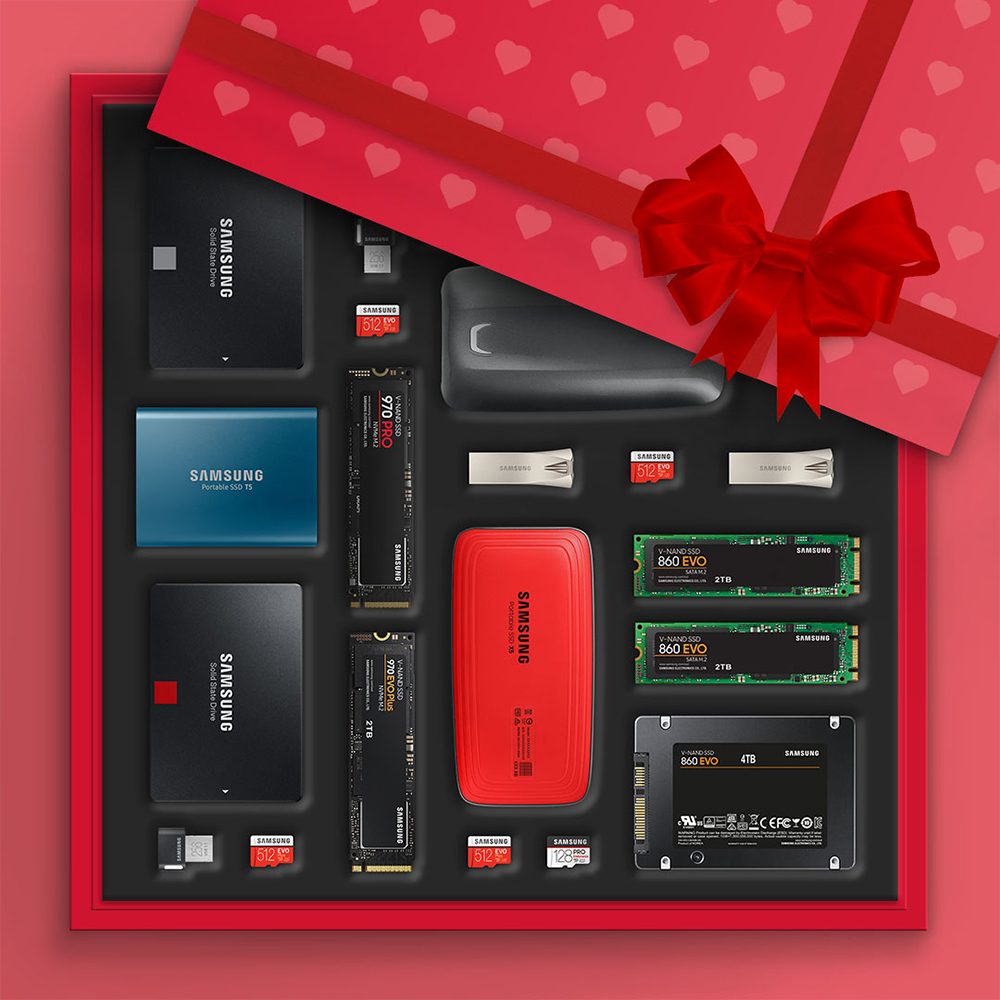 Whereas HDDs have high-risk moving parts and fragmented files that can bottleneck speeds, NAND flash-based SSDs, such as Samsung’s 860 Series and the 970 EVO Plus, feature no moving parts to slow you down.

Let’s take a closer look at some of Samsung’s standout options.

The Jack-Of-All-Trades Drive: the 860 EVO

If you’re in the market for an SSD that’s fast, reliable and easy on the wallet, we’d recommend the 860 EVO.

Featuring Samsung’s V-NAND technology, 10nm mobile DRAM, sequential read and write speeds of up to 550MB/s and 520MB/s, respectively, and up to four times faster boot speeds than conventional HDDs, the 860 EVO is the ideal option for PC and laptop users who are interested in enhancing their computer’s everyday performance.

The 860 EVO’s fast transfers and all-round premium specs make multi-tasking a breeze, and transform everything from browsing the web to document management, to video editing and online gaming. 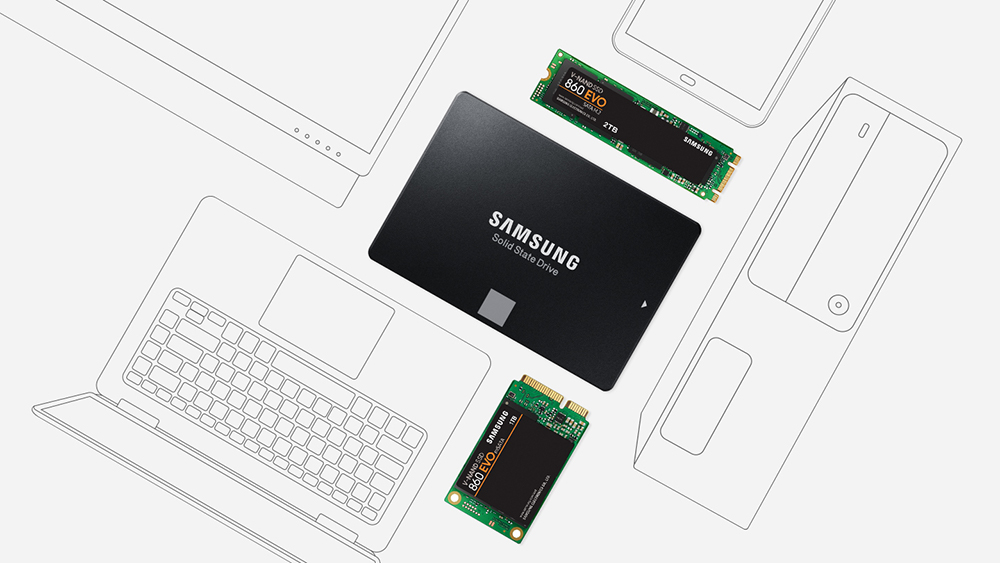 The Bang-For-Buck Option: the 860 QVO

PC users who are interested in a high-quality, high-capacity SSD at a reasonable price point should look no further than Samsung’s 860 QVO.

When it comes to storing terabytes (TB) worth of data, PC users have historically turned to HDDs because they saw high-capacity SSDs as being too expensive. That all changes with the 860 QVO – a terabyte SSD that delivers faster, more stable performance than conventional HDDs, at a price point that won’t break the bank. 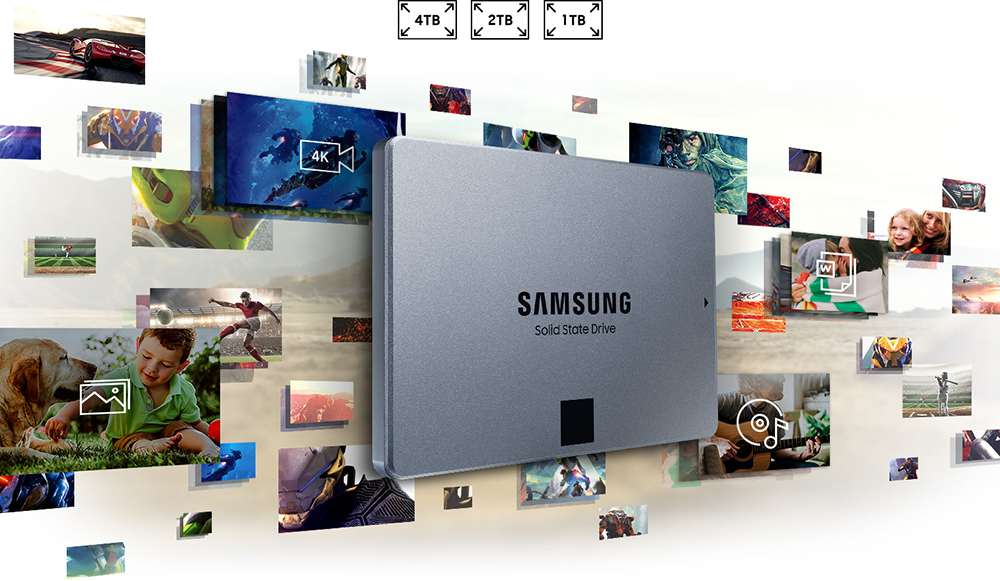 The 860 QVO comes with Samsung’s latest 4-bit MLC NAND flash technology, as well as a new, SATA-optimized MJX controller, and offers sequential read and write speeds of up to 550 MB/s and 520MB/s, respectively. This makes the 860 QVO’s speed comparable to that of the conventional 3-bit SATA SSDs.

The Professionals’ Choice: the 970 EVO Plus

If you were looking to build the fastest computer in the world, the 970 EVO Plus would be the SSD you’d need to help make it happen.

Featuring blazing-fast sequential read and write speeds of up to 3,500MB/s and 3,300MB/s, respectively – which makes this drive approximately six times faster than conventional SATA SSDs – the 970 EVO Plus offers the fastest speeds among NVMe-based (non-volatile memory express) M.2 SSDs. With peak random read and write speeds of 620,000 and 560,000 input/output operations per second (IOPS), the 970 EVO Plus is capable of storing a (3.6GB) full HD movie file in a single second. 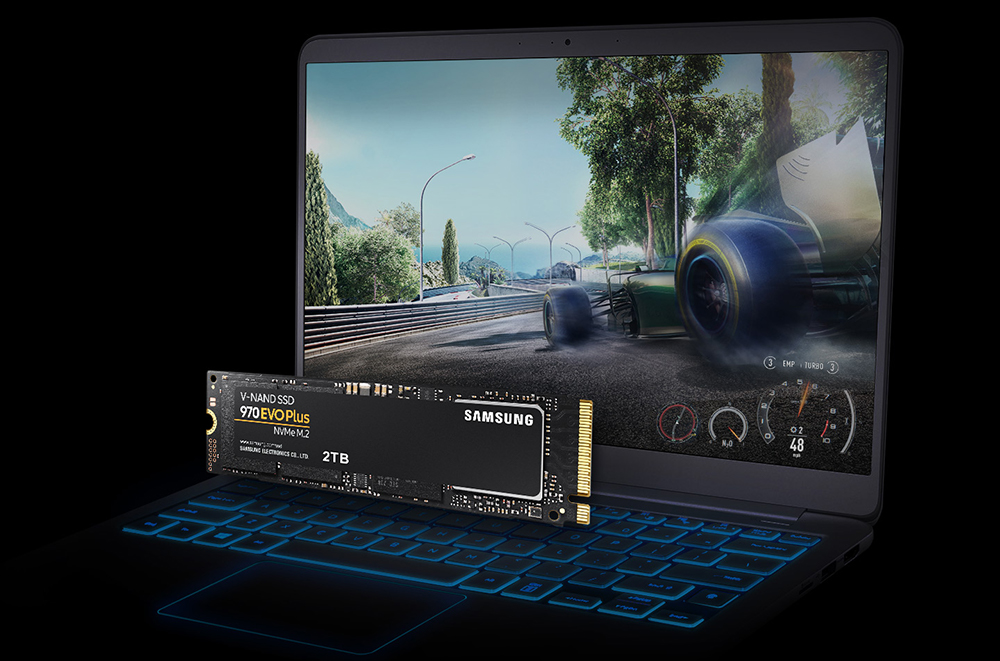 The SSD’s game-changing speeds and premium specs make it the perfect choice for tech enthusiasts, hardcore gamers, and professionals who require a drive that offers unrivaled performance, superior reliability, and best-in-class capacity – whether it be for playing high-performance games like Player Unknown’s Battlegrounds, or running professional video editing or 3D modeling software.

Super-fast portable SSDs like Samsung’s Portable SSD T5 and Portable SSD X5 offer you the freedom to take your entertainment, coursework and games with you wherever you go. They’re designed to easily slide into a pocket or purse, and they offer tons of storage as well as fast data transfers to laptops, smartphones, game consoles and more.1

For Those with a Need for Speed: the Portable SSD T5

The Portable SSD T5 offers users the perfect blend of speed and style. 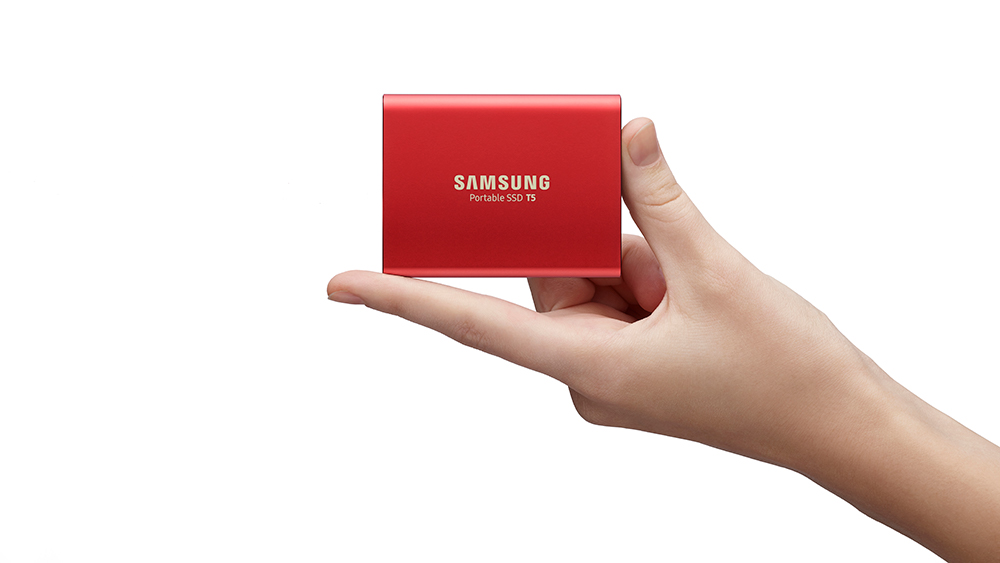 Peak transmission speeds of up to 540MB/s make the T5 roughly five times faster than external HDDs, and with its compact form, it’s as small as a credit card. The SSD is available in a variety of stylish colors, and features an aluminum body that’s not only luxurious to the touch, but durable enough to withstand the bumps and drops that come with everyday use.2 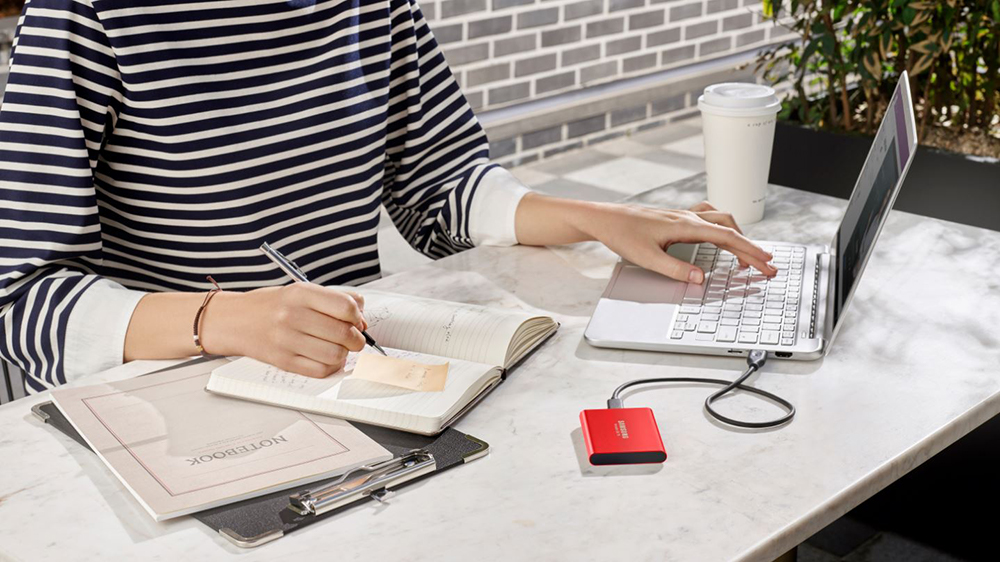 The T5 is perfect for those who’d like to supplement their laptop or game console’s limited storage without compromising performance. The T5’s fast speeds ensure that programs and games installed on the drive run smoothly, and its compatibility with portable devices including Android-based smartphones allows users to enjoy seamless data transfers when they’re on the go.

In an era where people are constantly creating and sharing dynamic content, technology that supports fast data transfers has become more necessary than ever. 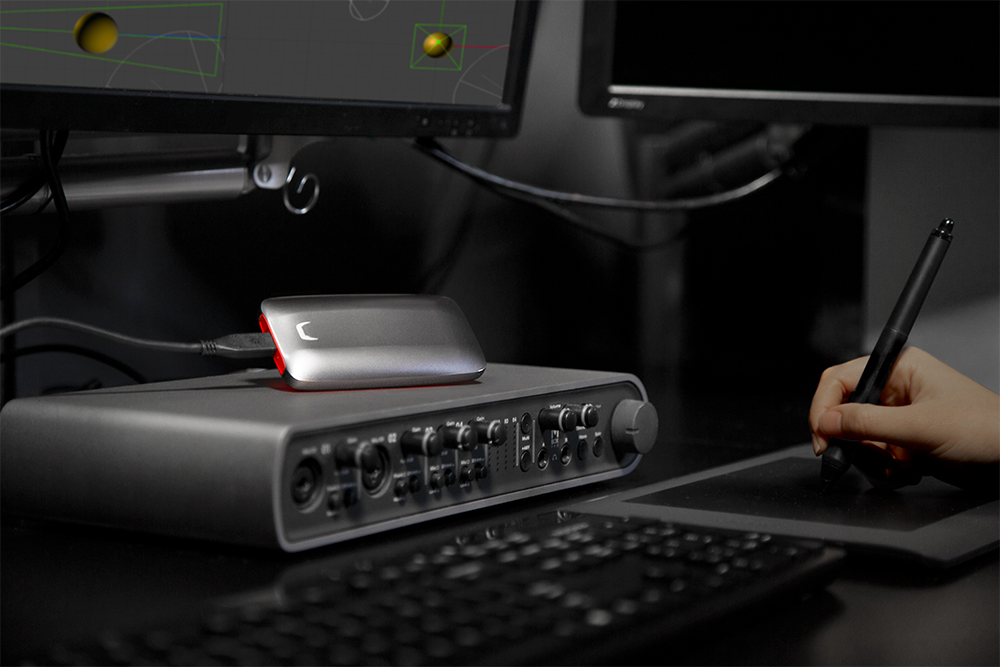 The SSD features maximum read and write speeds of 2,800MB and 2,300MB, respectively, and is capable of storing a high resolution (20GB) 4K UHD video in just 12 seconds. That’s over 25 times faster than conventional HDDs. The X5’s premium specs also mean that content creators who run video and image-editing programs directly through their drive will enjoy the level of fast, stable performance they need to do what they do best.

It’s not just consumers and professionals who are reaping the benefits that come with making the switch to Samsung SSDs. Enterprises, too, are utilizing Samsung’s solutions to add efficiency to their data centers’ server systems.

The Budget-Friendly Option: the 860 DCT

SSDs utilized in enterprise data centers need to be durable enough to operate at a high level 24 hours a day, and engineered to meet the evolving needs of today’s small and medium businesses (SMBs). Samsung Electronics offers a diverse lineup of SSDs that cater to a wide range of budgets, and offer SMBs fast, reliable performance, high capacities, and of course, enterprise-class security. 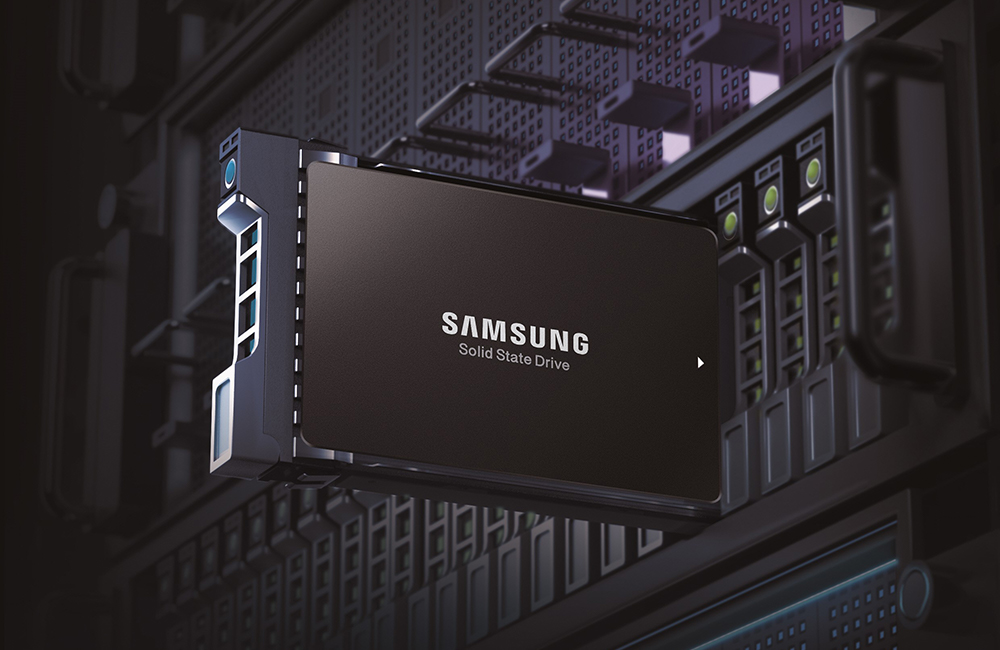 Samsung’s 860 DCT is a solid option for businesses who are interested in lowering their data centers’ TCO (total cost of ownership), as it’s more cost-effective in this area than HDDs. It’s optimized mainly for ‘read intensive’ systems, available in capacities ranging from 940GB to 3.84TB, and ideal for content delivery network systems.

Other entries in Samsung’s data center SSD lineup include the 883 DCT, 983 DCT and 983 ZET. Together, the SSDs in this comprehensive portfolio allow businesses to choose the device that suits their unique needs.

1 Compatibility with host devices may vary.

2 During Samsung’s internal tests, the T5 was shown to safely withstand drops of up to two meters (6.6 feet).