Poland is a country that boasts a wide range of fascinating points of interest, from being the birthplace of renowned composer Frédéric Chopin to possessing the largest castle in the world. But a perhaps less recognized fact about the Central European nation is that paragliding is possible nearly anywhere within its borders, be it off its mountain ranges, along its coastal cliffs or cross-country along its expanses of flat terrain.

One such individual to take full advantage of Poland’s suitability for cross-country paragliding is Head of Online Business at Samsung Electronics Poland – and multi-award-winning flyer – Lukasz Sieminski. Given the time commitment and skillset necessary to maintain such a hobby, it is with admirable organization and hard work that Sieminski has managed to achieve balance in both his professional and personal life. 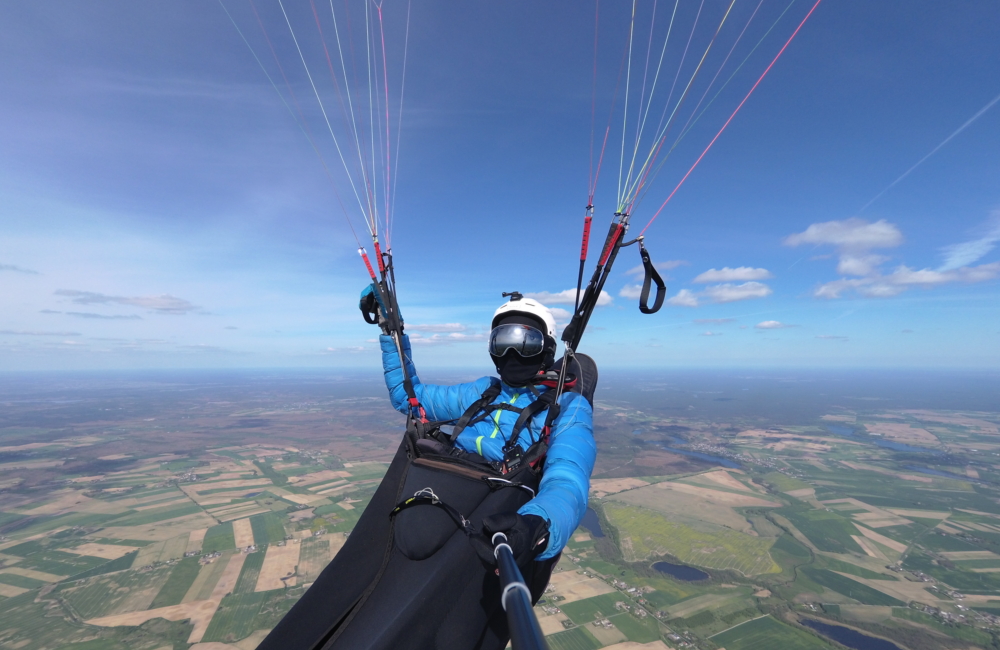 Siemenski soaring miles above the ground during a cross-country flight. “When paragliding, the world is completely different. During the flight you are just in the ‘here and ‘now’, looking for simple answers.”

Paragliding is the accomplished sport of flying lightweight glider aircraft that do not use any engines and rely simply on the sun and the wind to stay airborne. The sport traces its history back to 1961, when French NASA engineer Pierre Lemoigne cut strategically-placed vents in a parachute to allow it to ascend into the air and be steered manually.

Cross-country paragliding is the variant of paragliding in which distance is the most important parameter and is often recorded in hundreds of kilometers per flight. “We play with clouds, we travel like birds,” muses Sieminski. “Paragliding is the easiest way to touch the clouds!”

Having taken up paragliding purely for fun in 2011, Sieminski achieved his Pilot license within a year and then his sport license in 2014 which has allowed him to take part in competitions. Sieminski has always been interested in cross-country flying – his favorite trips are ones that cover at least 200km in distance and can take anywhere from 7 to 10 hours. “You have time to think about everything and nothing,” he notes.

While for some, flying competitively might appear like an arduous undertaking for the average amateur paraglider, for Sieminski, it came naturally. After every cross-country leisure flight Sieminski did in the first few years of his hobby, he – much like the majority of Polish pilots do – would automatically send his flight GPS log to a special internet platform where it would then be compared with others. This practice for him started off just for fun, but by the end of his third year as a paraglider, he was ranking along with the top scorers across the country.

Sieminski’s reputation as a glider has only continued to soar. Since 2014, he has been taking home first place in the yearly Polish Cross-Country Competition, in which over 1,500 pilots took part in last year. Most impressively, the past two years he has come first in the ‘competition’, wing class category while competing on a lower-class wing vehicle – comparative to winning an 850cc motorcycle race on a 700cc motorcycle.

Sieminski mid-flight over Dolomites in Italy. His hobby often brings him into contact with breathtaking scenery

He occasionally takes part in the official Polish Championships (winning twice in Standard class, in 2014 and 2016), but flying, for him, still remains purely based on enjoyment, not just achievement. In championships, the best flyers are determined based on the amount of time they take to navigate a set course, whereas Sieminski prefers flying non-defined routes. “Sometimes we land after sunset – especially in the mountains, it can be such a magical moment!”

Sieminski has some sage advice to anyone considering taking up paragliding for the first time. “Don’t start gliding alone at home!” he warns. “Go to paragliding school first. Learning things from the very beginning may seem basic, but it is necessary. I have luckily been in no accidents but only because I finished all courses needed to gain a pilot license.” But Sieminski stresses that it is worth it; “You’ll spend that time training with wonderful people in beautiful landscapes!”

Not only does his hobby allow him to cover large swathes of his homeland, but it has also led him to explore some of the most beautiful terrain in the world. So far, Sieminski has flown in the whole Alps region, the Himalayas, Kenya, Brazil and Australia. And while you might think of paragliding as a particularly solitary sport, Sieminski disagrees.

Siemenski about to take to the skies in Bir Biling, India (left) and enjoying a flight with other passionate paragliders in Quxiada, Brazil (right)

“Every place I explore is not just amazing for flying, but also for meeting other dynamic individuals who share my passion,” he notes. “You never fly alone – every flight is always an expedition with your friends in learning how to co-operate. The best flights are then when you can fly very close to your fellow pilots, helping each other in-flight and being in constant contact via radio. In case of any accidents or just after landing, you know very well that you are not alone – your friends are there with you!”

Sieminski admits that the biggest challenge facing him in both his work and home life, as it is for most of us regardless of our pursuits, is time. In order to commit himself properly to the hobby, he spends every holiday and most weekends during paragliding season (May to August) out flying. “I have been taking my paraglider on all holidays with me for 7 years now!” he admits. “Luckily for me, my wife accepts that I bring my glider on holiday with us and supports me every single day.”

The key to finding balance between work, family and pastimes? “We just have to try!” enthuses Sieminski

Sieminski’s takeaway from his hobby is that it is possible for everyone to find a good balance between work, family and hobby; “We just have to try!” And despite his already impressive series of cross-country paragliding achievements, he still has more he wishes to achieve. “My goals are to continue to enjoy it as much as I do now, to break the record of 300km in a single flight and obtain another Polish national record, and to return to the Himalayas to sail through the range’s highest mountains.” Given his passion, there is no doubt he will be successful at all three.