While some may shy away from adversity, Jinwon Choi, from Samsung Electronics’ Device Solutions Division, likes to meet challenges head-on. Due to complications experienced at birth, Choi has several physical impairments, including limited mobility in his hands and difficulties with speech and walking. Yet throughout his life, Choi has maintained a steadfast determination to overcome obstacles, viewing physical challenges as something to embrace, rather than avoid.

From running in a 10km race, to learning to bake, Choi has tested his abilities in various fields as he confronts stereotypes and defies expectations. And, after a trip to Boracay, a small island located in the Philippines, he was inspired to take up scuba diving. 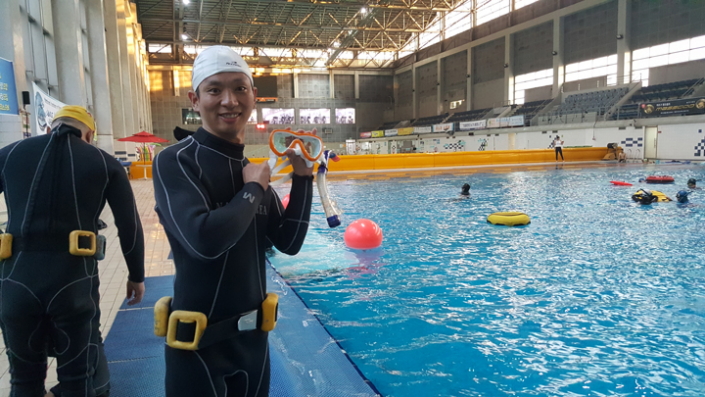 Jinwon Choi gets ready for a dive.

Finding instructors who were confident enough in their abilities to teach Choi to dive was a challenge in itself. Fortunately, last June he took the plunge and began learning with Samsung’s scuba diving club, where several members are also trained professional diving instructors. 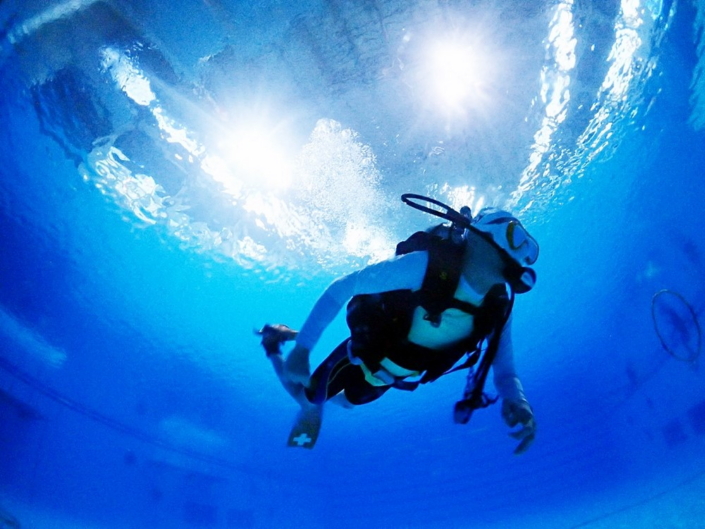 Choi perhaps underestimated the challenge ahead of him, perhaps because he completed the diving program he undertook in Boracay with relative ease. However, he soon discovered that operating his inflator was difficult due to the impaired mobility of his fingers, which also made it harder for him to equalize. Moving in the water was also more challenging, as his legs produced less drive to move forward. Yet, like so many first-time divers, his greatest adversity of all was fear.

Practicing until his air tank was exhausted, Choi took every opportunity to confront his fears at the club’s training sessions, after work and on weekends. When he wasn’t diving, he would swim dozens of laps in the swimming pool, wearing a mask and flippers. He also diligently took notes during his diving theory classes and studied whenever he had a spare moment. 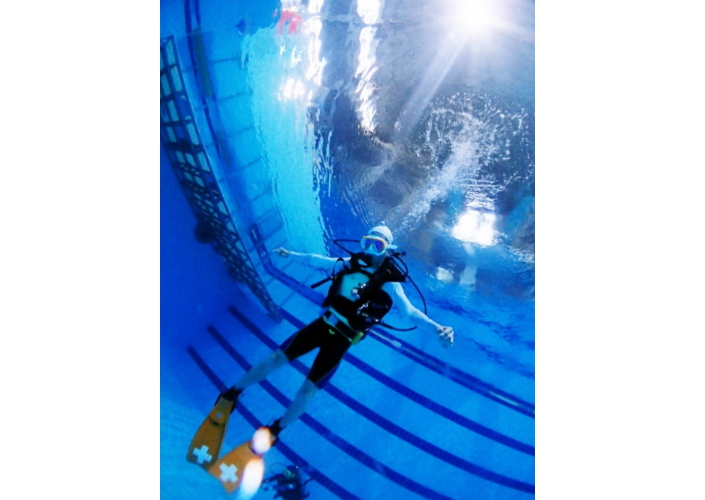 After two months of practice in the swimming pool, Choi was ready to attempt his first ocean dive in the beautiful waters surrounding Jeju Island. He was filled with nervous excitement, wondering if he would successfully finish his open water training.

On August 10, 2018, he dived into the deep blue ocean, with two instructors helping him navigate the water. While the deep waters may look a clear blue from above, once submerged the ocean can seem much darker and more impenetrable. The water was also cold, despite the summer weather, making Choi more anxious about his first dive. 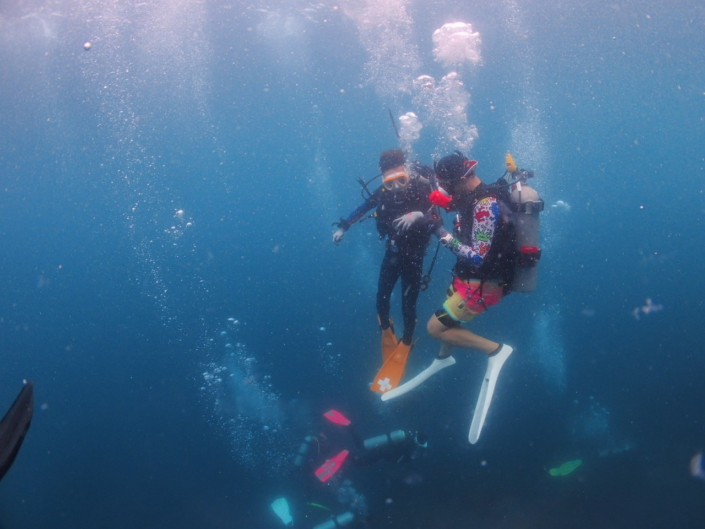 With a deep breath, he calmed himself and began to take in the view around him.

“As I relaxed, I started to really see the stunning scenery surrounding me,” Choi recollected. “It was truly amazing to see marine plants for the first time, with fish swimming close by. I was overjoyed to see coral reefs with my own eyes – I had only seen them on television before.”

Choi did encounter some complications during his training. On the second day, he ventured further offshore and was caught unawares by a tidal current. But Choi insists that, as a powerful force of nature, tidal currents are simply part of a list of challenges that all divers have to overcome. 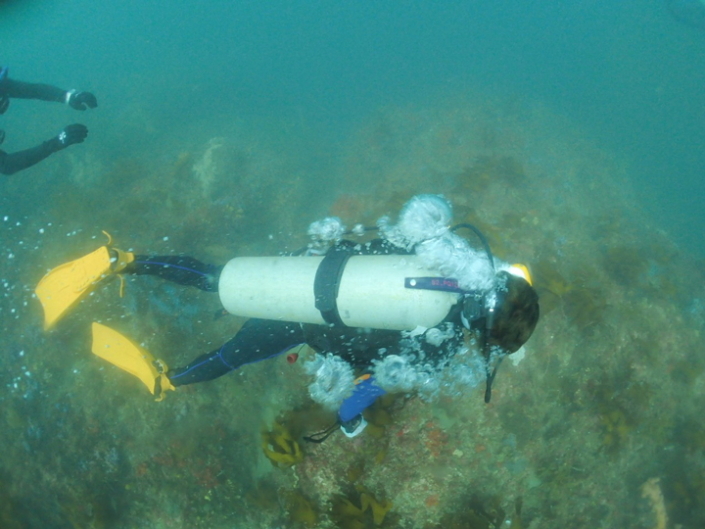 “I have less strength in my kick than other divers, so it isn’t easy for me to get away from tidal currents. I’m planning to practice more in the swimming pool to strengthen my legs and find a way to kick more efficiently.”

Finally, at the end of August, Choi received his Basic Open Water Diver certification from NASE (National Academy of Scuba Educators) and realized his dreams of becoming a diver. It was a touching moment for all who had been involved. 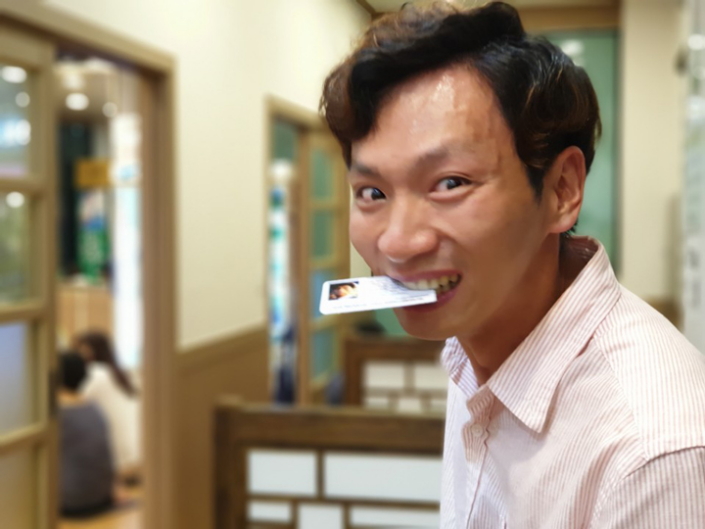 Choi continues a long photo-tradition of divers biting on their newly achieved licenses.

“I’m sure everyone here was quite worried whether Jinwon would be able to navigate in the ocean and if we would encounter any emergency situations,” recalled Club member Shin Jiyoung, of thet Foundry Manufacturing Technology Center, Device Solutions Business, Samsung Electronics. “But watching him practice in the swimming pool, we all gained confidence in his abilities. At last he’s become a real diver! I would like to extend my sincere congratulations on his achievements.”

His instructors were particularly proud of his efforts. Lee Seungha, Foundry Yield Enhancement Team, Device Solutions Business, Samsung Electronics, assisted Choi during his first open water dive and talked highly of his passion: “At first, when he stated his desire to learn how to scuba dive I was reluctant to step in, worried about the additional risk. But Choi’s perseverance moved me to try. There were difficult moments, but he did an excellent job of overcoming them and adapting to his needs. I’ve learned a lot from him, too.”

“I would like to thank the teachers and colleagues who believed in me,” said Choi. “They are the reason that I have come this far. To repay them for all they’ve done, I’d like to become a Dive Master and help those who are starting out like me.”

There was a time when Choi was resentful of his physical difference, but today he believes that physical impairments are no obstacle to whatever he sets out to achieve. For others like him, he has a heartfelt message: “I hope those like me can find the courage to challenge themselves. There may be some people who can achieve the same goal easily but, for those who have to work harder, the joy is all the sweeter. I want to be ready to help those people.”