Paper folding is an ancient art with a rich and varied history. Talented individuals can transform a single sheet of paper into shapes representing animals, plants and other objects. Often called “origami”, after the Japanese term for paper folding, the craft emerged as a pastime at different times in different places and is known by many names around the world.

To Jaeil Jeong, paper folding is known by its Korean name: jongi jeobgi*. The young Samsung employee has a particular flair for the craft; having dedicated countless hours to honing his talents, he brings the flatness of paper to life in three dimensions. 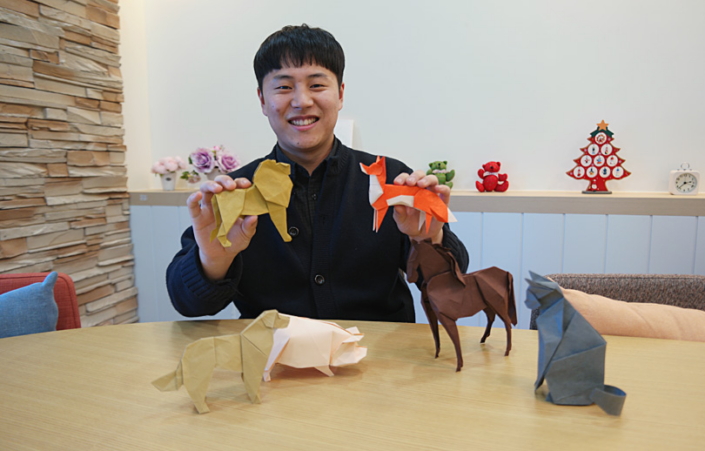 Jeong with some of his paper folding designs

Like many people, Jeong was introduced to paper folding when he was a child. It all began when his parents brought home a paper folding book and the young Jeong was quickly enthralled with the creations inside. But while many lose interest in their childhood hobbies, Jeong has continued to refine his art, even going on to design his own shapes. 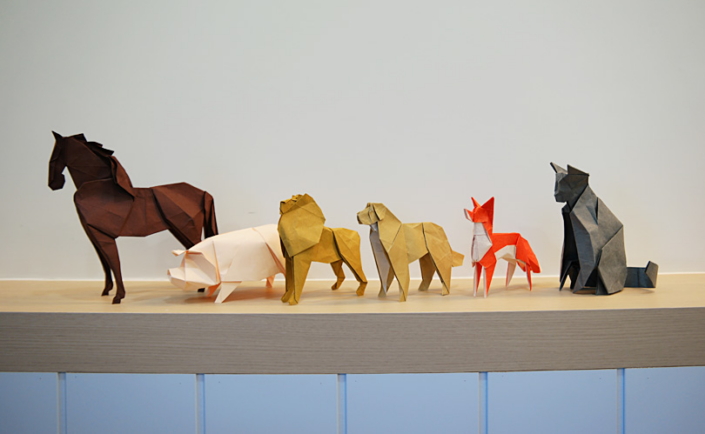 “I was in fifth grade and really into paper folding,” he remembered. “I wanted to see what other people were folding so I searched online. That was when I saw a dragon folded by a Japanese artist. From a single sheet of paper, there came out a clearly defined face, scales, and everything.”

This moment provided the impetus for Jeong to create his own designs. “I wanted to make one just like it, but I wasn’t able to find a diagram,” he explained. “So, I ended up spending days trying to figure out how to make that dragon. The way I now approach a sheet of paper for my projects all began from that experience.”

From Pastime to Prizewinner

For Jeong, paper folding is not only a fun hobby, but also a retreat from life’s complications.

“Whenever I was studying for an exam or searching for a job, I made sure I had a sheet of paper with me,” Jeong admitted. “There are moments when things don’t go your way – that’s when I take my paper out and begin to fold. My mind clears as if I were meditating. After a paper-folding session, I feel refreshed.”

Jeong’s prizewinning work, “Bull, Dynamic” was folded from one sheet of paper. Inspired by the White Bull by the late Korean artist, Lee Jung-seop, it was entered into the 2015 Global Creative Jongie Jupgi (Paper Folding) Contest

In 2015, Jeong registered for the 2015 Global Creative Jongie Jupgi (Paper Folding)* Contest, an international paper folding competition held by the Korea Paper Culture Foundation, which gave him the opportunity to showcase what he loved. After working on his project for half a year, he received a phone call.

“They didn’t tell me over the phone which prize I had received but said that it was a nice one and asked me not to miss the award ceremony,” he recollected. “I went thinking I might have got third or fourth place, so when they announced the grand prize winner and I heard my name, I was so surprised and happy.”

The contest challenged Jeong to embrace another style of paper folding. Before the contest, his folding was more “freestyle”, with fewer set rules. Jeong has since discovered the advantages of a more structured way of folding.

Left: A paper fox that Jaeil designed, playing close attention to the angles of the folds. Right: A pig that Jaeil folded “freestyle”

It’s a useful formula, making it easier for people to replicate designs exactly: “Using only these angles when you fold creates standardization in the art of paper folding,” Jeong revealed. “This achieves balance and also lets other people follow along and fold exactly how you had folded. If something is folded freestyle, when I teach others how to fold it, every version turns out looking different.”

Jeong believes there are many helpful lessons to be learned from structured paper folding: “If you fold the angle just a tiny bit wrong, the final product will not come out right. Precision is key and you need to be really focused the whole time. I now help package semiconductor chips. Semiconductor packaging is done in a world of micrometers and nanometers. The same lessons I learned through paper folding – precision, attention to detail, developing creative solutions, repeated trial and error, and learning to overcome physical constraints – apply here at Samsung as well.”

* Both Jongi Jeobgi and Jongie Jupgi refer to the same Korean term – 종이접기 – which means ‘paper folding.’ The former is how it is spelt according to the standardized Romanization of Hangeul (the Korean alphabet); the latter is how the Korea Paper Culture Foundation spells the term in English.