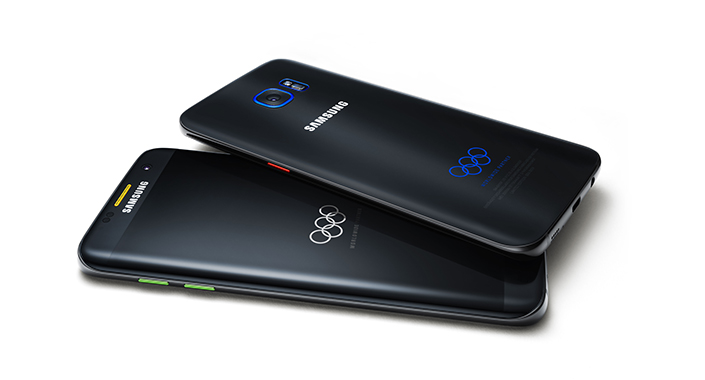 Samsung Electronics announced that the Galaxy S7 edge Olympic Games Limited Edition is available for purchase in selected regions including Brazil, the United States, China, Germany and Korea from today. In order to celebrate Rio 2016, Samsung made exactly 2,016 phones available in each nation.

As a Worldwide Olympic Partner in the Wireless Communications Equipment section, Samsung first introduced a limited Olympic Games edition device back in 1998, to tie in with the Nagano 1998 Olympic Winter Games. The Galaxy S7 edge Olympic Games Limited Edition, however, represents the first time Samsung has released a device with a themed design and even a preloaded Olympic Games-related interface and application.

It features a custom-made colorway pattern that designed in blue, red, green, yellow and black – the five colors of the Olympic Rings. There is a blue theme in the rear camera, sensors and flash, red in the power button, green in the volume button and yellow in the receiver and home key – while the device itself is a distinctive black.

The colors of the Olympic Rings are also featured in the phone’s user interface in both the home and lock screens. These can also be found in the message, dial and contact screens, as well as the notification bar.

Users can also decorate their devices with Olympic motifs, choosing from a selection of pre-loaded Rio 2016-themed wallpapers.

Samsung has also developed the new 3D Flag application ahead of the Rio 2016 Olympic Games. Users can launch the app, which comes pre-loaded on the device, to select their nation of choice. They can then display their country’s flag on the Galaxy S7 edge Olympic Games Limited Edition’s radiant screen – ideal for proud sports fans the world over.

Not only is the limited edition itself unique, the packaging of the Galaxy S7 edge Olympic Games Limited Edition is also worthy of note. Samsung has designed a practical pouch type carrier that can be used for a variety of purposes, and doubles as a memorable souvenir of Rio 2016. What is more, the practical re-usable pouch package is environmentally friendly by cutting down significantly on the kind of waste generated by many other smartphones’ packaging.

Samsung will provide a total of 12,500 Galaxy S7 edge Olympic Games Limited Edition and Gear IconX devices to athletes competing at Rio 2016 through partnership with the International Olympic Committee (IOC).