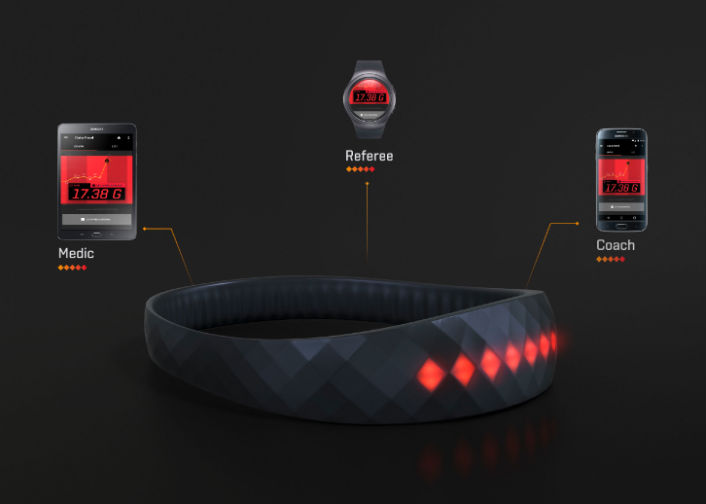 Samsung Electronics Australia has announced the creation of brainBAND, an innovative piece of wearable technology designed to facilitate research into concussion in sports. brainBAND is the work of Dr. Alan Pearce and Braden Wilson.

The prototype has been developed through Samsung’s Launching People program, an initiative that brings together two experts from different backgrounds to demonstrate how technology can investigate and help solve real challenges facing society.

Dr. Alan Pearce, a neuroscientist heavily involved in concussion research and education, and Braden Wilson, an industrial designer, worked with Samsung on the program. Together, they created a wearable technology prototype that can track impacts to the head in contact sports in real-time, with the aim to use this data to better understand concussion in sport and the ongoing impact on the brain.

Concussion is a growing societal issue in Australia with most incidences going unreported as symptoms are hard to see. Unlike traditional head gear designed to protect the head in contact sports, brainBAND is designed to gather information regarding an impact in real-time – a first in Australia.

Philip Newton, CMO, Samsung Electronics Australia commented on the program: “At Samsung, we have a strong belief in pushing the boundaries of technology and challenging the current perception of what is possible through innovation.

“This is why we are extremely proud to have helped facilitate the work of Dr. Alan Pearce and Braden Wilson to create the brainBAND prototype to aid research into concussion in sport.”

In the prototype, a specially designed headband houses sensors at the back of the head that measure the force of an impact. This information would then be relayed via an app to medics, referees and coaches, all in real-time through the use of Samsung devices.

A series of LED lights embedded in the headband indicate the level of impact of a hit: yellow, orange and red for high alert, meaning a player should be taken off the field for assessment.

All impact data will be recorded and logged so that, over time, players could obtain a more complete picture of the forces their brain has been put under.

Dr. Alan Pearce, neuroscientist and expert on concussion said: “The ultimate goal is that by understanding the dangers of repeated concussions, brainBAND may help prevent life changing injuries at every level of the game, and protect the next generation of players.”

Released today, the final episode in an eight part content series curated by Leo Burnett highlights the results achieved throughout the initiative by putting the prototype to the test on the sporting field. The video can be viewed here.

Australian football sensation and Samsung brand ambassador, Israel Folau, who was the first to trial the prototype, stated, “I think it’d be great if every player in Australia had access to this kind of technology to make contact sports safer for current and future generations.”

The collaboration with Samsung Australia has inspired Dr. Alan Pearce and Braden Wilson to continue their research and development, utilising the data learned through the Mixed Talents campaign.

Follow the journey of Dr. Alan Pearce and Braden Wilson through concept to prototype, with all eight episodes published via the website (www.samsung.com.au/launchingpeople) and continue the conversation on Facebook and Instagram using the hashtag #MixedTalents