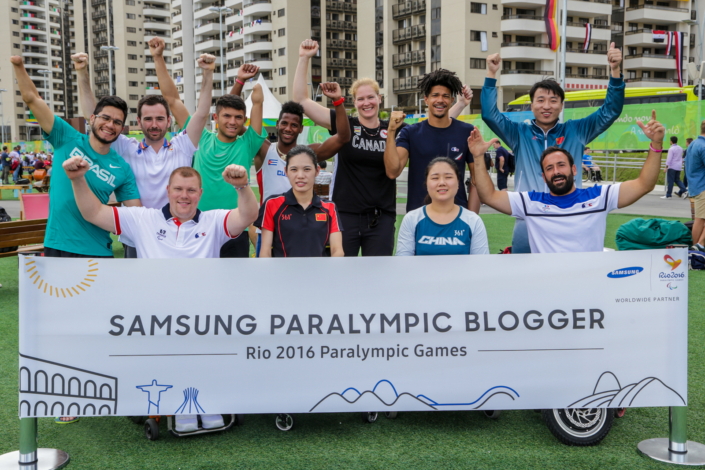 Samsung Electronics, Worldwide Partner of the International Paralympic Committee (IPC) in the Wireless Communications Equipment category, today announced its global Rio 2016 Paralympic Games campaign – a continuation of the brand’s Rio 2016 Olympic Games program – which celebrates how meaningful progress comes from daring to defy barriers. The campaign kicks off with the announcement of several on-the-ground activations including the transformation of Samsung Galaxy Studios in Rio, the Samsung Paralympic Blogger program, official application and the Whang Youn Dai Award.

“The Paralympic Games are a global movement that inspire and celebrate the spirit of progress and the human challenge,” said Younghee Lee, Executive Vice President of Global Marketing, Mobile Communications Business at Samsung Electronics. “Samsung strives to create breakthrough mobile technologies that help make the digital world more accessible for those with disabilities. We hope our Rio 2016 Paralympic Games campaign will help spark a global conversation around seeing ability over disability and enable everyone to participate in the Paralympic movement.”

In the lead-up to the Paralympic Games, Samsung has revamped its Galaxy Studios in Rio, including its flagship studio in Olympic Park, including several accessibility features, ensuring all consumers, athletes and fans are able to take part in a variety of interactive experiences. Wheelchair accessible ramps and lifts enable visitors to reach the Gear VR 4D Experience Zone, where they will experience exhilarating Olympic Sports, roller coaster rides and kayaking through water rapids via Samsung Gear VR paired with Galaxy mobile devices.

Samsung also offers unique, hands-on opportunities for visitors to experience how Samsung Accessibility technology features are designed and utilized to help those with disabilities. Galaxy Accessibility Experience Programs will include:

Get Behind the Scenes through the Samsung Paralympic Blogger Program

Samsung will once again partner with the International Paralympic Committee (IPC) to provide 30 Paralympians from countries including Brazil, United States of America, Korea, Great Britain, France, Spain, China as well as an athlete from the Independent Paralympic Athletes team the opportunity to capture and share their Rio 2016 Paralympic Games experiences with the world. As part of the Samsung Paralympic Blogger team, each of the 30 athletes will receive a Samsung Galaxy S7 and other mobile accessories to create exclusive, behind-the-scenes 360 vlogs, which will be uploaded on various digital platforms including the IPC’s YouTube channel, Samsung channels and the athletes’ social media accounts. Content will allow fans to get a firsthand glimpse of how these Paralympians are defying barriers and showcasing their tremendous athletic abilities on the world stage.

Athletes in the Paralympic Village will also be able to experience the Samsung Paralympic Bloggers in 360 by visiting a special station and viewing the content through Gear VR headsets paired with Samsung mobile phones. The stations will also contain other 360 content from key landmarks in Rio, allowing athletes to see the sites without leaving the Paralympic Village.

“We are thrilled to once again work with Samsung to share the excitement and inspiration of the Rio 2016 Paralympic Games with the world through the eyes of the Samsung Paralympic Blogger team,” said IPC President, Sir Philip Craven. “As a longstanding Worldwide Paralympic Partner, Samsung continues to bring meaningful technology to the Paralympic Movement that helps both athletes and fans connect with the Paralympic Games.”

The Rio 2016 App: Enhancing the Paralympic Games through Innovative Technology

The official application of Rio 2016, “The Rio 2016 App”, developed by Samsung in collaboration with the Rio 2016 Organizing Committee, provides athletes, fans and consumers with 24/7 updates on all of the latest Paralympic news. The app, which received more than 6 million downloads during the Rio 2016 Olympic Games period, has been updated to provide the official Paralympic Games schedule, venue and event information, results, medal counts, more real-time updates and information of Samsung’s marketing activities during the Paralympic Games.

The Rio 2016 Official Application is available for free download through the Samsung Galaxy Apps, Google Play for Android, App Store for iOS, and selected App Store in China as well as the Windows App Store.

To further support athletes who are defying barriers, Samsung will once again sponsor the Whang Youn Dai Award, which was established by the IPC to recognize Paralympians who have overcome adversities through sports and inspire and excite the world through the spirit of the Paralympic Games. During the Paralympic Games Closing Ceremony, a Samsung representative will present the award to one male and one female winner as part of a victory medal ceremony.