Samsung Electronics announced today that Brazil will roll out Samsung Pay on July 19, with major financial partners, making it the first market in South America to introduce the company’s mobile payment service.

Secure and easy to use, Samsung Pay can be used to make purchases almost anywhere¹ that debit cards or credit cards are accepted. Samsung Pay allows users to pay with their compatible Samsung smartphones at point of sale terminals, thanks to both MST (Magnetic Secure Transmission) and NFC technologies.

According to research conducted by FEBRABAN (the Federation of Brazilian Banks), mobile banking usage is on the rise in Brazil. In fact, it increased by 138 percent in 2015 with more than 11 billion bank transactions through smartphones, compared to 4.7 billion transactions in 2014.

“Samsung Pay reinforces the company’s focus to bring value to both consumers and partners by bringing innovative services to your smartphones,” said Thomas Ko, Vice President and Global Co-General Manager of Samsung Pay at Samsung Electronics. “We are always exploring creative technologies and use cases to provide consumers with an immersive and holistic mobile wallet experience.”

“We are extremely excited that Samsung Pay is now available in Brazil. As the first market in South America to roll out our mobile payment service, Brazil will pave the way for the region’s adoption of Samsung Pay,” said André Varga, Product Director of Samsung’s Mobile Devices Division in Brazil.

Samsung Pay is strategically expanding its partnership ecosystem to provide greater flexibility, access and choice for customers. Samsung Pay has partnered with major payment networks such as MasterCard and Visa to bring mobile payments to consumers. The service will launch with major issuers including Banco do Brasil, Brasil Pré-Pagos, Caixa, Porto Seguro, and Santander. Additionally, we are working with other bank partners including Banrisul, Bradesco, Nubank and Itaú-Unibanco, to make the service available to more consumers in Brazil. The list of partners eligible to offer this service is available on the website http://www.samsung.com.br/samsungpay.

More Than a Payment

A secure and easy-to-use mobile payment service, Samsung Pay can be used to make purchases almost anywhere that cards are accepted.

Samsung Pay, a mobile payment service from Samsung Electronics, is simple, safe and works almost anywhere3 you can swipe or tap your card. Combining NFC with Samsung’s proprietary MST technologies, Samsung Pay provides consumers a way to pay almost anywhere you can swipe or tap a card at millions of merchant locations. Samsung continues to strategically expand its partnership ecosystem for Samsung Pay to provide greater flexibility, access, and choice for customers while enabling an easy and safe payment experience. Samsung Pay is compatible with select cards and Samsung devices, and leading wireless providers. Please visit www.samsung.com/pay to learn more.

1Availability almost anywhere is based on compatibility of Samsung Pay on MST and/or NFC payment terminals, with some supported for use only after software upgrades. Samsung Pay is exclusive to selected Samsung Galaxy smartphones only, and available across all participating payment networks, banks, and merchants. Availability may vary, please check for updates.

2Only with NFC ; MST is not supported.

3Some card reader terminals may require software updates to be compatible with Samsung Pay. 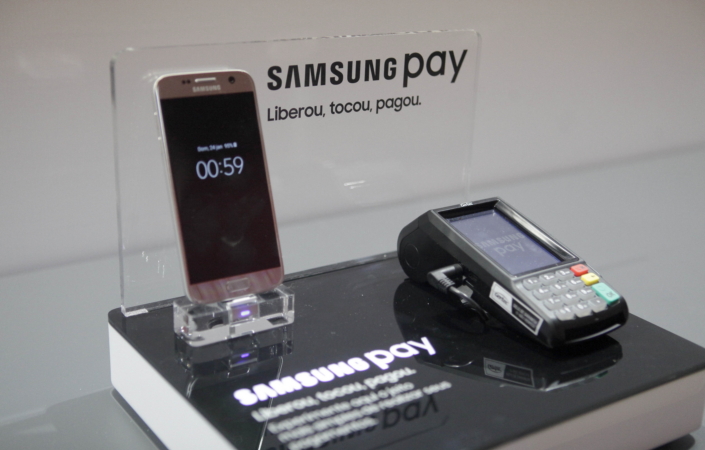 Attandees checks out the Samsung Pay during the launching event in the Ibirapuera Auditorium, Sao Paulo, Brazil.