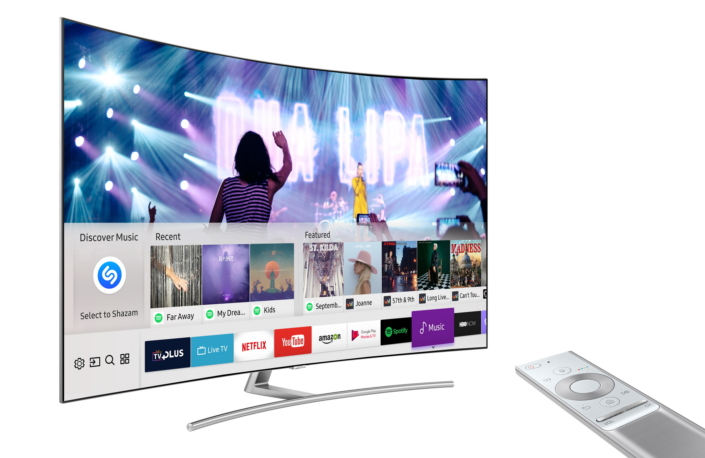 Samsung Electronics announced today the release of a new update for its 2017 Smart TV platform to support Shazam, one of the world’s most popular music apps. Shazam provides users with a customizable service and is available on Smart Hub of 2017 Samsung Smart TVs.

“We are thrilled to provide our Smart TV users with the ultimate music service through our partnership with Shazam,” said Hee-man Lee, Vice President of the Visual Display Business at Samsung Electronics. “Smart TV capabilities are constantly evolving with the addition of innovative apps, and we are committed to continually delivering advanced technology through partnerships with highly capable software companies like Shazam.”

Shazam grants Smart TV viewers the ability to identify songs that are playing in TV shows or films easily and quickly. With a single click, users are able to access song titles, artists, lyrics and albums while watching content, whether it’s live TV or content delivered over HDMI (High Definition Multimedia Interface).

Users can also utilize voice recognition technology in the Samsung One Remote to identify songs. By speaking into the remote and asking, “What is this song?”, Shazam instantly provides information about the music being played.

Additionally, Shazam offers viewers the option to stream the music they identify and creates playlists that can be accessed at any time without having to run an external app. Samsung’s Smart Hub provides music content through streaming partners, including Spotify, Napster and Deezer, for those who subscribe to these services.

“We are excited to integrate Shazam’s functionality with another medium that’s enjoyed by so many people around the world, and we couldn’t think of a more fitting partner than Samsung,” said Fabio Santini, Shazam Chief Product Officer. “Smart TVs felt like a natural evolution for the Shazam experience, and Samsung has always been a leading innovator in the space. We can’t wait for viewers and Shazam users alike to try this new feature.”

Shazam is one of the most popular music-discovery apps across the globe, reaching hundreds of millions of mobile users. Shazam music service is available in Samsung’s Smart Hub in Korea, the U.S., the U.K., France and Germany.

Shazam is one of the most popular apps of all time, used by hundreds of millions of people to magically connect to the world around them. Building on its pioneering leadership in music identification, Shazam now helps people discover, interact with, and share audio, video, printed or augmented reality content—and lets music fans follow their favorite artists to share in the thrill of discovery. The app has been downloaded over one billion times, in over 190 countries, and users Shazam over 20 million times each day. For more information, please visit www.shazam.com.