Seoul After Sunset: The Galaxy S10+’s Night Mode, In Pictures

There’s something special about the way cities look in the nighttime. Once the day draws to an end, our favorite cityscapes come alive and we often find ourselves itching to capture the scenes in front of us with our smartphones. But without a camera able to take on the nuances and challenges of nighttime photography, this undertaking can be a fruitless one.

The Galaxy S10+’s Night Mode is the perfect tool for capturing photos after the sun has gone down. Accessible from the Camera app, Night Mode can be manually toggled on and off whenever you wish to use it in the Camera app’s sliding menu. Compared with photos taken without it switched on, Night Mode minimizes the noise from a dark environment to enhance a photo’s details and corrects colors, along with other image qualities, to make the resulting low-light shots more vivid. 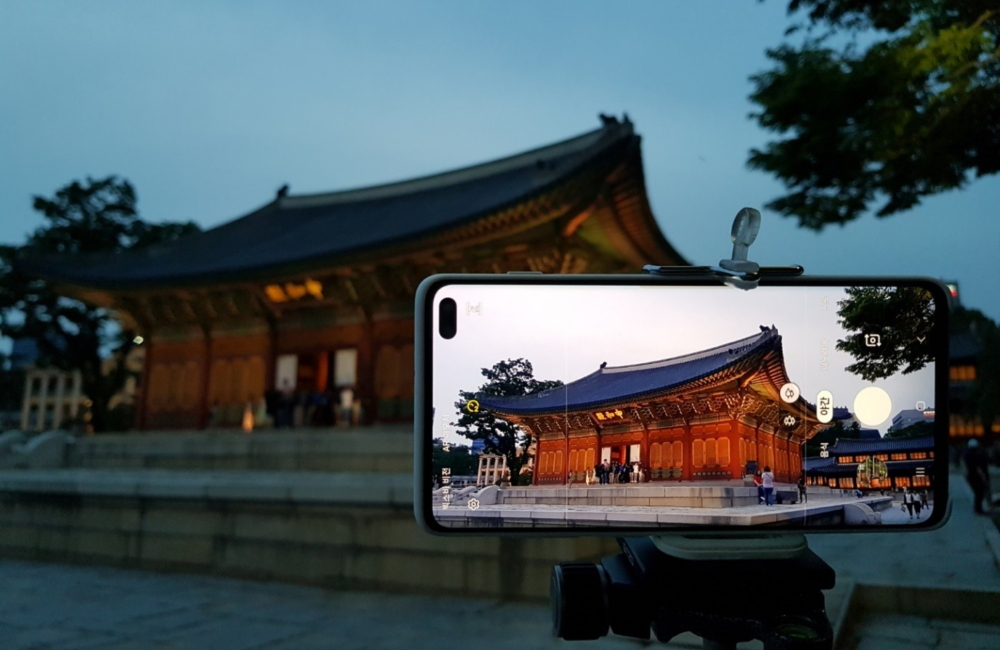 Samsung Newsroom traveled to some of the top landmarks around Seoul after dark to see how the Galaxy S10+’s Night Mode can bring out every detail in a nighttime scene, even in low light conditions.

A Palace for All Hours of the Day

Deoksu Palace is one of Seoul’s four ancient palaces, drawing visitors keen to take in its striking architecture day and night.

Junghwajeon, one of the royal courts of Deoksu Palace, was built in 1902 and has a remarkable golden exterior featuring intricate patterns, colors and textures that are not easy to capture at night. However, by simply turning on Night Mode on the Galaxy S10+, all the courts’ details come to life, thanks to Night Mode’s intelligent gradation adjustment that brings vibrancy to pictures taken after dark. Try using a tripod to level the top and bottom of the frame for an ever better shot of the ancient palace that captures every striking detail.

While the Galaxy range’s Night Mode function previously only automatically activated when conditions were very dark (below 1 lux), the Galaxy S10+’s Night Mode now allows users to make the most out of it as they can manually switch it on or off and use it for lighter nighttime scenes.

Seoul’s Gwanghwamun Plaza, often bustling with pedestrians, is a place where the traditional and the modern come together. Neon lights from the buildings that flag it, along with the bright lights of passing cars, make up a vibrant patchwork of color during the nighttime, but can easily drown out the statues at the Plaza’s heart in pictures.

Thanks to the Galaxy S10+’s Night Mode, the two statues that sit right at the heart of downtown Seoul (Admiral Yi Sun-sin, first picture, Sejong the Great, second picture) can be captured without any compromise to the eclectic lighting of their surroundings. Night Mode lowers camera sensitivity and decreases shutter speed, capturing bright lighting well despite the high contrast. Paired with the Ultra Wide lens of the Galaxy S10 line, Night Mode provides after-dark shots that can capture everything in the camera’s field of vision.

Naksan Park in northern Seoul features vistas that include a striking contrast between the area’s historic fortress wall, idyllic mountain views and the nighttime bustle of downtown Seoul.

But Galaxy S10+ users need not worry about losing any detail when capturing close (first picture) or wide (second picture) shots of scenes with such subject contrast. Without Night Mode switched on, distinct features of the landscape would be lost, with city lights obscuring lower contrast areas such as the striking mountainous terrains in the far distance. But just by switching Night Mode on, you can maximize the visibility of your shot thanks to its intelligent noise reduction that balances different areas of contrast and light to cleanly bring out a shot’s every aspect – even in low-light conditions.

Sunset By the River

The Hangang Riverside Park lights up as the sun goes down, and the variety of different lighting attractions on display reflect in the Han River to often dazzling effect. Yet capturing this display of light from a variety of different light sources, from the natural light of the fading sun to the colorful façade of the Hangang Floating Islands, can present a challenge when looking to achieve balance in twilight pictures.

With the Galaxy S10+’s Night Mode, pictures emerge more vibrantly thanks to its auto color-correcting software, resulting in bright and clean shots that carefully negotiate all the different sources of light on offer. For an even more vivid take, users can alter Night Mode’s settings for lower exposure correction to capitalize on the darker aspects of a scene – without losing any of the color or detail.

Seoul’s Namsan Tower sits an impressive 479.7 meters above sea level, offering visitors a scenic, near-panoramic view of the city which comes to life as the sun sets.

One of Namsan Tower’s best offerings to visitors is the opportunity it presents for you to capture shots of the sprawling city that lies below it – as well as of the striking tower itself against a diverse backdrop. But cloudy weather conditions add more disruptive photographic noise to pictures that obscures the details of a shot, especially for long-distance vistas.

Just by sliding Night Mode on in the Camera app, Galaxy S10+ users can take shots that bring out the vivid colors of this cityscape at night thanks to Night Mode’s intelligent noise reduction capabilities. Whether you are looking to photograph a landmark (first picture) or achieve a birds-eye view shot of a city (second picture), the Galaxy S10+’s Night Mode optimizes color and contrast balance to striking effect – even in less-than-ideal weather conditions.