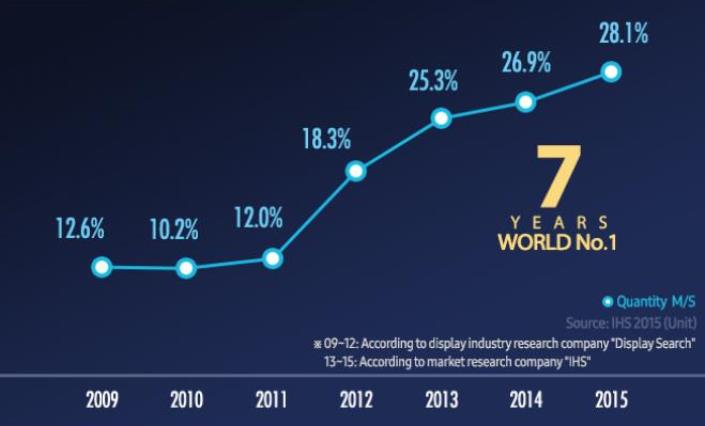 Samsung has been the world’s top display and signage company for more than seven years now, thanks to its strong lineup of leading displays and content management software. Starting in 2009 when Samsung Signage took 12.6 percent of the world market, the company has continued growing, reaching a record 28.1 percent last year.

Let’s take a look at some of the biggest innovations and most popular products Samsung has released since becoming the market leader in 2009. 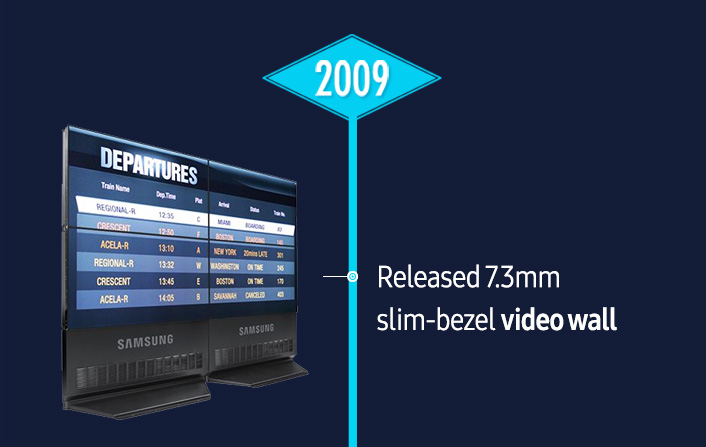 Video walls can be a great way to command customer attention, grouping together a series of screens to make a big display. And with the slimmer bezel—just 7.3 mm separating two screens when they are tiled together—Samsung improved the effect, so people can focus their attention on the screens, not the device and its edges. 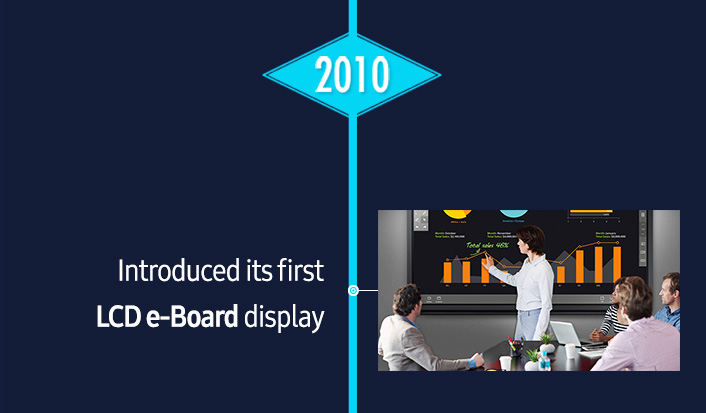 Samsung’s e-Board displays turned signage smart, adding a touch-screen element to the high-quality screens so consumers can directly interact with content. Using the MagicIWB software package, companies gained the ability to create dynamic programming and even write content directly onto the screen. 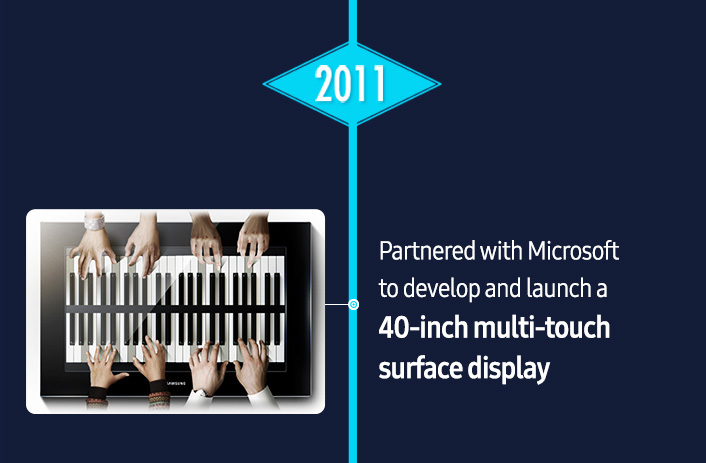 Together with Microsoft, Samsung released the SUR40, a 40-inch multi-touch screen table display. This innovative and unconventional display won Samsung a Best of What’s New award from the influential magazine Popular Science. These panels were able to detect more than 50 touch points simultaneously, giving them unprecedented levels of functionality. 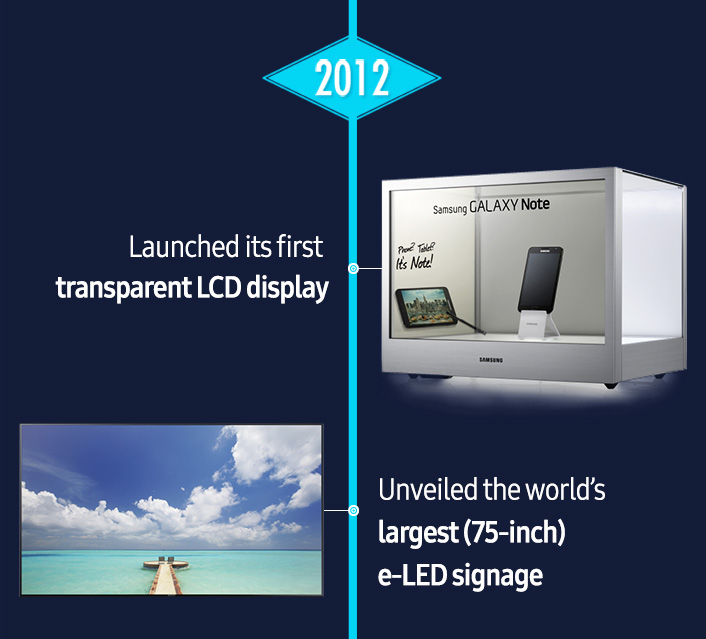 Transparent displays were a major breakthrough, especially for retail, where the technology promised to combine the engagement of regular signage with the ability to show real-world, physical items. Available in 22 inches and 46 inches, transparent LCD displays weren’t just futuristic—they were a whole new way for retailers to interact with the public. 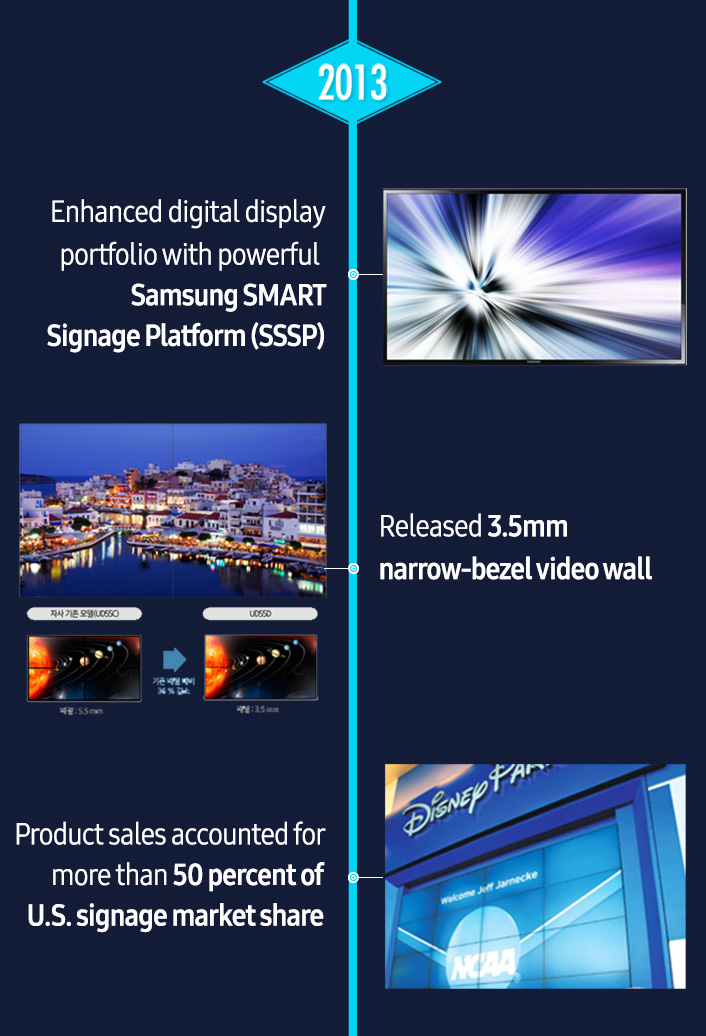 Powered by a System on a Chip (SOC) semiconductor, the Samsung SMART Signage Platform (SSSP) was a major leap forward for the display industry. The open-source, all-in-one platform eliminates the need for an external player, letting businesses manage their displays and create content with a system that’s intuitive, convenient and low-cost.

Not content with its previous 7.3 mm bezel displays, Samsung continued to refine and improve its screens until the bezel was reduced to 3.5mm. Now, video walls could made even better, with the space between displays continuing to shrink.

Samsung passed a major milestone in 2013, as its share of the signage market in the United States grew past 50 percent. 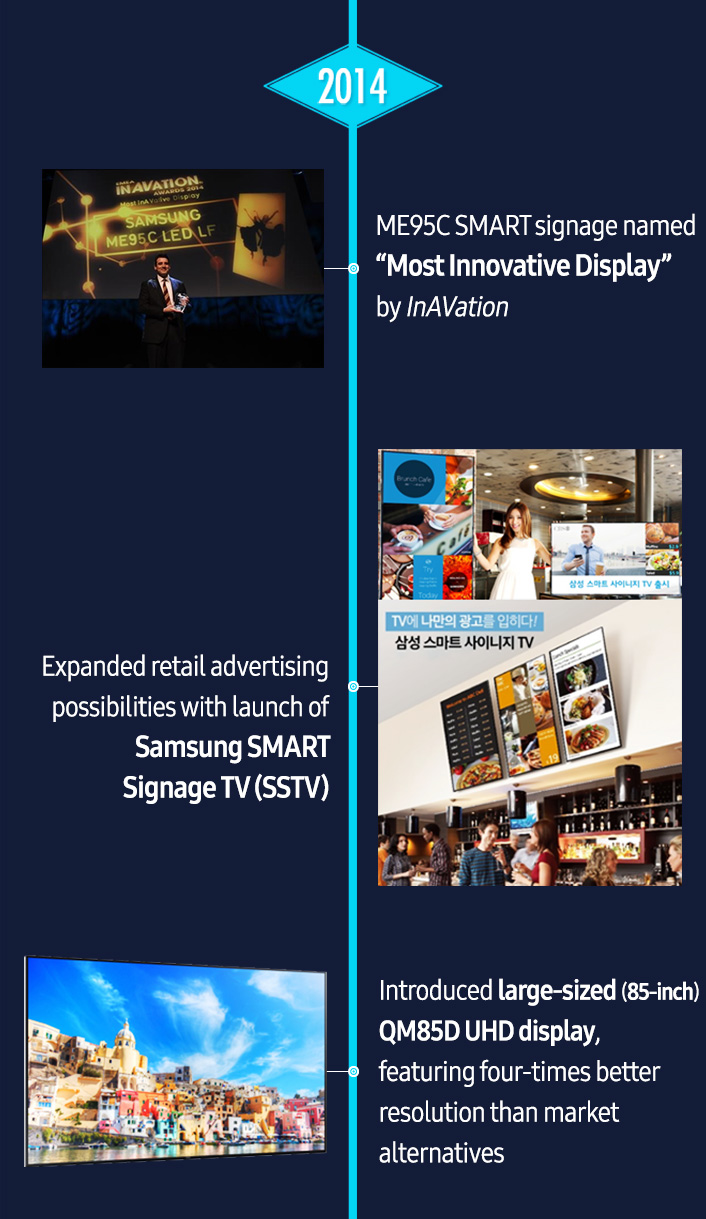 InAVate magazine named Samsung’s ME95C SMART Signage the Most Innovated Display at the 2014 InAVation Awards. In a world where size matters, the ME95C offered an attention-grabbing 95” display with an excellent full high-definition (FHD) resolution while the edge-lit LED technology allowed for a lightweight form factor that took up minimal space.

Samsung SMART Signage TV (SSTV) was designed to bring high quality TV options to small businesses. Coming in 40 inches and 48 inches, SSTV combined the informational and promotional benefits of digital display by sharing various customized in-store promotions and business content, along with the entertainment value of live TV for business customers – all at the same time.

With the introduction of UHD displays, Samsung brought four times the resolution of regular HD displays into its crystal-clear, 85-inch models, helping businesses make their displays more impactful and eye-catching than ever. Samsung QMD Series SMART Signage displays offered UHD resolution on a commercial-grade glossy panel that can be operated reliably for up to 16 hours/day, 7 days/week. 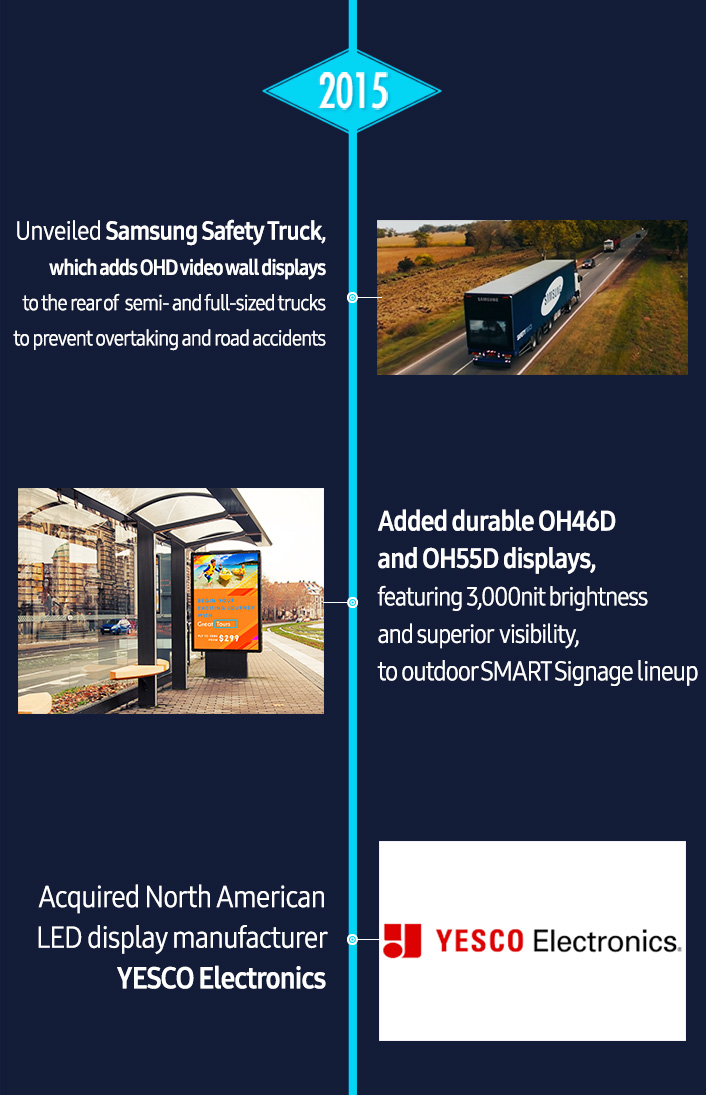 By placing cameras on the front of a truck and four large monitors on the back, drivers following large trucks would able to see the road ahead, greatly improving safety. This concept won Samsung eight prizes at the 2015 Clio Awards and also seven Cannes Lions in 2015 including the Titanium Lion in the Titanium and Integrated category.

These new displays brought incredibly brightness—3,000 nit—making them ideal for outdoor usage, clearly visible even on bright, sunny days. They are also rugged, able to operate in temperatures ranging from -30 degrees Celsius to 50 degrees Celsius.

The acquisition of the U.S. display manufacturer YESCO Electronics added to Samsung’s capacity in the LED signage market, boosting its ability to supply displays for large outdoor venues, like sporting stadiums.

Transparent display technology has continued to advance since Samsung introduced its transparent LCD solutions in 2012. But now, at the BMW Driving Center in Korea, six 55-inch transparent OLED displays have been put together to present information and special features to customers in a unique manner.

The latest UHF-E (Extreme Narrow Bezel) video wall has bezels that are just 0.9~1.05 mm on the upper and left sides, and 0.5mm on the lower and right sides. From 7.4mm in 2009 to 3.5mm in 2013 to 1.6~1.7mm in 2016, Samsung further improved its narrow bezel technology to allow business customers can keep audiences focused on rich visual content rather than on the display itself.

Samsung’s innovative OHD series of SMART Signage was recognized for their robustness and brightness—as well as better content management systems than ever—winning the AV Display Innovation of the Year award in 2016 from AV News.

The scoreboard at the SK Wyverns Munhak Baseball Stadium in Incheon, Korea, recently installed a new scoreboard—a mammoth 64-meter by 18-meter LED scoreboard built by Samsung. More than just a giant screen, Samsung is also providing the installation, operating systems, and maintenance, showing off its extensive capacity when it comes to commercial signage.

Using the Samsung 55-inch mirror display, the Leekaja Hairbis hair salon in Seoul is providing a unique styling option for customers. In the first commercial installation of mirror displays, customers can look at their reflection, but seen with a variety of hairstyles and looks, so they can better understand their styling options.