The ability to see something on a different scale often offers a new perspective. Launched with the Galaxy S8 and S8+ and now available with the Galaxy Note8, Samsung DeX* lets users use their smartphone like a desktop by providing a seamless, mobile to desktop transition. Now, users have the opportunity to enjoy the best of both worlds in an ever-expanding ecosystem of partnerships, opening up new possibilities for coding, entertainment and productivity.

Out and About with Linux on Galaxy

At last, developers themselves are able to experience a truly mobile development environment.

Linux on Galaxy, an app demonstrated during SDC 2017 in San Francisco, is designed to free developers from their desks by providing a Linux OS environment for their Galaxy smartphone: anywhere, anytime, on-the-move. Smartphones with Linux on Galaxy are capable of having multiple operating systems running at the same time, so developers have the ability to work with their Linux-based distributions of choice on their mobile device, without restrictions. As well as using the Android OS, they can open the app to run any software they require in a Linux OS environment, giving developers the flexibility to choose.

Samsung DeX complements the conventional mobile experience. In the world of entertainment, Samsung DeX now offers support for even more mobile games and video streaming services, so users can watch the action come to life on a larger screen. 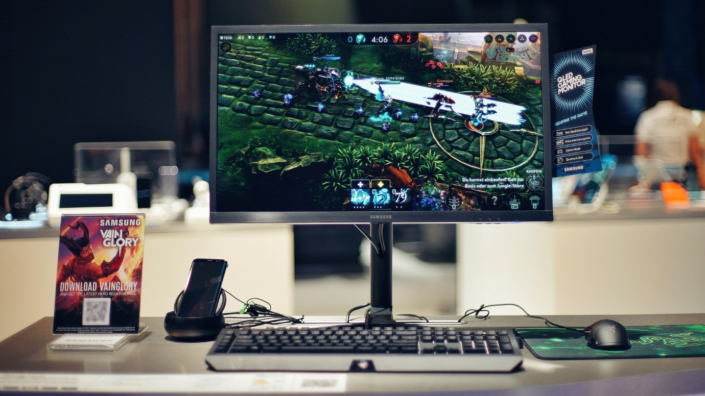 Samsung’s partnerships with major video game developers such as Super Evil Megacorp’s Vainglory, Game Insight’s Survival Arena, Eric Froemling’s BombSquad and Netmarble’s Lineage 2 Revolution present popular mobile games on the immersive desktop setting through the Samsung Game Launcher app, with a keyboard and mouse for easier gameplay. This allows players to move from mobile to desktop, and back again, without disrupting their gaming experience. In addition, new titles – including Lineage 2 Revolution and Nexon’s AxE – are beginning to support Vulkan API in increasing numbers. The upcoming “mobile title” Square Enix FINAL FANTASY XV POCKET EDITION has been optimized for both Vulkan and DeX, pushing the boundaries of mobile gaming.

With Twitch, users of the video streaming service are provided with a better multitasking experience and can resize the window and play video while running other apps via Samsung DeX.

Likewise, Samsung DeX enables a better collaboration with video conferencing from even more services such as Zoom, BlueJeans and GoToMeeting. Video conferencing has been made simpler with a seamless docking-undocking experience, support for screen and document sharing, and multitasking capabilities that allow the user to stay in the call while taking notes or sending email. 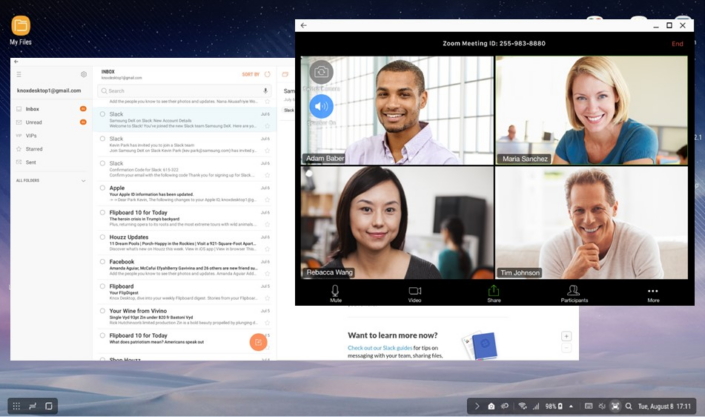 With the Galaxy Note8, the new All Apps user interface offers users a full view of up to 36 of their mobile apps at once, which is an increase from previous view of 25 apps. The enhanced UI makes app access and search more convenient, allowing users to identify and utilize apps faster.

As Samsung continues to expand its partner ecosystem with third-party developers and strives to broaden the use of Linux on its smartphone, the service’s ecosystem will continue to grow organically, offering a wider range of Samsung DeX-optimized apps, features and experiences for Galaxy users across business and entertainment.

**To find out when Linux on Galaxy will become available please sign up at: http://seap.samsung.com/linux-on-galaxy