[Interview] One Year of Samsung Pay: A Milestone for Mobile Payments

Four members of the team behind Samsung Pay discuss the service’s first year achievements, as well as what we can expect from it in the near future. 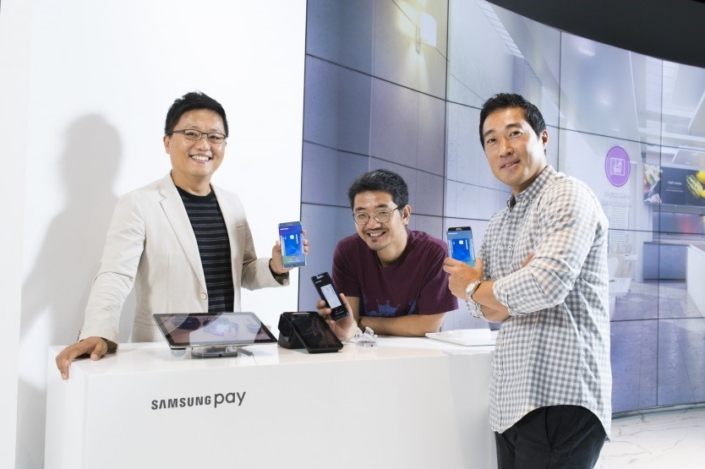 Q. What has been the general response to Samsung Pay since its initial launch?

Jake Kim: Over the past year, we’ve launched Samsung Pay in seven countries, and the response has been overwhelming. One of the most common remarks we hear from consumers is that they’re satisfied with the fact that they can leave their wallet at home, since Samsung Pay works almost anywhere.

A typical merchant’s first experience with Samsung Pay starts with denial. “Sorry, we don’t accept mobile payments.” Then it turns into disbelief. “Did it really work?” Which then leads to an enthusiastic “Wow!” when they realize Samsung Pay works on their legacy point-of-sale (POS) terminals without any additional steps in the transaction process.

Q. What were the challenges you experienced when launching Samsung Pay?

Seunghan Dan: Competition is very fierce in the current mobile wallet market. Our original equipment manufacturer (OEM) competitors aren’t the only ones out there; many issuing banks and even telecom operators are investing a lot to launch their own mobile wallets. Building strong partnerships will be key to staying ahead. We’re constantly coming up with proposals that could mutually benefit both parties.

Jake Kim: Expanding Samsung Pay hasn’t exactly been a “copy and paste” process. We’ve found that many factors influence the payment experience including the payment infrastructure, regulatory framework and user preferences, which can vary from one country to the next. Maintaining consistency while adapting to each market has been one of our biggest challenges.

Sunghan Kim: One of the challenges for the UX team was to come up with a way to make Samsung Pay an easier and faster method of offline payment than cash and credit cards—consumers’ typical methods of payment. We also wanted to create an outstanding digital wallet experience while making sure it would be safer and more convenient. The second challenge is an ongoing one—to ensure Samsung Pay maintains it simplicity as we continue to add more value-added features and functionality.

Q. Are there any moments that were particularly memorable during this whole process?

Sunghan Kim: When we started, we established a task force of UX designers from various services. We spent weeks creating various user experience solutions and ideas for the first version of Samsung Pay. While brainstorming, our entire work space was completely covered in design proposals. During this time, my team members and I were excited about introducing a totally new digital wallet experience, but also nervous about doing something that had never been done before.

Jin Lim: For me, the U.S. service launch was especially memorable. I remember the day before we went live with the service in the U.S. All our team members were running around like crazy while preparing to open the service right before midnight. I will never forget seeing the traffic surge on our monitoring dashboard and realizing that those were actual users coming into system. 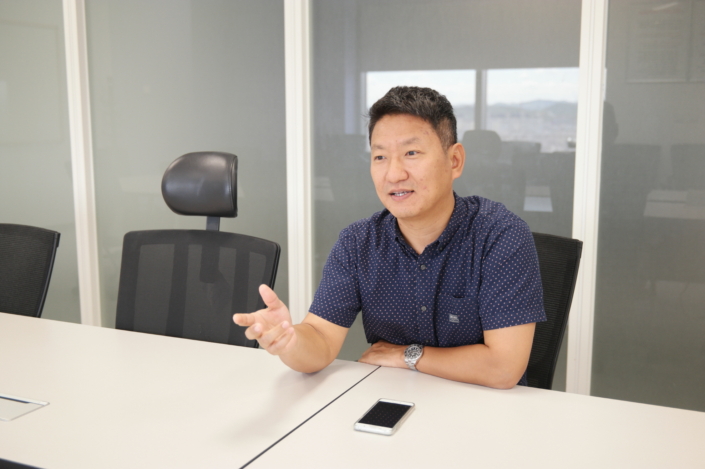 Q. Which markets have been the quickest to adopt the service?

Jin Lim: I think that the Korean market has been the quickest to adopt, partially because Korea, like many other Asian countries, is especially open to experimenting with new technologies. Also, there was a large number of Korean issuers who wanted to participate in the Samsung Pay launch, which helped to ensure that users would have at least one card that could be enrolled in the service. As a result, we had explosive adoption and usage growth in the first three months, which in turn, eventually convinced other issuers to partner with Samsung Pay.

Seunghan Dan: Singapore, a country with one of the most advanced financial infrastructures in the region, has been very quick to adopt as well. Competition there is fierce. The good thing, though, is that most Singaporeans know about the digital wallet and how to use it. We see this as an opportunity to quickly expand our value-added services in Singapore.

Q. Are there any advantages to Samsung Pay that are a result of the company’s position as a hardware manufacturer?

Seunghan Dan: Sure. Thanks to our MST technology, Samsung Pay is the only mobile wallet that can be accepted almost everywhere, whether the PoS terminal is contactless or not.

Jin Lim: Security is also another advantage. Samsung Knox and biometric authentication at the hardware level such as fingerprint and iris scanning really sets us apart from a competitive standpoint.

Sunghan Kim: The Samsung Pay UX team wanted to make the device itself (rather than an app) a digital wallet so the user could launch the service immediately. Collaboration with the device UX team made this possible. As a result, Samsung Pay can be launched with a single swipe-up action from the home button even while in sleep mode. It provides convenience to users and also gives Samsung Pay a competitive edge when it comes to usability.

Q. What can we expect from Samsung Pay in the near future?

Jin Lim: From an engineering standpoint, we are continuously working to improve Samsung Pay’s infrastructure architecture to increase service availability from 99.9 percent to 99.99 percent. We’re doing this by implementing a data center model which enables our service to be more reliable.

Jake Kim: We need to build on the momentum we’ve created and continue to build up more added value services such as membership, loyalty and transportation cards to achieve a more complete digital wallet experience. We’re also going to focus on online payment services and partnerships, as more and more customers are now shopping online.