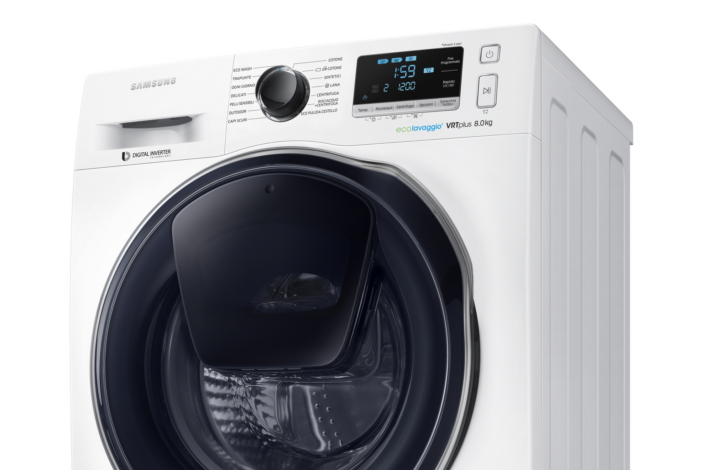 Samsung Electronics today announced the addition of two new AddWash lineups – the Washer-Dryer Combo and the Slim, which will be displayed at IFA 2016. The move, reflecting strong consumer demand for the original AddWash WW8500 introduced last year at IFA 2015, aims to offer consumers a wider range of options to utilize and enjoy the innovative AddWash feature.

The original AddWash feature helped redefine the task of doing laundry, recognizing the common habit of forgetting to put in an item from a stray piece of clothing to extra softener into a load. Samsung AddWash continues to gain favorable reviews and multiple awards for innovation from global media. AddWash users are showing the same level of enthusiasm these awards present. According to new research conducted by Samsung shows that 92% of users love that the AddWash Door lets them add items in the middle of a cycle. 97% of users think it provides great washing performance and 98% are very satisfied with AddWash.*

“The AddWash feature continues to make a strong impression on consumers here in Europe and we are very pleased to be offering it across a wider variety of models,” said BS Seo, Executive Vice President at Samsung Electronics. “It is a unique and convenient solution for modern and busy families, and when you pair it with our other industry-leading washing machine features and innovations, it is a combination that cannot be beat.”

The new AddWash Washer-Dryer Combo lineup has two variants, the WD6500K and the WD5500K. The standout AddWash feature is coupled with Air Wash, common to both models, which uses only heated warm air to deodorize and sanitize clothes. That saves them from the wear and tear of a standard load, freshening up laundry without water or detergents. The AddDoor can also be used during a drying cycle. It is perfect for items that require dry cleaning, helping families save money and cut down on expensive bills.

The WD6500K comes with a 9KG capacity and Samsung’s highly acclaimed Ecobubble technology, which lets families clean effectively even at low temperatures. It accelerates the process of turning detergent into bubbles, quickly penetrating fabric and easily removing dirt while saving energy and being gentler on clothes. The Combo model also boasts a feature called Super Speed, which is a more efficient way of washing everyday laundry. It shortens rinsing time with a Speed Spray that shoots powerful jets of water and accelerates the spin speed based on the wash load to quickly spin-dry clothes. One load can be completed in just 59 minutes. The WD5500K comes in 9KG, 8KG and 7KG variants and also features Ecobubble and Bubble Soak.

The Slim lineup has three variants, the WW6500K, WW5500K, and WW4500K. All feature the slimmest profile in the industry while offering a range of capacities: 6KG, 7KG, 8KG, and 9KG, to fit modern urban lifestyles which put a premium on available indoor space. Each also comes with Ecobubble technology and Bubble Soak, which adds an extra phase to a normal washing cycle to thoroughly soak dirty clothes in active bubbles, loosening dirt and stains to prepare them to be removed much more effectively.

*Based on 2016 Survey of Samsung AddWash owners in France(N=149). The survey conducted by Samsung.

**All functionality, features, specifications and other product information provided in this document including, but not limited to, the benefits, design, pricing, components, performance, availability, and capabilities of the product are subject to change without notice or obligation.