Samsung Pay Reaches One Year Anniversary in the United States

Samsung Pay—the most widely accepted mobile payment system—celebrates its first anniversary in the U.S., building on the digital wallet’s record of success. In just one year, Samsung Pay has driven innovation, adding features like support for membership and gift cards and coupons, allowing users to slim down their wallets. Samsung Pay now supports over 500 banks and credit unions, representing over 80 percent of the debit and credit card market in the U.S. Samsung Pay also now offers new features including an in-app coupon service to search, store and redeem coupons, as well as a new cloud storage feature to restore membership, gift and Samsung Reward cards whenever they sign into a new device.

“Since its launch a year ago, Samsung Pay has redefined what consumers can expect from a digital wallet,” said Nana Murugesan, VP/GM of Service and New Business at Samsung Electronics America. “Samsung Pay has led the way for mobile payments in the U.S. by providing our customers innovative services they can use almost anywhere they shop. Our impressive growth shows that we are closer than ever to a world without wallets. We are excited to roll out more services and features that will allow the user experience and build enthusiasm for a safer, smarter and better digital wallet.”

Samsung Pay continues to add features and services to make it a holistic digital wallet that extends beyond debit and credit cards. In partnership with Quotient Technology Inc. [NYSE: QUOT] formerly Coupons.com Incorporated, a leading digital promotions platform, Samsung Pay offers users the ability to search, save and redeem coupons at select retailers directly within the app.

At any time, users can upload a membership or loyalty card from select retailers within Quotient’s partner network; including many of their favorite grocery, drug, dollar and other retailers. Users then view hundreds of offers and save the coupons they’d like to use, and, because the coupons are linked to a membership account, the savings will automatically be applied when they check-out with Samsung Pay.

With Samsung Pay, users can redeem gift cards from hundreds of the nation’s largest retailers, as well as earn rewards through merchants’ membership programs. As part of today’s feature announcement, Samsung Pay now also offers users with a convenient cloud storage feature to restore membership, gift, and Samsung Reward cards whenever they sign into a new device.

When Samsung Pay launched in the U.S. a year ago, it supported cards from four banks. Today, Samsung Pay works with over 500 banks nationwide covering over 80 percent of all debit and credit cards in the U.S. Samsung Pay continues to add banking and merchant partners in order to bring the simple, secure digital wallet experience to more customers across the country.* 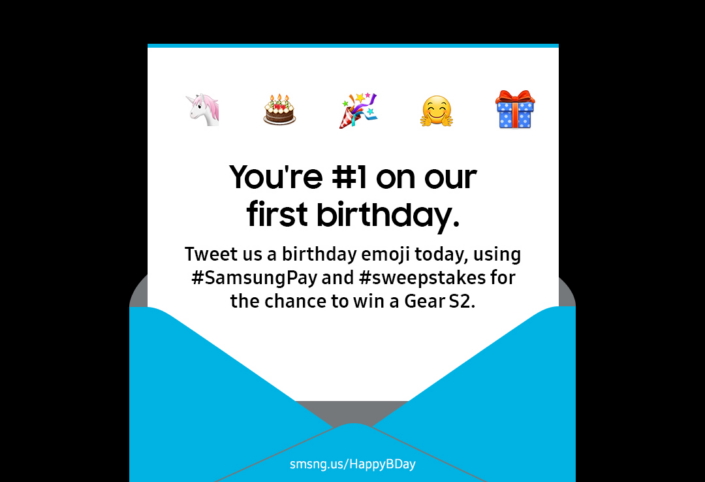 To mark its one-year anniversary, Samsung Pay is offering users over $100,000 in prizes on 9/28. As part of the celebration, 365 lucky winners will receive a Gear S2, which now works with Samsung Pay. Currently in beta, Samsung Pay on Gear S2 works using Near Field Communication (NFC) technology allowing users to make a payment at any NFC terminal. Full entry details and rules can be found here: http://samsungpaybirthday.dja.com.

More Than a Payment Service

Samsung Pay, a secure and easy-to-use mobile payment service, can be used to make purchases nearly everywhere cards are accepted.