The Gear Fit2 GPS sports band’s latest software update is packed with key enhancements that bring new levels of precision and convenience to the fitness-tracking experience. Users will be notified of the FOTA (firmware over-the-air) update in their smartphone’s Quick Panel as it becomes available in their region, and will be able to install it on their device via the Samsung Gear app beginning on November 23.

With the Gear Fit2’s new Auto Pause feature, the device will recognize when a user who is engaging in a cardiovascular activity such as running or cycling suddenly stops—say, for a traffic light, or simply to take a break—and will pause its fitness-tracking functions accordingly.

As the Gear Fit2 recognizes exercise status automatically, users are not required to interact with the device in order to pause or resume their workout. Rather, as soon as the user resumes the exercise, the Gear Fit2 will register the change and pick up tracking functions right where he or she left off.

The update also expands the number of exercises the Gear Fit2 is capable of automatically registering. Already recognized repetitive-motion exercises such as running, walking and elliptical and rowing sessions are now joined by a diverse range of fun, high-intensity activities such as basketball, table tennis, badminton, dancing and soccer.

The Gear Fit2 tracks these activities with its motion sensor, and whenever a user engages in one for more than 10 minutes, it logs the session as a “Dynamic Workout”. The device is capable of recording several other common and engaging fitness activities as well, providing users with more freedom—and motivation—to optimize their exercise in the manner they prefer.

Because every step, set and rep counts when pursuing one’s fitness goals, the Gear Fit2’s new Set feature streamlines the management of repetition-based exercises such as crunches, lunges, squats and star jumps—an activity for which support was added with the update—to help users train more effectively. 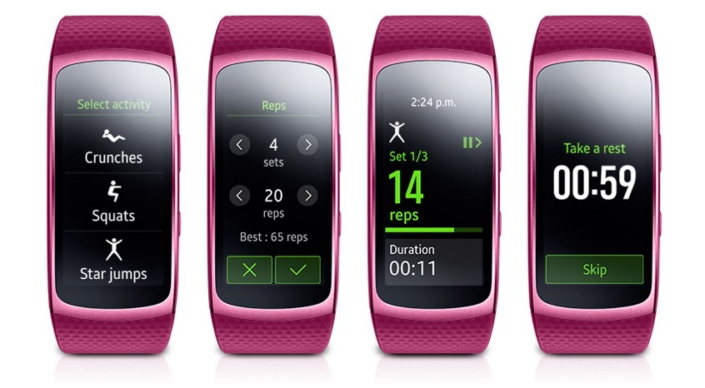 Users can input their desired number of repetitions and sets per exercise and the Gear Fit2 will start tallying their progress as soon as they begin. Moreover, because getting adequate rest between sets is key for efficient training, the device will display appropriate break intervals between sets to help users catch their breath and maximize their effort.