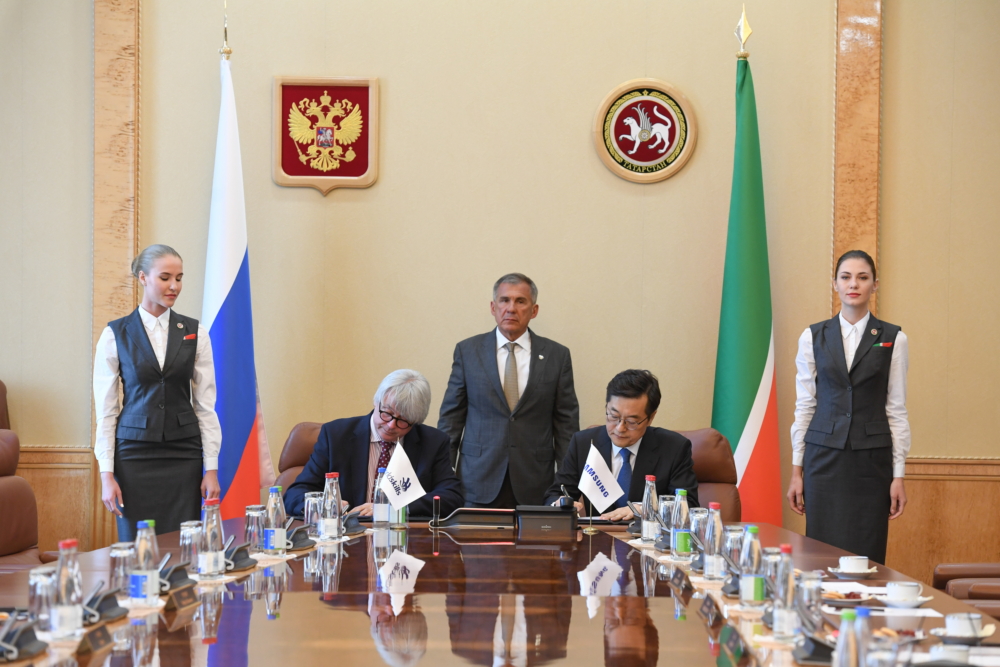 On May 20 in Kazan, Russia, Simon Bartley, President of WorldSkills International (seated left), and DS Jang, Secretary General of Samsung Skills at Samsung Electronics, are taking part in a signing ceremony announcing Samsung’s sponsorship of WorldSkills Kazan 2019. Standing behind them is Rustam Nurgalievich Minnikhanov, President of the Republic of Tatarstan, of which Kazan is the capital.

Every other year, hundreds of talented young people from around the world gather to compete in the WorldSkills Competition – also known as the “World Championships of Skills.” This year’s competition, held from August 22 to 27 in Kazan, Russia, will mark the seventh consecutive time that Samsung Electronics has sponsored the prestigious event and the fourth consecutive time that the company has served as WorldSkills’ sole Overall Event Presenter (OEP).

WorldSkills Kazan 2019 is expected to draw approximately 1,400 competitors from 67 countries. Contestants will showcase their skills while representing their country in competitions spanning nearly 60 trades and vocations, including carpentry, engineering, culinary and graphic design, and much more.

The goal for this and each WorldSkills Competition is to inspire competitors to reach new heights and help them turn their passion into a profession. For Samsung, the competition presents a valuable opportunity to support vocational training in countries around the world, and nurture the development of future engineers.

“Samsung Electronics’ sponsorship of our event is meaningful because Samsung believes that companies should play a big role in helping teenagers hone their skills and create their own careers,” said Simon Bartley, President of WorldSkills International.

Samsung has a long history of supporting young workers’ professional pursuits. In addition to hosting the annual Global Samsung Skills Competition, which offers a platform for its skilled employees to enhance and showcase their skills excellence, the company has been a sponsor of Korea’s National Skills Competition and a consistent supporter of Team Korea in the WorldSkills Competition since 2007.

Korea will send around 50 competitors to this year’s WorldSkills Competition, 19 of whom hail from Samsung Electronics, Samsung Electro-Mechanics, Samsung Heavy Industries, and Samsung BioLogics. These talented young Samsung employees will compete in a total of 15 categories, including mechatronics and mobile robotics.

In addition to contributing 1.5 million euros to this year’s event, Samsung plans to install an on-site experience zone that will offer competitors and visitors an up-close look at the company’s latest innovations.

“Samsung has deeply understood the importance of skilled workforce for industry and strongly believed that their skills excellence leads to the competitiveness of their companies and countries,” said DS Jang, Secretary General of Samsung Skills (a division of Samsung Electronics). “That’s why Samsung has participated in WorldSkills movement over ten years and supported young professionals making their dreams and hopes come true through skills excellence.”