“Coding for Kids” on Tour in Austria

Samsung has created a classroom on wheels, touring across Austria in a yellow schoolbus during June/July and September/October of 2016. IT trainers are visiting 11 cities to teach roughly 1,400 children about programming apps and robots. The offering is designed for beginners, guaranteed to be fun and entirely free. Samsung has partnered with experts from the Institute for Software Technology at the Graz University of Technology to provide the educational content. After successful workshops in Tyrol, Salzburg and Upper Austria, the school bus will be stopping next in Vorarlberg on July 4th. 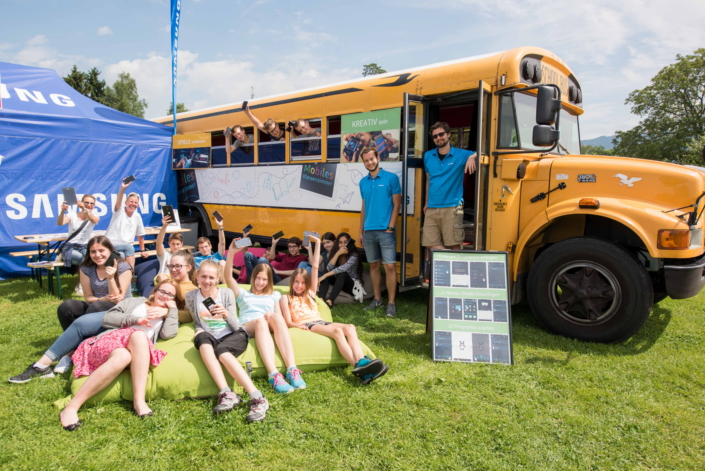 As a leading technology company, Samsung wants to help young people learn new digital skills and understand the internal mechanisms of their smartphone apps. The company is therefore touring Austria with the expert assistance of the Institute for Software Technology of the Graz University of Technology, giving children aged 8 to 14 a playful look at the world of programming and robotics. “We could no longer imagine our lives without software. It is the engine of our economy and now increasingly permeates our private lives as well. We therefore consider it essential to help children understand the digital technologies of the day in order to shape the future for themselves,” says Martina Friedl, Corporate Citizenship & Public Affairs Manager at Samsung Electronics Austria, on the motivation behind the campaign.

In workshops about 3.5 hours long, the children use the Pocket Code App not only to learn the first steps of programming but also to create their own small apps. The method was developed by university professor Wolfgang Slany and his team at the Institute for Software Technology at the Graz University of Technology. “With Pocket Code, we want to inspire young people to create their own games and interactive stories directly on the smartphone or tablet. Thanks to intuitive, Lego-like programming, no prior knowledge is required,” says Slany. The students have a chance to put what they have learned to the test in the concluding Galaxy Game Jam competition. 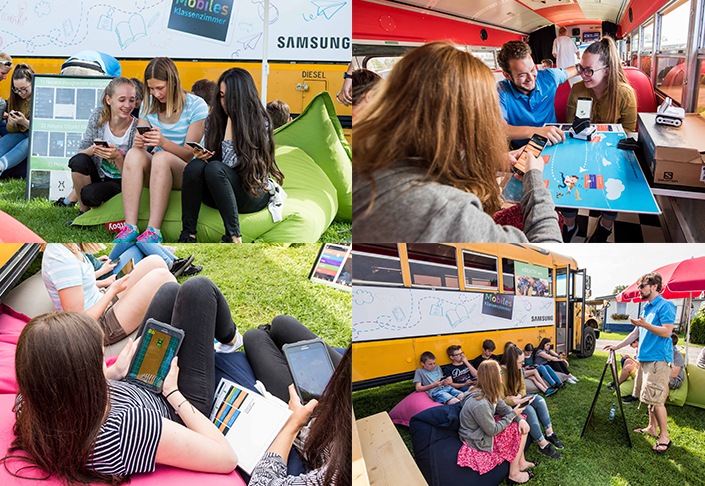 Playful Programming for Students in Bregenz as Well

The mobile classroom will be visiting Bregenz starting on July 4th. A total of roughly 160 children are taking part in the workshops. To offer the children a change of scene from their usual classrooms, the workshops are held outdoors when the weather is nice, just a few minutes away from Lake Constance. A tent provides shelter and shade. The yellow school bus itself is not just the visual highlight of the exciting concept: Beanbags invite students to relax creatively, and tinkering materials allow them to build their own robots. Martin Bauer, head of the department II/8 – IT Didactics and Digital Media of the Federal Ministry for Education and Women, is enthusiastic about the initiative: “Programming is a cultural technology of our day. This gives children additional options for becoming producers of their own digital content and media. Programming strengthens digital competence as well as problem-solving skills and promotes logical thinking.”

Stops by the Mobile Classroom “Coding For Kids”: